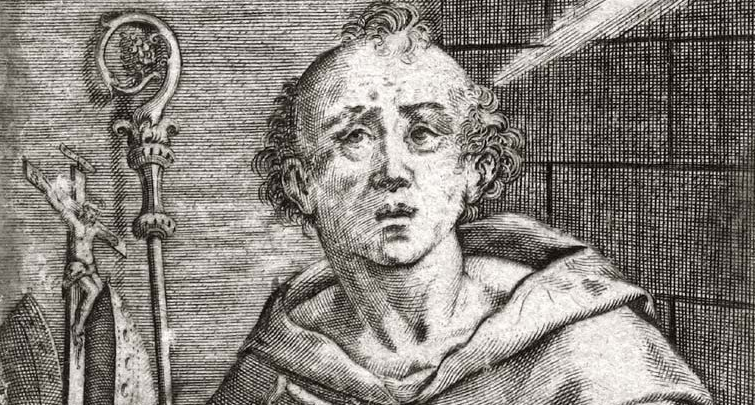 Many Protestant rebels from Luther forward placed mistaken reliance on the works of St. Augustine of Hippo as providing a patristic Fathers-of-the-Church warrant for their new teachings and heresies.

Luther, Zwingli, Calvin, and other adherents of the Augsburg Confession (a document that set forth the beliefs, including some heretical beliefs, of Lutherans and others) employed erroneous interpretations St. Augustine’s work on grace and salvation, “soteriology,” while often ignoring or minimizing his views on the Church, his “ecclesiology.” One scholar referred to this Protestant use of St. Augustine as the “triumph of Augustine’s doctrine of grace over Augustine’s doctrine of the church.”1  One reason for ignoring the ecclesiology of St. Augustine is that it supports the view that the Church of Jesus Christ is the Catholic Church.

Despite the misuse of St. Augustine’s works by the Protestants, his works were not rejected by the Church. In fact, in the Church’s response to the various Protestant schisms and heresies, it was St. Augustine’s thought and teachings that were the basis for many of the efforts of what came to be called the “Catholic Revival,” or “the Counter Reformation”  (from about 1545 to 1648 A.D.). A current-day scholar says this:

Must we conclude, therefore, that when Augustine ‘dominated the Reformation,’ he reigned supreme only in the Protestant camp? Did an unabashed Counter-Reformation simply deflect the power of Augustine’s ideas, leaving a few Catholic thinkers to experiment with them and ultimately to fail? Augustine certainly deserves a more prominent place in the large narrative of the religious changes and divisions of Europe in the 16th and 17th centuries. But that should not come at the cost of Catholicism. If human potential became obscured in his shadow, from which a largely Protestant soteriology emerged, Augustine became a beacon for Catholic truth and a bulwark against Protestant heresy. 2

Even a cursory reading of many of St. Augustine’s works reveals that his view of church is that the church is the Catholic Church. If you decided to reprint every reference of St. Augustine’s to the “Catholic church” and every time he used these specific words, in the over one hundred of his surviving works, you would end up printing literally hundreds of pages. If you highlite the words “Catholic church” in all his writings, many pages will look like the sunrise.

In the excerpts below are some of the most direct on-point quotations of St. Augustine using the words “Catholic church,” and embodying his belief that “The Church of Jesus Christ is The Catholic Church.” The translations used for the quotations below are that of the Scahff series of the late 19th century – almost all of which were done by Protestant scholars. It is noteworthy that in many of these translations the “C” in the word “Catholic” is translated as upper case, with a capital “C.” Citations below are to works of St. Augustine in these translations.

“Keep hold of this, that Christ’s sheepfold is the Catholic Church”  (On the Gospel of St. John, Tractate XLV, 5).

“If you see that you too have been long affected in this way, therefore, and with a like care for your soul, and if now you seem to yourself to have been tossed to and fro enough, and wish to put an end to labors of this kind, follow the pathway of Catholic teaching, which has flowed down from Christ Himself through the Apostles even unto us, and will hereafter flow down to posterity” (On the Profit of Believing, Chap. , 20).

There Is One Church and It Is the Catholic Church

“And so there is one Church which alone is called Catholic” (On Baptism Against the Donatists, p. 417).

“Inasmuch as I repeat, as this is the case, we believe also in The Holy Church, [intending thereby]assuredly the Catholic” (Of Faith and The Creed, Chap. 10).

Heretical Sects and Denominations Are Not the Catholic Church

“ Those who, being outside the communion of the Catholic Church, usurp to themselves the name of Christians, and are not willing in peace to worship the Author of peace, may not dare to possess anything in the name of the Church” (On the Gospel of St. John, Tractate VI, 25).

“The case standing thus, suppose, as I said, that we are now for the first time seeing into what religion we shall deliver up our souls, for it to cleanse and renew them; without doubt we must begin with the Catholic Church. . . . But the question of truth is another; but, what is enough for such as are in search, there is one Catholic, to which different heresies give different names whereas they themselves are called each by names of their own, which they dare not deny. From which may be understood, by judgment of umpires who are hindered by no favor, to which is to be assigned the name Catholic, which all covet” (On the Profit of Believing, Chap. 19).

“This same is the holy Church, the one Church, the true Church, the catholic Church, fighting against all heresies: fight, it can: be fought down, it cannot. As for heresies, they went all out of it, like as unprofitable branches pruned from the vine: but itself abides in its root, in its Vine, in its charity. The gates of hell shall not prevail against it” (On The Creed, Chap. 14).

The Catholic Church Is the Body of Christ

“ In the body of Christ, that is to say, in the catholic Church, they shall not die eternally” (City of God, Chap. 20).

These two responses can be discussed and debated ad infinitum, ‘til the cows come home, and until the folks talking are all blue in the face – and they have been.

We know Jesus has one Church. Jesus said “And upon this rock I will build my church” (Matthew 16:18). He did not say “churches,” plural. He also told us, “I am the way the truth and the life” (John 14:6). He did not say ways, truths, and lives. One interesting point for discussion then is what do you do when, regarding some theological, moral, doctrinal, or scriptural teaching, one “church A” says “X” and the other “church B” says “Not X”  ? Since there is only one truth, how do you decide which “church” has it right – is it X or Not X ? In a Church that is the Catholic Church, this is not a problem.

Another focus for discussion of whether the Catholic Church is the one Church of Jesus Christ, is to review several sayings of Jesus in the form of “unless you do this, you will not be in heaven.” In which Church can you do the following: a.) eat the flesh of Jesus and drink His blood (John 6:53-56); b.) change and become like a little child (Matthew 18:3); and c.) be born again of water and the spirit (John 3:5) ?

Dr. Pabel, in his article mentioned above, makes this point:

“The Large Catechism (of Peter Canisius) presented Augustine as doctor vere catholicus, “the truly Catholic doctor.” Cited repeatedly by Canisius, his “truly Catholic” Augustine stands out as an eminent ally of Roman Catholicism.”3

There is no dispute that Augustinian ecclesiology is Catholic ecclesiology; and that the Church of Jesus Christ is the Catholic Church.