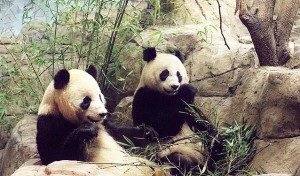 My long-time English friend, Ann Farmer, has just sent me an interesting article from The Telegraph (London), which tells how all of Scotland is rejoicing at the prospective pregnancy of a captive giant panda. Tests indicate that the female, named Tian Tian (“sweetie”), has conceived but that implantation—that next stage in her pregnancy—is still a few weeks away.

At the same time, we have Bill and Melinda Gates, population control enthusiasts extraordinaire, feted for funding a so-called “remote control” contraceptive for female humans. The new implant is said to release powerful, steroid-based drugs that shut down a woman’s reproductive system whenever it is turned on. The makers of the device want to have it ready for public use by 2018.

Pardon me for remarking upon the contrast.

Ann tells me that Britain’s National Health Service (NHS) is eagerly anticipating their chance to use this new anti-personnel weapon, since it can be left in a woman’s body for up to sixteen years. The old implants like Norplant and Implanon had to be changed every three to five years. How bothersome.

The question is: who controls the switch of the new device?

This is a real concern, given that in the past Norplant has often been implanted in poor women in the developing world without their foreknowledge or consent, and generally without informing them of the sometimes serious side effects, such as blindness and blood clots. I suspect that the Chinese government, for instance, would find the new device very, very useful in its war against its own people. I’m guessing that the population control police would keep the remote control out of the hands of the women themselves—and keep it switched on until they decided that the women should be allowed to give birth. If ever.

And when a woman decides that she wants the device removed, what then? Presumably the British doctors who work for the NHS would honor her request, but I doubt that the government of, say, Vietnam, would be nearly so responsive. After all, Vietnam has a rigorously enforced two-child policy. (“Sorry, comrade. The switch stays on. The rules say you have to wait another five years to have your second child.”)

And then there is the actual procedure itself. Norplant is notoriously difficult to remove, with one doctor telling me that he had to “dig, and I mean really dig” to remove the silastic capsules. How much more difficult will it be to remove a device that has had sixteen years to embed itself in scar tissue?

Ann was less concerned about the side effects on women, serious though these are, than she was about the psychological effects. How is a woman to feel when society welcomes a panda’s offspring, but declares that hers are of such negligible value that she should be chemically sterilized?

Progressives seem to assume that animals have a natural right to have babies, but that poor women don’t. So they view the implantation of a chemical “bomb” armed with a computer chip into the bodies of impoverished women as an advance.

Or as Ann Farmer cogently put it, “Wealthy people in particular don’t want poor women to have babies and so tend to treat them worse than animals.”

And pandas are inseminated while humans are neutered.