Trending Now
You are at:Home»Business & Work»Baby Modeling in the Big Apple
By Amy Bonaccorso on February 28, 2013 Business & Work, Featured, Parenting 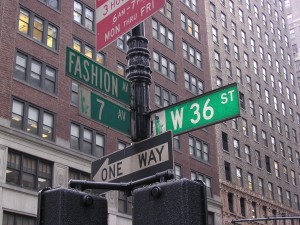 My son is an adorable energizer bunny. How can I wear this child out? And, keep myself mentally stimulated as well, if possible?

I got an idea. It seemed far-fetched. Baby modeling! Baby modeling is jumping in popularity among moms who want to earn extra money and be together with their child.

After witnessing our baby’s cuteness and affable demeanor, a family member with an impressive web of entertainment biz connections reached out to a talent manager. The manager gets my son gigs…in the Big Apple. We live a few states away, but can take a train into Manhattan without an issue, or so I thought.

His first audition was all about anticipation. I woke up at 2:30 a.m. to make a train that left just after 4:00 a.m. I packed a backpack the night before with baby essentials and brought a lightweight umbrella stroller with a toy attached. In the morning, I tucked my sleepy angel into an Ergobaby to board the train. To my delight, he drifted off to sleep in his carrier. I learned that trains are easier than car rides if you can sit in the handicapped area! Baby has diaper changes, milk, snacks, anything he or she could want at their disposal.

We arrived in Manhattan’s massive Penn Station and I located our preferred exit. With my carefully arranged and heavy menagerie of luggage, I thought an elevator would be helpful. I asked a police officer to direct us to one. He said, “The escalator won’t work?” I said, “Well, I guess so, but I’ve never done that before with the stroller.” He offered to show me how to get a stroller up an escalator and led the way. Surprisingly, a woman nearby even offered to help. I think New Yorkers are nicer than Washingtonians…gasp!

We quickly walked to an address in Chelsea at around 8:00 a.m. However, I had the address wrong in my head by one digit. The confusion caused me to circle a block a few times like a lost bird. But praise the Lord for iPhones! I checked our invitation and finally got us to the right lobby.

We were the first ones to arrive at the studio. We were so early that Mommy, who was starving, could even fetch a bagel from a street vendor.

We filled out some paperwork and sat in a waiting room. Soon, four other moms and babies showed up. When it was time for the audition, a lady rushed in to grab the first baby. She was all bubbly and had kneepads on.

Each baby was taken for a photo shoot that lasted only a minute or two. When it was my baby’s turn, the casting lady whisked him away from me. He greeted her with a huge smile. The judges laughed as he beamed for the camera. Then, before I could think about what could come next, he was back in my arms.

We were done within 30 minutes and made it home before dinnertime. Baby was chillaxed, but Mommy ached from carrying so much weight. Really, moms do a lot of work to support baby modeling careers. We have to be a special breed.

Before I could recover from the strain of the audition, we got word that my son was a “principal baby,” which is like a finalist. He was called back for a paid photo shoot. Another trip was planned. That day happened to be the first snow day of the season.

We made it to New York City without getting up super early, but driving to the train station nearly gave me a panic attack. Schools and workplaces were closing as we drove.

As I walked through the snow to get to the studio, I wondered if this was just too much. I hated having my baby in the cold. I put him in the Ergobaby, buttoned my coat over him, and nearly broke my back in two to keep him warm and my conscience from spraying guilt at me. Surprisingly, he hardly fussed and curiously looked at the fluffy snowflakes that fell all around us. But, I still felt bad and lamented that I didn’t have a stroller with a plastic bubble to protect him from the chilly elements.

That photo shoot was more difficult than the audition. The babies were put in white outfits to match the white on white studio, and didn’t have much space to play. To make matters worse, the shoot ran very late. The photographer was famous, my son had to pose with fake parents, and well…everything had to be perfect. I was even on the floor, trying to help the crew get the winning shot. This time, Baby wasn’t having as much fun. There, I socialized with other moms and learned how hard they work to keep up with the demands of short notice auditions and photo shoots.

It’s easy to forget that baby modeling, which seems glamorous, is work. Our trip back was hard because we got stuck in rush hour, with other busy workers.

Since our first foray, I’ve accepted that routine baby modeling in the Big Apple is for stay-at-home moms who live closer to the city. Though Amtrak is a great way to travel with an even-tempered baby, I’ve learned that tickets get crazy expensive if you are not able to purchase them in advance. Travel expenses quickly swallow your earnings and stressful trips also take the fun out of the experience. We recently turned down an audition for Toys ‘R’ Us and are now checking into local opportunities.

So what’s my advice to moms aspiring to try baby modeling? Your baby needs to be photogenic and friendly, and you need to be flexible and motivated. But above all else, you need to live within a reasonable distance from the gigs. Baby modeling can be very exciting, but as with any job, you have to have a reasonable commute.