Trending Now
You are at:Home»Columnists»Baseball Fouls
By Marge Fenelon on May 17, 2011 Columnists, Featured, Parenting 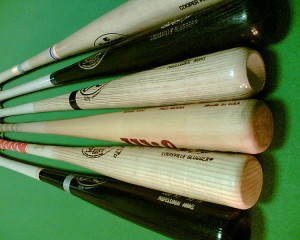 My husband and I went to a Milwaukee Brewers game this past Saturday. Our two oldest sons had tickets they couldn’t use, so they offered them to us. We gratefully accepted. It was a great opportunity for a little getaway, and I hadn’t yet been to the new Milwaukee County Stadium (I know, it’s been a long time since I’ve been to a pro baseball game).

We really enjoyed the game,  not only because the Brewers won, but also because it was a fairly exciting game. We had decent seats — right behind home plate — and since it was just the two of us, Mark could explain all the baseball ins-and-outs, so to speak, of which I had absolutely no knowledge. I know a lot of stuff about a lot of things, but as far as sports go, I’m a dud.

One time a radio host was making small talk with me during an interview and asked me, “How ’bout them Reds?”

I had no idea what a “red” was, and therefore no idea how to answer him.

After an awkward silence, the host said, “I hear they’re playing Milwaukee next week.”

Reds…Milwaukee…my brain was fishing frantically for a clue to what he was talking about.

Thanks be to God the host caught on that I’m sports-challenged and so he changed the subject. Entirely. And permanently. I’ve been on that show a number of times since and the host has never again breached the topic of sports of any kind. Smart guy.

Well, back at the ol’ ball game… We were having a wonderful time together. The seats in front of us were occupied by a couple of buddies who were really into the game; it was fun watching their enthusiasm/excitement/frustration as it rolled around in cycles with each play. Next to Mark was an older gentleman, a seemingly die-hard Brewers fan who was so intent on the game that we worried at times whether he was still breathing. Next to me were a father and his pre-teen daughter enjoying a father-daughter afternoon together. Behind us was a soon-to-be wedding party, on what seemed to be a get-acquainted outing.

How very sweet, I thought to myself. But as the game progressed, so did their volume and obnoxiousness. The topic changed from cordial conversation to lewd, suggestive, filth. What was spewing out of their mouths was foul and disgusting! Every sentence was strewn with four letter words, and I guarantee they weren’t talking about l-o-v-e.  As they got louder and louder, it was more and more difficult to ignore them. At first the girl next to me seemed oblivious to what was going on. Thank goodness, I thought to myself. I noticed her father shooting concerned looks back at them, but they were oblivious to his alarm. Eventually, the girl’s curiosity got the best of her, and she completely keyed in on their conversation, turning around to take in the spectacle.

I took a moment to pray for them — to pray, that somehow they would come to their senses and realize that there was an impressionable young girl listening to every word they were saying. Poor, misguided young people, I thought to myself. I bet they don’t even realize how foul they sound.

Then, one of the young women behind me said to the bride, “Hey, you look just like your blanket-blank mother!”

“I do?” said the bride. Then she leaned past her husband-to-be (shoving her knee into my back) and called out to her mother, who was sitting a few seats down the row, “Hey! Mom! She said I blanket-blank look just like you!” The mother merely laughed.

I was shocked. The parents were right there! And they didn’t do a thing! My shock turned to horror, then deep sorrow.

By this time, the father sitting next to me with his daughter could take it no longer. “Enough,” he said. “Let’s go.” And he marched her down the stairs and to the exit.

Their time together at the ball park had been ruined. And, why? This is what I kept asking myself the rest of the game and all the way home. Why do people have to use such language? Why do parents sit back and let it happen? I can understand letting an explicative fly accidentally in a stressful situation, but to use them in a normal conversation!? I had myself been inclined to turn around and ask them to curb their foul mouths, but when I heard that the parents themselves were letting it go, I didn’t see any hope. I settled instead for drowning them out by constantly questioning Mark about what was going on in the game. At that point, I was happy for my baseball ignorance!

I remember once when one of our older kids let a foul word slip in a conversation at home.

“Excuse me?” I glared. “You know that is not allowed in our house under any circumstances.”

“Sorry, Mom,” came the reply. “But… you hear that stuff everywhere these days. Everybody does it.”

“Well, we’re not everybody,” I retorted. “Let their parents handle it.”

No I realize that their parents probably don’t handle it. Or, if they do, their attempts have been ineffective.

I can’t do anything about the fouls that flew at the baseball park this past weekend, and I regret that. But I’ve resolved that, in the future, the fouls won’t get by me. I will say something — with charity, but directness — because someone else might not.