The most vexing video of 2011 may be this clip of Congressman Dan Lungren questioning Assistant Secretary of Defense Paul Stockton on December 7. Though Stockton’s evasiveness is in line with the government’s history of not calling Islamism the enemy — recently exhibited by scrubbing FBI training materials and labeling the Fort Hood attack as “workplace violence” — his ability to twist himself into knots to avoid stating the obvious deserves special recognition:

Lungren: Secretary Stockton, are we at war with violent Islamist extremism?

Stockton: No, sir. We are at war with al-Qaeda, its affiliates —

Lungren: Okay, I understand that. My question is: is violent Islamist extremism at war with us?

Stockton: No, sir. We are being attacked by al-Qaeda and its allies.

Lungren: Is al-Qaeda — can it be described as being an exponent of violent Islamist extremism?

Stockton: They — al-Qaeda are murderers with an ideological agenda —

Stockton: Al-Qaeda is a violent organization dedicated to overthrowing the values that we intend to advance. 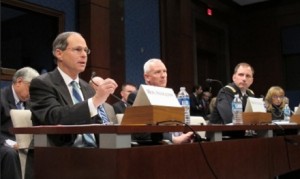 Assistant Secretary of Defense Paul Stockton participates in a joint House and Senate Homeland Security committee hearing on “Homegrown Terrorism: The Threat to Military Communities Inside the United States.”

After asking to hear the question again and receiving a cold stare, Stockton protested that the U.S. is not at war with Islam, which Lungren had never suggested, and said, “I don’t believe it’s helpful to frame our adversary as Islamic with any set of qualifiers.” However, he did reluctantly admit that a serviceman identifying himself as a “soldier of Allah” could be a bad sign.

Evoking both laughter and horror, the exchange — which recalls a similar one with the attorney general bobbing and weaving in 2010 — does much to illustrate the absurdity of the speak-no-jihad routine. But what is its source? Does government refusal to “frame our adversary as Islamic with any set of qualifiers” indicate that awareness of Islamism and its perils is totally absent, or is the pussyfooting mostly just for show? Also, is the latter alternative tolerable?

Given the extensive data in the hands of U.S. security officials, the second option seems more likely: a degree of understanding exists, but public equivocation is employed for reasons that range from genuine, if misguided, strategic concerns to crass political calculations. Yet this is no cause for glee. Though preferable to abject ignorance, not being frank is problematic as well.

The conflict with radical Islam is fought not only by government-trained professionals in far-off lands. Violent jihad has targeted places like Little Rock and Times Square, while stealth jihad is ubiquitous. Ordinary citizens thus find themselves on the front lines and have a key role to play by looking out for potential terrorist activity and resisting nonviolent Islamists, but the feds appear determined to keep people too uninformed about the nature of the threat to be as useful as they otherwise could. Hence, even if U.S. leaders do have some grasp of Islamism, they fail Americans by not conveying basic knowledge of the enemy’s ideology through untwisted words.