Trending Now
You are at:Home»Columnists»Benedict at 85
By Russell Shaw on April 20, 2012 Columnists, Featured, Leadership 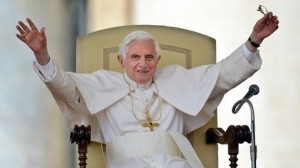 Nearing his 85th birthday on April 16 and, three days later, the seventh anniversary of his election to the throne of Peter, Pope Benedict XVI—even after so many years—apparently remained something of an enigma for many people. A small but telling incident before Easter may hold a key to understanding this unusual man.

In case you missed it, here’s what happened.

Preaching at the Chrism Mass in St. Peter’s Basilica on Holy Thursday, Benedict spoke with regret of  “a group of priests from a European country” who’d issued “a summons to disobedience” even to “definitive” Church teaching. That was a reference to a group of several hundred Austrian priests who’ve given their dissent the provocative name “Call To Disobedience.”

Benedict said he wishes to believe these men desire Church renewal. But, he asked, is this how to get it “or do we merely sense a desperate push to do something to change the Church in accordance with one’s own preferences and ideas?”

Contacted for reaction by the Associated Press, a leader of the group greeted the papal remarks dismissively. Although “listening with interest,” said Monsignor Helmut Schuller, he took the words only as questions, not an invitation to halt and desist.

From the start, it’s often been that way for Benedict XVI. Almost his first act after becoming pope was to meet with Father Hans Kung, the Church’s most prominent dissenter and a bitter personal critic of the former Cardinal Joseph Ratzinger when he was prefect of the Congregation for the Doctrine of the Faith. Benedict was his usual gentle, cordial self. Father Kung apparently was friendly, but he hasn’t budged an inch since then.

A Catholic woman I know sums up what others feel about this pope: “Back when he was in charge of CDF, all we heard was what an ogre he was. Then he’s elected pope, and he turns out to be a kindly, loving man. Instead of an ogre, he’s a universal grandfather.”

That has several explanations. The difference between the job descriptions of pope and CDF prefect accounts for part of the perceived transformation, from the Ratzinger that was to the Benedict that is. Part of it also lies in his enemies’ campaign to discredit the Ratzinger name during his CDF years.

But something else also is operative.  As pope, Benedict is highly sensitive to the pastoral dimensions of his ministry. Crackdowns are few and far between. Like the professor he is at heart, he speaks the truth of the gospel as he sees it–clearly, persuasively, with entire sincerity—hoping listeners will respond in like manner.

Attractive, yes, but how practical is another matter. So far, the results aren’t highly encouraging, whether it’s dissident priests in Austria or an ultra-traditionalist group like the Lefebvrist Society of St. Pius X, which Benedict has sought for years, without much success, to coax back into full communion with the Church. (As this is written, there are reports that Rome and the SSPX may be close to agreement. If so, it’s a tribute to Benedict’s forbearance.)

For a man of lesser faith, the disappointments and rebuffs would be discouraging. But Pope Benedict at 85 plainly has his eye on the future. The projects he’s pushing these days —- the New Evangelization, the Year of Faith -— are aimed at the long-term renewal of the Church, and it’s hardly likely he’ll be around to see it happen. But so what? In God’s providence, all will be well in the end. Do you doubt it? Universal grandfathers don’t.