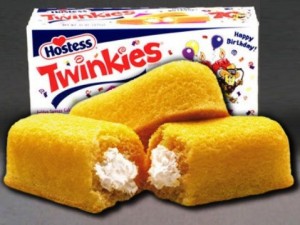 Drat! I’m bummed—saddened by the news that the Hostess company, home of the Twinkie and other venerable sugary snacks, is shutting down.

I’ll bet I haven’t eaten more than three or four Twinkies in the last 30 years, so the demise of Hostess doesn’t adversely impact my lifestyle. It’s just that, for baby boomers like me, the Twinkie has historic significance in popular culture. Being a kid in the ‘50s meant watching “The Mickey Mouse Club” and “The Lone Ranger” and snacking on Twinkies and Tootsie Rolls. Twinkies were as American as baseball. Now the company that makes them is facing liquidation. Why?

Because the bakery union wouldn’t agree to the concessions needed to keep their employer afloat. Look, I don’t wish lower wages on anybody, and having personally worked with great people in two unions (UAW and NEA), I have a natural sympathy for working men and women, but I can’t respect a union that would kill off the Twinkie and their own jobs due to a false sense of pride.

Hostess lost $341 million last year. The money for the compensation that the bakery union wanted simply wasn’t there. Even the Teamsters union, whom nobody would ever accuse of wimping out during contract talks, looked at Hostess’ books and acknowledged that the only way to keep the operation afloat would have been for workers to accept lower compensation.

The bakery union, however, would have none of it. They couldn’t have been so stupid as to misunderstand the simple arithmetic of Hostess’ financial predicament, so one can only conclude that they went berserk with ideological madness: “better to destroy the company than to make concessions to management” seems to have been their cold-hearted calculus. The bakery union lost sight of an important truth understood by Samuel Gompers, the founder of the American Federal of Labor, over a century ago: what workers need is a company that operates at a profit.

The pending liquidation of Hostess raises some interesting questions: If people lose their jobs because they committed economic hara-kiri, should they still be entitled to receive taxpayer-funded unemployment? Should the Teamsters union members, whose jobs are also being lost because of the bakery union’s decision, be allowed to file civil suit against the bakery union for compensatory damages for the losses they will suffer from the latter’s reckless actions? Can the rank and file of the bakery union sue their union leaders for professional malpractice? (The malpractice is worse in the union’s case, because most doctors convicted of malpractice don’t intentionally try to harm patients, whereas the Hostess bakery union could see that their action would have a lethal effect, and they went ahead with it anyway.)

It is possible that Hostess has been living on borrowed time. Tastes have been gradually shifting to healthier foods and Hostess’ complex financial structure (372 collective-bargaining agreements, 80 health and benefit plans, and 40 pension plans, according to The Wall Street Journal) might have guaranteed its eventual demise anyway. Still, for the union to kill off the source of their own members’ income is ghastly. Can there be any silver linings in such a monstrous act? Perhaps.

Maybe union members will start demanding leadership that helps companies survive instead of killing them off. Maybe more union workers will come to understand which is the better choice for them: working zero hours per week at X dollars per hour or 40 hours per week at X-Y dollars per hour. Maybe the Twinkie brand will be sold to another firm so that this iconic snack doesn’t go the way of the dodo. Maybe Americans will see that a corporate bankruptcy—even a corporate liquidation—doesn’t mean that the company’s product has to disappear, that its assets can still be put to productive use, and that at least some of its employees can continue to do the same kind of work under a different business plan based on an economically rational and sustainable cost structure.

Maybe, just maybe, it will dawn on Americans that the same stubborn and ultimately destructive denial of reality that brought down Hostess and possibly killed the innocent Twinkie is the same willful madness that we see in Washington, where ALF-CIO boss Richard Trumka flatly opposes government spending cuts and Senate Majority Leader Harry Reid refuses even to consider Social Security reform. Like the bakery union at Hostess, these powerful national figures seem ideologically incapable of recognizing the simple fact of life that they want more than the country can afford. Call it folly or madness or whatever, but if we don’t wake up and change our ways, there will be far more economic destruction than just the loss of the venerable Hostess brand.