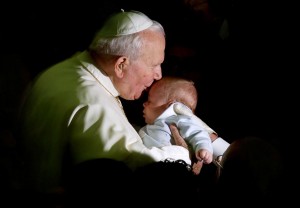 Today is the feast of Blessed John Paul II. He is often referred to as John Paul the Great, but I will always know him simply as JPII. No doubt he was a mighty world/religious leader, but to many of us who grew up under his pontificate, he was also a gentle and humble shepherd who seemed as close and personal to us as our own fathers.

Growing up in Poland during the Nazi occupation of that country during World War II, JPII experienced first had the horror that a culture that does not value all human life produces. Today the struggle for human rights and freedom continues, so, for me the greatest “legacy” he left us was his enthusiasm for articulating the Church’s commitment to building a culture of life.

There are a number of ways in which a culture of life must be built. First, quite obviously, is recognition and respect for the unique dignity of the human person and our relationship to God and each other.

Theology of the Body (TOB) is JPII’s vision of the human person and what it means to be made in the “image and likeness of God.” In writing Witness to Hope: The Biography of Pope John Paul II, author George Weigel concluded that TOB, a collection of 129 Wednesday audiences given between 1979-1984, was JPII’s

“longest-lasting theological contribution to the Church…a bit of a theological time bomb…that would explode within the Church at some indeterminate point in the future…reshaping the way Catholics think about our embodiedness as male and female, our sexuality, our relationships with each other, our relationship with God – even God Himself”

In TOB, JPII encourages a true reverence for our bodies and the gift of our sexuality and challenges us to live it in a way worthy of our great dignity as human persons (from the TOB website).

The incomparable worth of every human being, the late pontiff points out inEvangelium Vitae, is revealed in the Incarnation. When the Son of God came to earth and took on human form, he came that we might have life (Jn. 10:10)!“Thus the deepest element of God’s commandment to protect human life is

the requirement to show reverence and love for every person and the life of every person.”

This is not only true for weakest and most innocent members of our society – the poor, the sick, the unborn, the elderly, the embryo in a petri dish – but it includes loving the life of a criminal and our enemies (Mt. 5:44), as he showed by visiting and forgiving the man who tried to kill him.

By and large, the “culture of death” that we are experiencing here in the West is a direct result of the breakdown of the family. In Familiaris Consortio, John Paul recognizes the “precious value of marriage and of the family“, especially when it comes to educating the essential values of human life. The family is the “first vital cell of society” and by embracing the plan of God for marriage and family, Christian families will contribute to the “renewal of society and of the People of God.”

Related to that, in Evangelium Vitae, John Paul says:

It is an illusion to think that we can build a true culture of human life if we do not…accept and experience sexuality and love and the whole of life according to their true meaning and in their close interconnection (Evangelium Vitae n. 97)

Along with the Theology of the Body he also wrote, before he became pope, an incredible book on responsible love as it relates to marriage and sexual relations. Love and Responsibility is a deep and frank discussion on everything from “The Person and Love” to “Sexology and Ethics” and it would rather shock people to see exactly what a celibate priest understands and has to say on the matter. His 1994 Letter to Families, too, is a treasure and has been called a compendium of John Paul’s thought on human sexuality. A kind of mini TOB.

A culture that respects all human life must have a joyful acceptance of human suffering. As we saw with the starvation of Terri Schiavo and many cases like hers, our society

has a great disdain for human suffering which leads to the tragic death and outright murder of people whose lives are considered worthless.

We can counter this by following the example of JPII whose physical health gradually deteriorated after the gun shot wound that almost took his life. Despite the obvious pain and suffering that came with his sickness, the pope never let it slow him down. He embraced his humanity with all its hardships and “imperfections.” Even in his final days, when his health was at its worst, he struggled to be in front of the faithful. In 1984 he also wrote the Apostolic Letter on the Christian Meaning of Human Suffering, Salvifici Doloris.

Finally, it must be said that those living according to the culture of death are not without hope. In his 2002 address to the U.S. Cardinals in response to the sexual abuse scandal John Paul said,

“we cannot forget the power of Christian conversion, that radical decision to turn away from sin and back to God, which reaches to the depths of a person’s soul and can work extraordinary change.”

A culture of life requires recognition of, and a relationship with, He who is Life itself. This is to be its very foundation, for Christ said, “I am the way and the truth and the life” (Jn. 14:6) and those who believe in Him shall not perish, but have eternal life (Jn. 3:16)!

God is nothing if not merciful and it is never too late to come back to Him with all our heart. As much as we want to save lives, as pro-lifers and Christians we should have a great desire to help save souls as well.

JPII was a great leader in the fight against the culture of death. Hopefully we will learn from his example and work to advance the culture of life with the same enthusiasm as the late pontiff.

Blessed JPII, WE LOVE YOU! Pray for us! 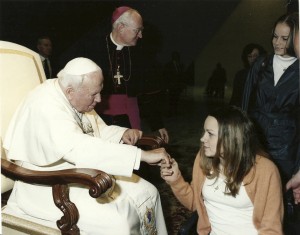