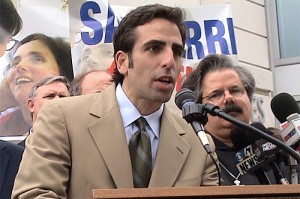 Bobby Schindler, the brother of Terri Schiavo, is seeking permission to act as a guardian of a New York State man who is in a persistent vegetative state.

Schindler is petitioning New York State’s Supreme County to serve as guardian for Gary Harvey, a Chemung County resident who suffered a traumatic brain injury after falling down his basement steps in 2006.

His wife, Sara, had him placed in a nursing home while she returned to her full-time job.

But after a family dispute over Gary’s assets, State Supreme Court Judge Robert Mulvey ruled that Sara Harvey was not a suitable guardian for her husband and gave the county authority over his care.

When the county took over guardianship, Mrs. Harvey was blocked from making any decisions about her husband’s health and medical welfare.

Since then, Mrs. Harvey has been fighting a legal battle with Chemung County officials and the New York State Court System to bring her husband home.

Her efforts became more urgent when, in 2009, the ethics committee at the nursing facility requested permission from the court to remove Mr. Harvey’s feeding and hydration tube and issued a “do-not-resuscitate” order (DNR).

That’s when Bobby Schindler got involved.

Schindler’s sister Terri Schiavo died in 2005 in one of the most publicized end-of-life cases in U.S. history, after her husband and legal guardian Michael Schiavo requested the removal of nutrition and water from his severely brain-injured wife.

The court in that case complied, over the objections of Mrs. Schiavo’s family, including Bobby Schindler. Schindler now heads up the Terri Schiavo Life and Hope Network, which defends other vegetative patients from death by starvation and dehydration.

In 2009, the Chemung County court denied Harvey’s caretakers’ request to remove food and water, but the DNR remains in place. Mr. Harvey is still under the control of Chemung County, despite the fact that the county tried to end his life.

“I have raised the question many times, ‘How can Chemung County, Guardian of Mr. Harvey, be acting in his best interest when they, in fact, tried to kill him?’” said Schindler. “From all indications, it appears that Mr. Harvey has been warehoused and denied the opportunity to receive the care and rehabilitative services that would benefit his condition.”

Schindler hopes that by filing for guardianship, he will force the court to acknowledge that Mr. Harvey deserves the chance to receive aggressive therapy and rehabilitation. Schindler says his extensive experience with brain-injured patients should help Mr. Harvey get the help he needs to possibly significantly improve his quality of life.