Trending Now
You are at:Home»Learn & Live the Faith»Apologetics»Book Review: By What Authority by Mark Shea
By Mary Kochan on January 2, 2014 Apologetics, Evangelization, Featured, MyChurchParish.com, On Books 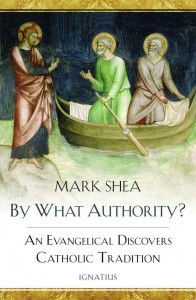 It is quite another reading experience for the Protestant just beginning to make inquiry about the Catholic faith.  There were moments in my own journey when I threw a book down — exasperated that it was so compelling — only to pick it back up again moments later. You cannot follow Jesus without following the truth — no matter where it leads.

We all know where the protagonist will end up: joining the Church. But the delight is in following the convert’s adventure, which covers, not time and distance, but terrain of the mind and emotions. When the author of the story is a writer of wit and good humor, he draws us along easily as he fords doubts, wends his way through evidence, and scales objections.

The release of an expanded and updated version of Mark Shea’s 1996 By What Authority? (subtitled: An Evangelical Discovers Catholic Tradition) is your chance to renew, or make, your acquaintance with one of the best conversion stories you can ever read – to follow a keen mind keenly interest in the truth.  Instead of adhering to a strictly chronological account of his conversion, Shea covers his material topically. The initial probing questions about, for example, how Christians can respond to modernists, how we know which books belong in the Bible, how we know that abortion is murder, how we know polygamy is invalid for Christians — among other issues — always lead to one place: Apostolic Tradition.  Meanwhile the Protestant position on Tradition is confused and confusing. On one issue, deny Tradition is needed and holler “Bible alone!” On the next issue, make use of Tradition, but deny you are you making use of it. On another, admit you are relying on Tradition, but deny that the Tradition on which you are relying is “Catholic.”

Finally after everything has been examined, the potential convert is stuck with the Church. Being stuck with the Early Church Fathers and martyrs, well, that’s one thing. Being stuck with Sts. Augustine and Thomas Aquinas, well, hey, not so bad….  But the Church the convert is stuck with is the local parish church, is the Church of cringe-worthy headlines, is the Church of us – and we ain’t always so pretty. In this update of his story, Shea looks at how we can possibly make the case for such a scandal-ridden Church — hint: without pretense or pretending and with honesty and humility. Shea is very clear-eyed on this issue and his treatment of it is worth the price of the book.

I think there is a moment for every convert when all the pieces except one have fallen into place.  When we know we can’t unlearn what we have learned. When we have ceased being content outside, but we hesitate at the door of THIS. “Oh, no, not THIS!” We will never know how many stop there, with every intellectual barrier down, but WILL NOT become Catholic. For the convert though, the journey of the mind is done and the heart only can answer – the will surrenders in that obedience which is the one sure sign of love.

And Mark Shea loves Jesus and His Church and has never stopped loving the Protestants who taught him to love Jesus and to revere the Scriptures. While there are moments of a sort of gentle ribbing of Protestants, Shea is right there with them, “we Evangelicals.”

We Evangelical Catholics will find this book an invaluable resource in helping Protestants we love to consider the Catholic faith and bolster our own. Resolve to read By What Authority? in 2014.