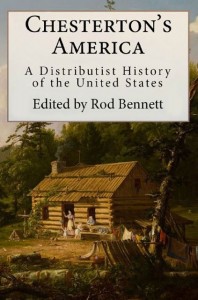 To recommend any book, I should at least be able to say to you that it is a pleasure to read. This book is a pleasure indeed! But saying the least is not my problem with reviewing Chesterton’s America: A Distributist History of the United States. My problem is having the space to say all the deserved good things about it. So let me start with the bottom line. You should get and read this book. There is not another book as important, and few as delightful, for thoughtful Catholic Americans (really all American Christians) to read at this moment.

Chesterton’s America is friendly and accessible, even while being urgent and sobering.

An exchange recorded by United States Constitution signer James McHenry illustrates our need. Among the citizens gathered outside of the Constitutional Convention of 1787 was a woman who asked Benjamin Franklin upon his exit, “Well, Doctor, what have we got, a republic or a monarchy?” Franklin responded unhesitatingly, “A republic, if you can keep it.”  Many of us would be no less hesitant to declare that it has not been kept. And even those who would not make quite so bold an assertion at least vaguely sense that something vital has been lost.

But what exactly and how? Only a story could begin to answer and Chesterton’s America is that story — told with all the narrative verve you should expect from the name “Chesterton” (and from the name Rod Bennett*!).  The Chesterton we encounter most in these pages is not GK, but his brother Cecil, who, as the First World War drew to a close desired to pen for his fellow Englishmen an accessible history of their great ally across the pond.

Hence this history is our story — through the early part of the 20th century — as a told by a friend. It is very pointedly not the story that most of us have in our heads. It is neither the American mythology we absorbed as children – and still teach to children — that turns the Pilgrims into Founding Fathers (like this) and makes slavery the single pertinent issue of the Civil War (like this). Nor is it the decidedly unfriendly story that portrays Columbus as merely the first in a line of rapacious racist conquerors indulging in ruination of a pristine paradise.  However  often they sink to demonic depths or rise to heroic heights, men are neither devils nor angels and the Catholic understands this. Hence we get an account of America marked by sobriety: by clarity of thought, keenness of vision, and steadiness of bearing — and in total opposition to the inebriation of the political spirit.

Although the backbone of this book is Cecil Chesterton’s text, Rod Bennett’s handing of the material deserves acclaim. He has interlaced the original with pertinent writings from the more famous of the Chesterton brothers and from English historians Hilaire Belloc and Christopher Hollis, along with Herbert Agar of Kentucky. It is a testimony to Bennett’s considerable narrative skills that these amplifications are mated to the Chesterton text so seamlessly that the flow of the story is not disturbed, but rather enhanced. Bennett’s own notes are essential clarifications that intrude only when necessary.  As an editor, he has done the good and faithful thing: placed himself at the service of the material, the authors, and the readers.

What makes this book so urgent for us as Catholics and as Americans is that the Great Recession has created a strange and wonderful opening for us. The shattered dreams of the Capitalist system would likely drive a mass exodus to Marxism if every attempt to instantiate that system had not so dramatically collapsed in living memory. With the rubble of one materialistic “ism” behind them and another falling in ruins around their ears, our once self-confident secular compatriots seem momentarily open to considering, of all things, what the Church has and has had to say on economic issues.

Distributism – an effort to apply the social teaching of the Catholic Church to the modern world – has been bubbling up as a topic with increasing frequency. Unexpected people are being caught reading Catholic stuff (even Catholics!), even hundred-year-old encyclicals . People who live in a condo and commute within a megapolis to a job with an industrial multinational are arguing about agrarianism. Seriously.

Chesterton’s America: A Distributist History of the United States demonstrates for us what American history looks like through the eyes of those whose thinking about man’s economic life – as with their thinking about man as a being — is shaped by Catholic truth. It gives us hope that we, looking about us at the history we live inside, can shake off political intoxication to see with the same clarity and find a way to apply the teachings of our faith to our families, communities and, God help us, our republic.

*Rod Bennett is the author of Four Witnesses: The Early Church in Her Own Words (Ignatius Press, 2002) which skillfully blended his own narrative text with the writings of four of the Early Church Fathers — Clement, Ignatius,  Justin Martyr, and Irenaeus — to tell the story of the first two hundred years of the Christian Church, available in paperback or on Kindle. His first novel (2012) was The Christus Experiment about a team of researchers who capture Jesus and bring him to our time, also available in paperback or Kindle version. A Catholic Lane interview with the author about The Christus Experiment  is at this link. Buy Chesterton’s America here.