Trending Now
You are at:Home»Featured»Book Review: Reclaiming Francis
By Patrice Fagnant-MacArthur on April 30, 2014 Featured, On Books 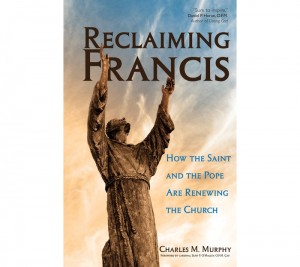 A funny thing happened as Msgr. Charles M. Murphy was putting the finishing touches on a manuscript about St. Francis and how he could be a role model for the new evangelization: Jorge Mario Bergoglio of Argentina was elected to lead the Catholic Church and took the name of Francis to be his own. While the Monsignor needed to update his book, Reclaiming Francis (Ave Maria Press, 2014), he was far from disappointed. He writes, “I prefer to think that this was not really a coincidence but rather a shared vision of how the Church can be renewed and how people today can be helped to find faith once again.”

In explaining why he chose the name, Pope Francis stated, “For me, he is the man of poverty, the man of peace, the man who loves and protects creation.” All three of these aspects are desperately needed in our world. Monsignor Murphy offers a short biography of the man Christ asked to “repair my house for it is falling down.” Francis who embraced Lady Poverty with all he had soon attracted followers to his austere lifestyle. His life offers a reminder to the Church and the world that we need to emphasize human beings rather than the “cult of money and the dictatorship of an economy which is faceless and lacking any human goal.”

While the quote “Preach the Gospel Always. If Necessary, Use Words” is often attributed to St. Francis, there is no doubt that his life embodied that concept. His preaching had power “because he prioritized prayer and embodied witness over preaching.” Both St. Francis and Pope Francis emphasize the cross in their preaching and the need to join Christ by carrying one’s own. However, they also have an innate joy that makes people want to listen to them because they have personally renunciated worldly goods. They both keep prayer, fasting and penance, and charity at the center of their message.

For those of us who want to be an active part of the new evangelization, reaching out to those who have drifted away from the faith, our mission must have three parts. First, we must have the example of personal witness.  We must live the Gospel “in all its novelty and challenge.” Second, we must follow the commandment to love God and neighbor.  Third, we must transform the places in which we live and work. That is where our influence lies.

Monsignor Murphy offers much to think about in Reclaiming Francis. The spirit of St. Francis, always alive and important in the story of the Catholic Church, is gaining renewed focus in light of the name and example of our current pontiff. As he continues to challenge the Church to return to its roots as a Church for the poor, we can change our own lives to regain focus on the example of Christ and what really matters in this sojourn on earth.