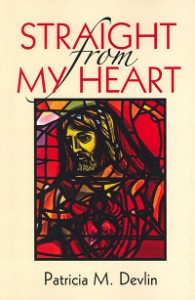 Straight from My Heart is a collection of fifteen short stories and seventy-three poems, approximately chronological, with each story being independent and individually rewarding. Yet all of the pieces collectively draw the reader to something larger.  The stories are engaging, at times fascinating, and always thoughtful.

Patricia Devlin’s stories follow an autobiographical journey through the world of a child with marginal and fading vision, through blind adolescence, and eventually blind adulthood, through family rejection, rape and spousal abuse, the struggles of a blind adult woman raising her children, and eventually the life of a consecrated religious, living with severe pain, whose charism is advocacy of human dignity and the sanctity of life.

Devlin’s is a world of often painful and life threatening mishaps, near misses, betrayals and violent victimization, and timely escapes and rescues, by providential friends and strangers and a beloved devoted guide dog. It is also a discovery of the deeper realm of the human heart, of unexpected sources of cruelty, but also unexpected sources of comfort, love, grace, and the Providence of a loving God. But beneath the pain, while the plots and characters unfold the reader is also drawn into a world of discovery and beauty. At times it is a mystical world, full of the warmth of the sun, the feel of grass, the smell of flowers, and the rain soaked earth, as experienced by an inquisitive and adventurous child with fading vision.

Devlin’s mind is the mind of detective conducting an incisive query, trained in the absence of visual input, to gather and process the nuances of her surroundings, the tones of voice, the unexpected responses, the emotional undertones, the silences, and the touch and feel of things. Her advanced training and experience as a psychologist and family counselor sharpen her interpretations, and her stories are enriched with those of people she has counseled.

The book’s style is soft, the stuff of reverie, the soft moments of the early morning when the mind, unforced by the days events and the emotional maelstrom that follows consciousness, quietly sorts through the past and asks itself, “Now what was that about?” and “Why did I, or he or she do that?” The moments when the mind, disengaged from emotion, can actually sort through things and see things as they really are, and not just as they were felt.

The thrust of the book, however, while revealing and at times painfully honest, never degenerates into rancor. Reactions to hurtful acts rise to indignation, but are then queried and understood, and are always viewed through the eyes of love and the hope of redemption. Those caught in its conundrums are, with one exception that the readers will discover for themselves, seldom simply villains, but people capable of great nobility.

Straight from My Heart is a deeply perceptive study of the things we all experience to a varying degree, but through the unique perception of one whom, by necessity of survival, was forced to examine the closely realities beneath appearance, and the unseen evidence of events surrounding her.

The author, now Sr. Maura Perpetua, a third order publicly consecrated Catholic Hermitess, is a mystic under Catholic spiritual direction.  Devlin has experienced visions of angels, and has previously published the contents of those visions in The Light of Love.  Straight From My Heart, however, is not of visions, but of the human heart, its divinely sanctioned dignity as God’s creature, and its unrelenting search for God and the shared love of others. In its course, the hope of love and redemption is never far from sight.

The sixty-two poems are not an addition, but a continuation of the spirit of the stories, encapsulating and exploring the themes of human dignity and Divine love in a fallen world, unfolded in the stories’ narratives, but as encapsulated in thought and lyric. In them Devlin probes and illuminates the subtle but ultimately momentous difference between mere human reactions and aspirations and those touched by the Divine.  Examples are the nuanced differences between happiness and joy, and remorse and repentance. Like the stories, they are finely crafted and parse fine lines. And more than anything, they are Devlin’s sharing of her love song to God, despite the difficulties of it all. Finally, they pose the problem of our great choice:

I may not choose the path I go unseen,
nor pick the brightest flowers from byways.
But I may choose how I will go and be,
Deciding hope and faith will mark my days

The stories and poems are finely polished and of high quality. In a less cynical time some of them might have been chosen as selections for standard text books of adolescent literature  to help young people, at a difficult time of life, better understand the consequences of petty cruelties. But the subject matter and story content is not age limited. The stories are for all who seek beauty and love in a painful world, and the rose of God and goodness among the thorns. This reviewer has read the book twice, both times with pleasure. I continue to visit the poems. It is a book to be read softly, I would suggest one story at a time. This book is a jewel that has not yet found its audience.  I believe that those who find it will be amply rewarded.