Trending Now
You are at:Home»Featured»Book Review: Suicide of a Superpower: Will America Survive to 2025?
By Fr. C. John McCloskey on April 9, 2012 Featured, Government & Politics, On Books, The Social Order 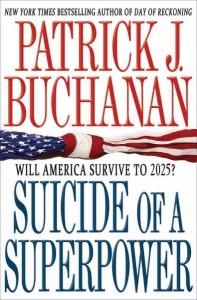 If you are searching for the authoritative Baedeker Guide to the End of the West, search no longer. The book by Patrick J. Buchanan, Suicide of a Superpower: Will America Survive to 2025? makes a devastating case for the end of what we know as the West.

Pat Buchanan is the unacknowledged godfather of the Tea Party Movement and much more. He has written six other best-selling books and has no match as a polemicist, yet he is also an excellent historian who backs up his opinions and conclusions with copious quotations from a wide variety of sources. (Disclosure: I am one of those quoted.)

His timing is impeccable, as America approaches what promises to be a pivotal presidential and congressional election in the midst of one of the worst recessions in U.S. history. Meanwhile, we confront the ongoing threat of radical jihadism, a Middle East that threatens a possible Armageddon scenario within the lifetime of readers of this review, and the demographic, economic, and spiritual decline of Europe, with the emerging superpower of China there to pick up the pieces.

Buchanan himself has been actively involved in political journalism since the late Sixties as ongoing media maven and presidential speechwriter and adviser under presidents Nixon and Reagan; in addition, on two occasions he has himself been a candidate for the presidency.

With the death of Bob Novak in 2009, Buchanan (along with newcomer Jeffrey T. Kuhner of the Washington Times) has little competition as the representative of the traditional conservatism that in recent decades has been superseded by the neoconservatism so evident in the last Bush administration. Buchanan considers this his most important book and the best summary of his own political views, which are of the Old Right Senator Robert Taft and Russell Kirk variety. Although he has not endorsed anyone in this year’s presidential race, his views seem more sympathetic to Texans Perry and Paul than to the other candidates. Recall that Buchanan left the GOP to run for president under the Reform Party, which has in a certain sense morphed into what is now called the Tea Party.

His thesis is clear:

America is disintegrating. The centrifugal forces that are pulling us apart are growing inexorably. What once united us is dissolving, and this is true of Western civilization. Meanwhile the state is failing in its fundamental duties. It is no longer able to defend our borders, balance our budgets, or win our wars.

Simultaneously, the Middle East in particular has never been less stable, since the disappearance in recent months of several long-entrenched leaders has left a vacuum more likely to be filled by fundamentalist Islamic parties than by Western-style democracy. And then there is China… Need I say more?

Suicide of a Superpower details in 11 chapters a wide variety of societal decline. After his opening chapter, Buchanan examines what he as a serious Christian thinks lies at the root of the matter: that the U.S. is no longer a Christian country. Even President Obama agrees with him on that. And what may be worse than the continuing decline of religious practice in America is the loss of a common morality drawn from natural law and Divine Revelation. As Buchanan notes after quoting the British historian of religious culture Christopher Dawson, “If Dawson is correct, the drive to de-Christianize America, to purge Christianity from the Public Square, public schools and public life, will prove culturally and socially suicidal for the country.”

Buchanan is well known as a Catholic who cherishes happy memories of Pre-Vatican II Catholicism, and he recounts with obvious pain the sad decline of Catholic religious practice, cultural and political influence, and adherence to the faith, bemoaning the spectacle ranging from “the former Speaker of the House to the Vice President of Catholic politicians who openly support abortion on demand.”

Another chapter chronicles “Demographic Winter.” “People of European descent are not only in relative but a real decline. They are aging, dying, disappearing. This is the existential crisis of the West.”

And also the existential crisis of the Jewish nation, which is most threatened not by any Iranian weapon of mass destruction but by its own low reproductive rates. By mid-century, Palestinians west of the Jordan River will outnumber Jews two to one; adding Palestinians in Jordan raises the ratio to three to one.

Other chapters examine mass immigration from Latin America and predict what Buchanan believes is America’s inevitable withdrawal of its military from hundreds of military bases through the world, due in part to our declining economy. Suicide of a Superpower is the work of a man who sincerely loves his country and has served it well. Nonetheless he writes:

America is entering a time of trouble. The clashes of culture and creed are intensifying. …And the Crises that afflict us–culture wars, race division, record deficits, unpayable debt, waves of immigration, legal and illegal, of peoples never before assimilated, gridlock in the capital and possible defeat in war–may prove too much for our democracy to cope with. They surely will, if we do not act now.

Well, we can’t say we were not warned. It would certainly be helpful if candidates for the presidency and other elective offices in the U.S. in 2012 read this book and were asked in the debates about how to stave off the ongoing suicide. Buchanan does not assert that the country will not survive, but rather argues that it will no longer be the country that the Founders envisioned. If, as is likely, the United States does not alter its current trajectory, I can only hope that the book will survive to be read centuries from now by some future Gibbon as a prophetic cri de coeur unhappily ignored in its time.

Perhaps that writer will ask how a republic blessed with a continent of great natural resources, a Constitution unique in human history, and a populace blessed with the Christian faith could have committed suicide. However, Buchanan reminds us: “Demography is Destiny.” In the United States since 1973 more than 50 million future citizens have been aborted, the contraceptive mentality has brought the middle-class population below replacement level for the first time in our history, the top money-making entertainment industry is Internet pornography, and the easing of divorce laws has en-couraged adultery and split up families with devastating impact on millions of children. Now, in perhaps the final step, traditional marriage between one man and one woman is gradually becoming merely one more option. The number one health problem in our country in the midst of the worst economic downturn since the Depression is not hunger, but obesity. The real question is whether America is worth saving. One thing for sure, it is no longer “Exceptional.” Consider what is left of Europe for a sobering view of our future. The only hope for our country is a moral and spiritual revival. Are we up for the challenge? The next decade should give us the answer.

That’s why ultimately we should look in the mirror for the cause of our decline. In the immortal words of Pogo: “We have met the enemy and he is us.”

This article first appeared in The American Spectator, March 2012.