Trending Now
You are at:Home»Columnists»Book Review: Suicide of a Superpower
By Russell Shaw on May 4, 2012 Columnists, Featured, Government & Politics, International Issues, Law & Justice, On Books, The Social Order 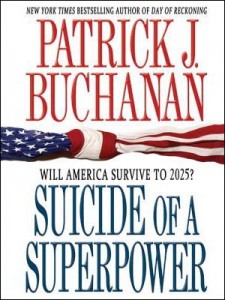 I was nearing the close of Pat Buchanan’s new book Suicide of a Superpower (St. Martin’s Press) when I read that MSNBC had fired him as a political commentator for expressing views offensive to political correctness as practiced at that left-leaning network. (“Left-leaning” as applied to MSNBC comes from the Los Angeles Times, which is well situated to know a left-leaning news operation when it sees one.)

The conservative Buchanan cited Suicide of a Superpower as the occasion for his heave-ho by MSNBC. If this book is actually did do him in, I can’t say I’m entirely surprised. It’s hard to imagine anybody agreeing with everything it says, and many will come away from it hopping mad. But matter for firing? Only in a setting where thinking unpopular thoughts is not allowed.

Buchanan is blunt on topics where others tread lightly or not at all. But bluntness is the only honest approach to his central theme: America’s ideologically-driven craze for diversity has gotten out of hand and is well on its way to doing us in. (In a book I haven’t read, Coming Apart, Charles Murray of the American Enterprise Institute makes a similar argument but, unlike Buchanan, deliberately omits race and immigration from his analysis.)

“Racially, culturally, ethnically, politically, America is disintegrating,” Buchanan writes. Ever since the cultural revolution of the 1960s, Americans have been losing their shared sense of identity as a nation. “Out of one we have become many,” he says.

In tackling tough issues like race, immigration, and the wisdom of continuing international 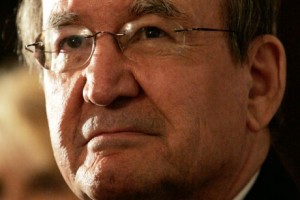 commitments left over from cold war days, Suicide of a Superpower says plenty to raise hackles. Even more annoying, the author bolsters what he says with facts and coherent arguments. That includes making the case that unchecked immigration presents a grave national problem whose ducking by Congress and the White House reflects the moral and intellectual bankruptcy of political Washington.

But has he got the story straight about Hispanics? Recently-arrived Latinos may be at the same early stage of assimilation that groups like the Irish, the Jews, and the Italians occupied a long time ago. Entry into an alien culture is bound to be a bumpy road—for the Spanish-speakers as it was for them. Give the Latinos time. The results could turn out more happily than Buchanan imagines.

The author, a Catholic, devotes a chapter to the Church, saying no institution in America has been more “ravaged” than it by cultural changes of the last half-century. Now, he says, Catholicism in the United States must “necessarily [be]an adversary culture” in order to survive. The assimilation of American Catholics has already gone disastrously far. Much farther, and American Catholicism will be finished as a viable cultural force.

That, however, underlines another problem—in the real world and also in this book.

Buchanan seeks a solution to disruptive diversity in the seamless assimilation of diverse groups into a unitary American culture. In other words: bring back the melting pot. Yet, as he’s well aware, American secular culture in its contemporary manifestation is far from being the basically healthy thing that it was back in melting pot days. On the contrary,  it’s degraded and destructive, as a few hours spent watching television or reading The New York Times should persuade any sensible person.

What to do? Diversity or assimilation? Or some yet-to-be discovered third way that combines elements of counter-culturalism and new evangelization? That’s worth another book. Maybe, without MSNBC on his hands, Buchanan will have time to write it.