Trending Now
You are at:Home»Featured»Book Review: The Adventures of Beer Man
By Michelle Reitemeyer on August 29, 2011 Featured, On Books 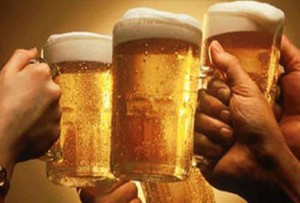 It’s not very PC to consider yourself a drinker.  Alcohol has a bad rap, and its consumption is best kept to a minimum in public and polite society.  Think I’m joking?  Not too long ago, at a military ball, an official announcement was made that anyone who had had anything at all to drink had better not be driving.  In part, perhaps, it was done to legally cover their rear ends in case someone was irresponsible and reckless.  But honestly, I get the sense that many people really mean it.  It didn’t matter that dinner was served and possibly hours would pass from the time one might imbibe and one might then drive.  The implied rule is that your BAC had better be ZERO if you intend to drive.

I’m certainly not in favor of drunk driving, and I think we need to be cautious and responsible.  But Bill and I went to dinner last night and each of us nursed a drink – he had a Bass Ale and I had a Strongbow Cider – and I didn’t even consider that he wasn’t fit to drive.  I certainly felt fine myself.  But more often than not, if out with others, I drink water and he hands me the keys.

In The Adventures of Beer Man, Eric Scheske tackles this neo-Prohibitionist mentality with humor and logic.  Roy Tate seems like a nice, mild-mannered fellow.  Secretly, though, he battles the forces of Puritanism, Debauchery and Rastafarianism disguised as Beer Man, who hands out free beers at social events that need a little kick in the pants.  Beer Man doesn’t want everyone to get drunk; he merely wants everyone to have a good time.

This is not a message in favor of hedonism, a self-gratifying indulgence.  Rather, Beer Man shows that the art of drinking leads to good for others as well.  Drinking a few beers will make you more charitable, less likely to quarrel with your neighbor, more likely to sit a spell and have a pleasant conversation, and more likely to be friendly with strangers you would otherwise ignore.  In other words, proper drinking makes you more sociable and being more sociable means being a better neighbor and being a better neighbor means being more the way God intended us to be.  Drinking makes us virtuous.

It’s a message that won’t sit comfortably with the prudes among us.

I really enjoyed this book and found it to be easy, fun reading.  It is self-published via Kindle which means it is not available to sit on your shelf.  I downloaded it to read on my iTouch, which was not as bad as I thought it would be.  I did have to flip pages every 3 seconds or so, but I got used to it.  I also downloaded the Kindle software for PCs to my husband’s laptop so he can read it, and there is definitely more of a page to view through that medium.  It’s also available through Smashwords, although I’m completely unfamiliar with this site.  The book is only $0.99, and I did pay for it, so I am not making even that money in exchange for this review.