Trending Now
You are at:Home»Featured»Book Review: The Closing of the Muslim Mind
By Raymond Ibrahim on October 28, 2011 Featured, On Books 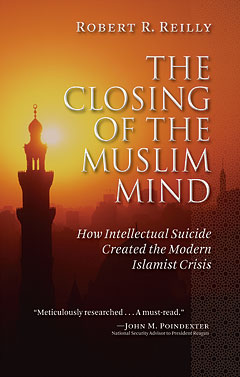 Last week, “Saudi Arabia’s religious police arrested an Indonesian housemaid for casting a magic spell on a local family and ‘turning its life upside down.'” The maid “confessed” to using sorcery, and “commission experts took the magic items to their office and managed to dismantle and stop the spell.”

Far from being absurd aberrations to be dismissed, such accounts, which are becoming better known thanks to the Internet, are stark reminders of the incompatibility between the Western and Muslim worldviews, or, more to the point, the difficulty Western peoples have transcending their own paradigms and understanding the Muslim worldview in its own right—above and beyond the issue of sorcery.

In his book, The Closing of the Muslim Mind: How Intellectual Suicide Created the Modern Islamist Crisis, Robert Reilly, a senior fellow at the American Foreign Policy Council, helps explain the Muslim worldview by thoroughly documenting the historic and doctrinal roots behind it; by refreshingly bypassing the overly dramatized question of “what went wrong,” he explains the more pressing “why it went wrong.”

The book is a reminder of the importance of epistemology: before understanding Muslim acts, one must understand the Muslim mind that initiates them. We discover that Shakespeare’s dictum “Nothing either good or bad, but thinking makes it so,” in Islam becomes “nothing good or bad but Allah says so.”

The author sheds light on the struggles of the different schools of Islam, showing how by the 10th century, the fatalistic, deterministic schools triumphed, delivering the death blow, not only to the notion of free will, but natural law as well: “a theological deformation … produced a dysfunctional culture.” From here one can understand the full impact of the popular assertion “the doors of ijtihad [intellectualizing]closed in the 10th century.”

Reilly chronicles how the giants of Muslim philosophy, such as Ghazali and Ashari, concluded that knowledge was unknowable, that moral truths can only be ascertained through revelation. Accordingly, all knowledge—the very bounds of reality—came to be limited to the words of the Quran and its pronouncer, Islam’s prophet Muhammad.

Equivocations, such as the following by Ashari, become commonplace: “Lying is evil only because Allah has declared it to be evil…. And if he declared it to be good it would be good; and if he commanded it, no one could gainsay him.” Of course and as Ashari knew, the Islamic deity and his prophet are on record permitting and even encouraging Muslims to deceive.

Similarly, the spirit of inquiry perishes: “the only thing worth knowing is whether a specific action is, according to Shari ‘a: obligatory, recommended, permitted, discouraged, or forbidden. The rest is irrelevant.” It is precisely for this reason that in Islam, the law—what is right or wrong, how one should live—trumps “theology,” the latter designated as kalam, that is, mere “words.” This is also why in the last millennium Spain alone has produced more books than the Arab world in its entirety.

Likewise in the realm of science: Reilly cites a Pakistani physicist—not an uneducated, impoverished “radical”—saying it is “not Islamic” to believe that combining hydrogen and water makes water; rather, Muslims are “supposed to say that when you bring hydrogen and oxygen together then by the will of Allah [which need not always be consistent]water was created.”

The Closing of the Muslim Mind explains the singularity of Muslim epistemology and its antithesis to Western sensibilities: not only does it explain why a maid was arrested and charged with sorcery, or why bewitched animals are dreaded; it also explains why adult “breastfeeding” and habitual lying pose no moral problems; explains why top Muslim clerics insist the world is flat and ingesting the feces and urine of Muhammad is salutary; explains why jihadists believe their terror is pious and a libidinous paradise awaits them.

All these “alternate” ways of thinking make sense when one accepts that, in the purely Muslim mind, intuitive reasoning, the human conscience, and even common sense take a backseat to the literal words of Allah and his prophet, seen as the founts of all truth and reality—or, inevitably from a non-Muslim perspective, the words of a deluded or deceiving 7th century Arab.