Trending Now
You are at:Home»Learn & Live the Faith»Catechesis»Book Review: The Power of Daily Mass
By Patrice Fagnant-MacArthur on February 6, 2015 Catechesis, Featured, On Books 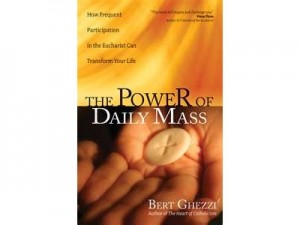 In The Power of Daily Mass: How Frequent Participation in the Eucharist Can Transform Your Life (Ave Maria Press, 2015), popular Catholic author and speaker Bert Ghezzi shares how attending daily Mass has enriched his life. He also offers quotes from other daily communicants on the value this practice has for them. He reflects on the liturgical year, including not only the major seasons of Advent, Lent, and Ordinary Time, but also the individual feast days of the saints which offer the opportunity to reflect on their lives, their sufferings and their example.

The Liturgy of the Word invites us to hear Scripture each day. “God wants to communicate with us daily through the readings and homily. We expect that he has a personal message for us and listen carefully.” Ghezzi even suggests bringing a notebook to Mass in order to jot downs any thoughts that come to us while listening to the readings. He also discusses the power of the prayers of intercession.

The Liturgy of the Eucharist offers us spiritual fortification for our lives. “Daily Mass both revives our spiritual strength and also galvanizes our will to resist temptation to serious wrongdoing. Venial sins erode our capacity to love God and others, bur reception of the Eucharist restores it.” Of course, if one has a mortal sin on one’s soul, one should receive the Sacrament of Reconciliation before receiving the Eucharist.

Ghezzi also reflects on the community that forms among the individuals who attend Mass every day in the same parish. Before and after Mass often holds a social component. They notice who is missing on a given day and they carry each other’s prayer intentions to the Lord. These individuals leave Mass equipped for the day’s service, ready to do the Lord’s work in the world. Ghezzi does understand that attending daily Mass is not an option for everyone, but encourages the faithful to try to attend at least one or two extra times a week. The spiritual benefit is great.

An appendix of prayers for before and after Mass as well as the General Roman Calendar are included. “The Power of Daily Mass” is a brief book and most likely would not be of use to someone already devoted to the Mass and aware of its benefits, but it does provide a great overview of the spiritual rewards of attending Mass on a regular basis.