Trending Now
You are at:Home»Learn & Live the Faith»Apologetics»Book Review: The Romance of Religion by Dwight Longenecker
By Mary Kochan on March 12, 2014 Apologetics, Featured, MyChurchParish.com, On Books 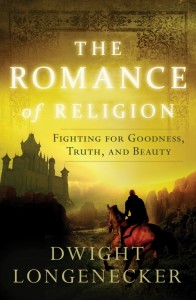 Ever “evolving”, “progressing” — or so he believes — the modern intellectual mentality slithers out of the sea of mystery, clambering from arrogant skepticism to jaded cynicism, until exhausted of wit and verve, it reaches the hard shore of “reason”.  And there on the flat landscape it flutters, just out of reach of the lapping surf, expecting some transmogrification by mere will: to sprout legs or wings or maybe both. Deliriously unconscious of its impending demise, it satisfies itself with the observation that at last it can see clearly, know entirely, and explain fully, this entire pebbled expanse. Here there are no depths, no shadows gliding beneath, no sparkling surface to break in an exhilarated leap. And then along comes a Christian, like CS Lewis, or better yet, a Catholic, like Chesterton, wading the breakers, spotting the fish out of water and throwing it back into the depths of the real.

Novelists, playwrights, artists, poets, these also rescue. And the good philosophers and good philosophy. And this book:  The Romance of Religion: Fighting for Goodness, Truth, and Beauty.

The Romance of Religion is an absolute delight to read. As popular and prolific as this author is, it was strange that this is the first book I have read by him. Just a few pages into it, I looked up and exclaimed to my husband, “Wow, can this guy ever write!”  “This guy” more properly, is Father Dwight Longenecker, convert to the Catholic faith from Evangelicalism via the Anglican Church where he was ordained as a priest.  He now serves as parish priest of Our Lady of the Rosary parish in Greenville, South Carolina.

The Romance of Religion might best be described as an extended, thoughtful, elegantly-inscribed invitation.

Its purpose is to let you know the meaning of that mysterious mark upon the door of your heart: You are called away most unexpectedly and yet, most naturally, upon a great adventure. Unexpectedly, because adventures always surprise. Naturally, because you were made for this and nothing better conforms to your nature than to leave what is so safe that you have ceased to see and feel it and go where every sense tingles in glee… or dread.

Pope Benedict reminded us, “Everything is created so that this story can exist: the encounter between God and his creature.”

Everything is so that this story can exist. As Father Longenecker puts it: “If the modern physicists and ancient sages are right the real world is not the one you see but the one you don’t see, and the way to get real is to open your eyes and see what is invisible…. It is said that the cynic sees through everything, but this is exactly what the cynic does not do. He does not see through a thing enough. That is to say, he has not seen through a thing to see what is beyond. The cynic is like a man who looks into a window and sees only glass (82).”

No, we are not trapped in the meaninglessness of Hume’s one damn thing after another; our lives really do have a narrative quality and the narratives of our lives intertwine and are embedded in other larger narratives and ultimately in this story, the true myth, The Romance of Religion. This is why Father Longenecker is so keen on stories that show us the way back into the depths: “The true stories were constant pointers to the real possibility that the unseen world could intersect of this world and that powerful forces were constantly at play influencing what seemed to be ordinary history. There was always something going on behind the scenes. There was always another level of meaning, a hidden truth, and a veiled presence (106)”.

If this is true, and it is, it is scary stuff. It means that to get real is to get into deep water where all manner of things, some quite unpleasant, might happen to you. But Father Longenecker reminds us that Jesus invited his friends to “Cast out into the deep.” We hesitate because: “This is not a task for cowards, and most of us are cowards. Furthermore we know we are cowards and we know that we must face the dark (108).” We must be heroes. But how, how? How when there are hard things?  How when there are dark things? How when the darkest, hardest thing of all lurks?  Identifying with storybook heroes may show me what heroism looks like and how it acts, but I need more than a storybook hero to show me the way through my own death. For that I need a hero who has gone, not merely into death, but through it, beyond it, above it. One who has risen from the depths to break the surface of mortality and who can lead me into eternal love and life. I need to follow that hero. More, I need to fall in love with Him in the great narrative of my life that is The Romance of Religion.

You will love this book.