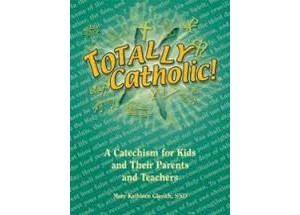 Our children are often the impetus that draws us closer to God.  In between diapers, sleepless nights and planning for college, parents contemplate something more.

For many poorly catechized Catholics, however, the “something more” is a bit intimidating. Our children have souls that need more than the ABC’s and a good college fund, but where do we begin and how do we proceed?

I know the feeling so well. That is why I am enthused about Totally Catholic: A Catechism for Kids and Their Parents and Their Teachers.  Really, it is for everyone. Author Sr. Mary Kathleen Glavich teaches the basics in a way that is both simple and deep, while adults will learn many of the things that they missed but were afraid to ask.  There is so much information and fun facts that everyone will learn as they go.

In a letter to children at the front of the book, Glavich tells them that she has a new computer that came with a manual but she hasn’t read it. “Wouldn’t it be silly if I never read the manual?” she asks. “For the most part, my computer would be wasted.”

In turn, she explains that we have a gift far greater than a computer—our Catholic faith.

The book seeks to explain what it means to be a Catholic by using the catechism, which the Church wrote as a guide. “The word catechism means ‘to echo.’ A catechism is a book that hands on the truths of the faith that have been echoed down the centuries from Jesus, through generations of people, to you.”

Glavich uses the Catholic catechism and translates its Gospel message for children in a language they can understand.  The writing is highly engaging with tidbits of information, blurbs on VIP’s (Very Important Personas a.k.a. the saints) stories and examples to engage today’s young minds.

Lessons on the usual Catholic content include such things as: Why Did God Create?  Why Aren’t We in Paradise? How Were Jesus’s Miracles Signs of the Kingdom? and Who Is the Holy Spirit?  Teachings on life responses that reflect Catholic morals include: What is Involved in Honesty? What Is Our Vocation? and Why Did God Make Us Male and Female?

For instance, we learn about the Eighth Commandment in a way that reaches into life experiences in the chapter, “Why is Truth Important?”

After relating the Boy Who Cried Wolf story Glavich writes, “Society only runs well if we can trust one another. This trust is like glue that holds us together….Lies cause confusion and trouble. This is the lead-in for understanding why God made it a Commandment not to lie. In addition to lessons, kids are challenged. “When to tell the truth is sometimes hard to know. For example, should I tell the truth if my friend will get into trouble, if it’s a family secret, or if someone’s feelings will be hurt?”

She adds a powerful BTW (by the way) for kids to consider. “Gossip that is spread through texting or the internet can be even more hurtful than unkind words spoken to another because it can be seen by many people.”

Why is Mary Special?

Here is another example from the chapter on Mary. We are told that Mary is one of the most popular names in the world and Mary of Nazareth is probably the most famous woman. “Out of all the women who ever lived or will live, God chose her to be the mother of his Son, Jesus. Mary is also the mother of Christ’s Mystical Body, the mother of the Church and our heavenly mother.”

Children learn that the name “Immaculate Conception” referring to Mary, comes from the fact that Mary was preserved from original sin from the beginning.  Her virgin birth—becoming pregnant with Jesus by the power of God, and Mary’s assumption into heaven—going to heaven with both body and soul, is also explained.

Under the “BTW” heading it is stated:  “Mary is called the New Eve because new life came to the human race through her”.

Since Protestants and even Catholics often misunderstand or ignore the traditional devotion to Mary, Glavich clears things up. Devotion—not worship—of Mary is explained and reasons are provided why Mary is our intercessor. “After Jesus, the blessed Virgin Mary is the holiest person who ever lived.” Glavich touches on some key facts and stories, and retells the miracle at Cana, where Mary said to the servants, “Jesus changed six jars of water into excellent wine. . . .When we need help, we can turn to Mary and she will pray for us.”

Under the “Brainstorm” section, Glavich asks, “What crosses did Mary have in her life that made her Queen of Martyrs? Why do you think Mary is called Mother of Divine Grace? Name three ways you could honor Mary.”

Our ancient Catholic teachings remain the same, but Glavich has a way of presenting them to today’s generation without watering them down. I am grateful that I was asked to review Totally Catholic because I am using it with my children this year.  It is a way of spending time with God and with my kids at the same time.