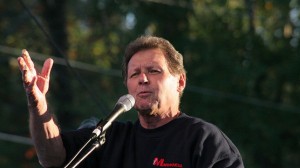 The National Catholic Reporter (NCR) reports the former Reverend Roy Bourgeois has been formally notified of his dismissal from his religious community and the priesthood.

Bourgeois is a vocal proponent of women being ordained priests.  In 2008, he participated in the simulation of the Sacrament of Holy Orders involving a woman.  Shortly thereafter, says the NCR article, the Congregation for the Doctrine of the Faith (CDF) ordered Bourgeois to cease and desist, notifying him of his having incurred excommunication “latae sententiae” (automatic).

Bourgeois did not obey and in October, 2012, the Holy See dismissed him from his religious community (Maryknolls) and the priesthood.

Bourgeois was notified of these actions in October, 2012, but only received the formal letter written in Latin earlier this month from his (former) religious superiors.  The death of Bourgeois’ father appears to have had a role in the delay, the NCR article indicates.  Regardless, NCR portrays an upset Roy Bourgeois who claims the letter does not tell him with what he has been charged.

Given the public nature of this case, the repeated warnings and clear statements on the precise problem, one can only wonder about Bourgeois’ above exasperation.  The October, 2012 letter was not about bringing charges to Bourgeois.  It was about notifying him of the penalty incurred for not obeying previous admonitions wherein the problem was explicitly stated.

The fact that women cannot be priests is non-reformable Catholic doctrine.

Pope John Paul II addressed the question of “women priests” in 1994 with his Apostolic Letter Ordinatio Sacerdotalis.  In paragraph 4, John Paul taught, “Wherefore, in order that all doubt may be removed regarding a matter of great importance, a matter which pertains to the Church’s divine constitution itself, in virtue of my ministry of confirming the brethren, I declare that the Church has no authority whatsoever to confer priestly ordination on women and that this judgment is to be definitively held by all the Church’s faithful.”

In 1995, Cardinal Ratzinger, then Prefect of the CDF responded to a dubium (“doubt”) to said Congregation on the character of Ordinatio Sacerdotalis’ teaching.  Was this teaching considered part of the Deposit of Faith?

Cardinal Ratzinger responded affirmatively, saying, “This teaching requires definitive assent, since, founded on the written Word of God, and from the beginning constantly preserved and applied in the Tradition of the Church, it has been set forth infallibly by the ordinary and universal Magisterium.”

Following upon the above response from the Congregation was a follow-up document.  This document clearly spells out further the nature of Ordinatio Sacerdotalis and the Congregation’s response.

Once again, in 2007, the CDF reiterated the above teaching in a General Decree against the attempted ordination of women.  This Decree states anyone who either tries to ordain or a woman who attempts to receive ordination receives excommunication latae sententiae reserved to the Apostolic See.

Three years later in 2010, the CDF issued Normae de gravioribus delictis.  Article 5 of this document essentially reiterates the General Decree of 2007.  It classifies the act of simulated priestly ordination as being a “grave dereliction” reserved to the Apostolic See.

Given the above series of documents, the teaching of the Catholic Church is clear: women cannot be ordained priests.  This is a matter of the Deposit of Faith to which the faithful must assent.  It is not a matter of “justice” or “equality” but one of Divine and Catholic Faith.

For his part, Bourgeois plans to disregard the letter from the Holy See and continue speaking against Christ and His Church concerning women and priestly ordination.  NCR reports Bourgeois “said Wednesday he would continue to speak in favor of women’s ordination….”

Perhaps the new and less contumacious life the Holy See has ordered Bourgeois to live will cause him to recant his views.