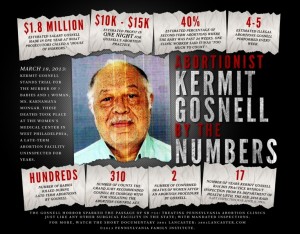 Dr. Kermit Gosnell — a “barbaric” “monster” — is on trial in Philadelphia for murdering one woman and seven babies.

The major TV networks and big-city newspapers want America to know nothing about it, so they are ignoring the story: a deliberate conspiracy of silence, demonstrating their intellectual and moral depravity.

Infant beheadings. Severed baby feet in jars. A child screaming after it was delivered alive during an abortion procedure. Haven’t heard about these sickening accusations?

It’s not your fault. Since the murder trial of Pennsylvania abortion doctor Kermit Gosnell began March 18, there has been precious little coverage of the case that should be on every news show and front page. The revolting revelations of Gosnell’s former staff, who have been testifying to what they witnessed and did during late-term abortions, should shock anyone with a heart.

Gosnell was arrested more than two years ago:

A doctor whose abortion clinic was a filthy, foul-smelling “house of horrors” that was overlooked by regulators for years was charged Wednesday [Jan. 19, 2011] with murder, accused of delivering seven babies alive and then using scissors to kill them.

Hundreds of other babies likely died in the squalid clinic that Dr. Kermit Gosnell ran from 1979 to 2010, Philadelphia District Attorney Seth Williams said at a news conference.

“My comprehension of the English language can’t adequately describe the barbaric nature of Dr. Gosnell,” he added.

At the time, Philadelphia’s mayor was quoted:

Mayor Michael Nutter was frank when he spoke about the allegations against Dr. Kermit Gosnell.

“I think it’s quite clear that, if these allegations are true, we’ve had a monster living in our midst,” Nutter said Friday [Jan. 21, 2011]. 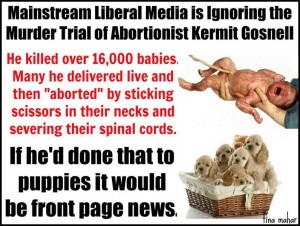 Let me state the obvious. This should be front page news. When Rush Limbaugh attacked Sandra Fluke, there was non-stop media hysteria. The venerable NBC Nightly News’ Brian Williams intoned, “A firestorm of outrage from women after a crude tirade from Rush Limbaugh,” as he teased a segment on the brouhaha. Yet, accusations of babies having their heads severed — a major human rights story if there ever was one — doesn’t make the cut.

You don’t have to oppose abortion rights to find late-term abortion abhorrent or to find the Gosnell trial eminently newsworthy. This is not about being “pro-choice” or “pro-life.” It’s about basic human rights.

Pennsylvania Family Institute has a timeline and trial updates — which you’ll have trouble finding anywhere else.

A “tweetfest” is being called for tomorrow, Friday, April 12th. Call out media using the hashtag “#gosnell”.

Not on Twitter? Call or email media and demand they cover the trial of Philadelphia’s “barbaric” “monster” doctor.