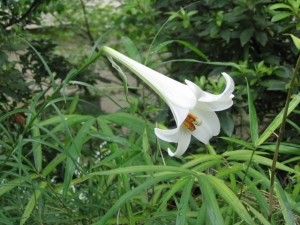 Not long ago the media reported on a Pennsylvania abortionist who had been arrested for killing newborns. Pictures of his victims were included in a grand jury report. It was vile. Photos of dead babies killed as they were born, their necks with gaping wounds where the abortionist had slit their spinal cords. Despicable and depraved, but then no less so than the in the most common kind of abortion procedure where the child is beheaded and dismembered, and the body parts suctioned into a medical waste container.

Then no sooner had we heard the report of the killings in Pennsylvania, than the media reported on yet more corruption at Planned Parenthood. Employees and even PP office managers at various PP offices were filmed by the group Live Action in a pro-life undercover operation. They were caught providing a man with information on how to obtain abortions and gynecological exams for underage girls whom he openly represented to be working for him as prostitutes, and who were in the United States illegally.

Planned Parenthood claimed that the incidents were isolated, but Live Action’s reports were clearly not about some small aberration at PP. When you are in the blood trade of abortion, corruption is at the core.

But that is the way with evil. It is always hiding or distorting the truth. It always portrays itself as good, but seeks to destroy the good. Babies are not killed by abortion. The pregnancy is “terminated,” and the “products of conception” are evacuated and disposed of in an environmentally sensitive manner. Regardless of what you may actually see or think there is no human being, there is no pain, and there is no death.

Standing in front of abortuaries month after month watching hundreds of mothers go in with their children, and in a few hours come out alone leaving behind a dead, dismembered child in a medical waste container, it is impossible not to ask: Why must what is good and innocent be destroyed? Why must we live with so much evil? This, of course, is a great mystery. But on one level there is a simple answer. Man has free will, and man chooses to do evil.

Moreover, ours is a fallen world, and Satan wants to exploit it, one soul at a time. Certainly, killing the newly born and the soon to be born as a commercial enterprise, and the selling of little girls (and boys) as sexual objects for money are examples of sin in a fallen world, and sure signs of the presence of the Dark One among us.

It is depressing and hard not to become overwhelmed, even angry, at the constant carnage that happens virtually before our eyes. Our efforts seem so futile. However, we, especially those who work directly in pro-life apostolates, must have a hopeful, salvific vision. The sadness and sense of futility arising from the bloody depravity of the commercial killing of babies and the selling of children into sexual bondage is the devil’s bad medicine. We are targeted to question our faith, and to lose hope.

In St. Mathew’s Gospel Jesus tells the parable of the weeds and the wheat. As you may recall, after the master’s servants sowed wheat in his field, an intruder slipped in at night and sowed weeds in the same field. The deed is discovered when the weeds begin sprouting with the wheat. The servants are upset, and want to pull the weeds up, but the master says that doing that would uproot the wheat as well. So, he tells them to leave the weeds until harvest, when they will separate one from the other, and throw the weeds in the fire.

Most of us likely understand this parable as an admonition that we must put up with and defend against sin and evil until we are finally freed from this fallen world. A heavenly call to fight the good fight. True, but there another message here, and the life of Jesus teaches us about that message.

There is that peculiar part of the Easter Vigil Liturgy when we sing the Exultet: “O felix culpa quae talem et tantum meruit habere redemptorem,” “O happy fault that merited such and so great a Redeemer.”

So it is not only that we are to carry on the struggle until the fight is over and the bell rings. There is an affirmative element here. As St. Thomas Aquinas taught, as did St. Augustine before him, God allows evil to happen so that good may spring from it. For our part, we are made in the image of God, and we are called to become like Him. If the Redeemer brings great good from evil, as He did and does, then we must try to imitate Him in our lives and certainly in pro-life work.

We have no idea what effect we have on those coming and going at abortuaries. The mothers, the fathers, their friends or parents coming to support them, and even the abortuary workers. Even if a woman persists and has an abortion, she may repent later at the horror of what she did, maybe because she saw someone praying for her in front of the abortuary, someone who offered her forgiving consolation. In reaction to the killing of her child, a woman may become a better mother to the children whom she did not abort, or may talk someone else out of having an abortion. An abortuary employee going to her job may be reminded by the gentle but firm presence of pro-life witnesses that she is cooperating with evil, and quietly quit her job. We cannot know the marvelous healing of power of God’s Grace, and the effects of our participation with that Grace.

Those who labor and pray for the end of abortion and all manner of infanticide, as well as the destruction of our children in sex trafficking and pornography, should not only “put on the full armor of God” and fight this monstrous depravity in all of its destructive evil, but at the same time believe and understand that from such evil great good and holiness will come. When the Day of Judgment comes the “weeds” will indeed meet their Judge to receive His judgment. However, amongst those weeds here on earth at abortuaries operated by Planned Parenthood and by killers such as the Pennsylvania abortionist, in ways we usually cannot know or understand, or may not even live to see, there is good which will come to fruition and be revealed. Like the blood of the martyrs, the blood of the innocent is the fertile soil of goodness and truth. If the Resurrection means anything it means that!