Trending Now
You are at:Home»Featured»Bringing Souls to Jesus through the Four Men Prayer Groups
By Dr. Brian Kiczek on February 16, 2012 Featured, Live in Christ, Men 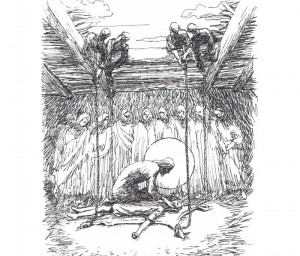 I would like to introduce you to an exciting new men’s prayer group based on the Gospel of Mark’s story of Four Men who brought their paralyzed friend to Jesus for healing.  Through their faith they obtained their friends’ healing and the even greater miracle of the forgiveness of his sins.  Members of this prayer group seek to continue this by bringing souls to Jesus through prayer and sacrifice.  There are no meetings to attend so they are able to fit the five minute a day prayers and sacrifices easily into the very active life of most men nowadays.  It is only a men’s prayer group but women can help us tremendously by introducing this group to their husbands, brothers, fathers, sons, and friends and in doing so they will also be bringing souls to Jesus.

The group was formed through the inspiration of the Biblical story of the Four Men as well as the Life of Ven. Anne De.Guigne. Ven. Anne was a young child who would offer prayers and sacrifices for a sinner until a conversion was obtained for them. We seek to continue that by praying and offering sacrifices until the grace of healing and conversion is obtained and by the grace of God it is hoped that no spiritual paralytic will ever be lost to the fire.

The Four Men prayer groups will lead you closer to Christ and to each other.

The story of the four men prayer groups begins in the Gospel of Mark and is one of the greatest stories of friendship ever. These four men carried their paralyzed friend to Jesus to be healed and they let no obstacle get in their way. They did not let the crowds, the roof, or appearances stop them, but filled with faith in Jesus they lowered their friend down to be healed. Not only was their friend healed, but Jesus seeing the Four Men’s faith also forgave the paralytic his sins which is a far greater miracle.

You now have the opportunity to continue this great story of friendship by forming your own Four Men prayer group or joining one. You bring spiritual paralytics(sinners) to Our Lord Jesus for their healing, conversion, and salvation. These spiritual paralytics need your faith, prayers, and sacrifices to be saved. As Our Lady, the Virgin Mary told the Fatima children, “Pray, Pray very much, and make sacrifices for sinners; for many souls go to hell, because there are none to sacrifice themselves and to pray for them.”(July 13, 1917) The Four Men prayer groups will do something about that and by the grace of God no spiritual paralytic will ever be lost.

Jesus said, “If two of you shall consent upon earth, concerning any thing whatsoever they shall ask, it shall be done to them by my Father who is in heaven.” (Matthew 18:19) Your group will not only be two but four who consent to the healing, conversion, and salvation of your spiritual paralytics.   “There is nothing more holy in this world than to work for the good of souls, for whose salvation Jesus Christ poured out the last drops of His Blood.” (St. John Bosco).  Jesus died for these souls and thus He is willing to pay us any price to help Him save them.  The price He first pays is to ensure our own salvation.   “Whoever brings back a sinner will save his soul from death and will cover a multitude of sins.” (James 5:20).  Our Lord Jesus told Saint Faustina, “I thirst. I thirst for the salvation of souls. Help me, my daughter, to save souls.” (Diary of St. Faustina:1032) Rise up today and join the Four Men prayer groups to bring spiritual paralytics (sinners) to Our Lord and Savior Jesus Christ.

The principles behind the “Four Men” prayer group is friendship, teamwork, prayer, sacrifice and ultimately salvation for yourselves and those you love. The basic unit of the greatest fighting force known to man, “The United States Marines” is four men. Your Four Men Prayer Group will be an elite fighting force (through prayer and sacrifice) in the Army of God. You will become one of “God’s Marines” and our motto is to “Never Leave a Soul Behind.”  Know that your prayers for the conversion of your spiritual paralytics is the most pleasing prayer to God as written in Saint Faustina’s diary, “The prayer most pleasing to Me is prayer for the conversion of sinners. Know my daughter, that this prayer is always heard and answered.”(1397)

If you believe you have what it takes to become a member of the Four Men prayer groups, one of “God’s Marines” sign up today to begin a Forty Day Spiritual Boot Camp.

This Forty Day Spiritual Boot camp will give you all the training necessary to become a member of the Four Men prayer groups, “God’s Marines.” “For many are called, but few are chosen.” (Matthew 22:14).

May God Bless you in this Great Work, the Work of Bringing Souls to Jesus.

Rise up today to join the True Brotherhood of the Four Men Prayer Groups:

Seeks first the kingdom of God in all that he does especially by bringing souls to Jesus through the Four Men Prayer Groups.