Trending Now
You are at:Home»Columnists»Building 36
By Marge Fenelon on June 9, 2011 Columnists, Featured, Live in Christ 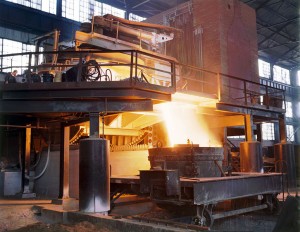 When I was a little girl, my mom would sometimes pack a supper for my dad, who worked second shift as a foreman at a steel manufacturing plant. Then she’d pack me up, load the supper and me into the car and drive over to the plant. I’m not sure whether those were days on which my dad had simply forgotten his supper, my mother just felt like bringing him something extra-special, or they wanted me to have the opportunity to visit with my dad since he usually was gone for work by the time I got home from school. Regardless, I looked forward to those little supper excursions, and I know Dad did, too.

Sometimes, as we pulled up to the gate, Dad would have one of his co-workers with him. Usually, they wanted to say hello to my mom and meet “daddy’s little girl.” Everybody there liked Dad; he had a way with people that made him both a friend and leader at the same time. I remember once Dad brought with him a black man whom he introduced as “Mr. Ed.” Mr. Ed was so kind, and had the warmest smile and handshake of just about anybody I’ve ever met. This was in the mid- to late 1960s, when racial tensions had risen to alarming levels in cities across the country, particularly in my home town of Milwaukee. Seeing my dad standing at the factory gate with Mr. Ed at first gave me a jolt because, of course, I’d heard far too much on the news. So, perhaps you can understand why my expectations were skewed. Meeting Mr. Ed washed away all the misconceptions and placed in me a new respect for people of color. The genuine friendliness of each man — Mr. Ed and Dad — toward the other was obvious. These two men liked and respected each other equally, and that made a huge and lasting impression on me.

My introduction to Mr. Ed was just one of the many interesting experiences I had when my mom and I would take supper to Dad. We met other of his coworkers, learned a little bit about the steel manufacturing process, and gaped at the huge steel coils and cranes in the steelyard. Once in a while, Dad would bring a little trinket from this office or an odd piece of steel or other material he’d found in the plant. Since security prohibited us from entering the plant, we visited outside the gate. When our visit was over, Dad would give me a hug and kiss, scoop up his supper, meander back to the gate and into the building that housed his office and a portion of the plant for which he was responsible. In my mind’s eye, I still can picture the hydraulic gate slowly closing behind Dad, hear his heavy footsteps on the concrete, and see the red brick of the building and the turquoise sign with the building number encrypted on it. It was Building 36.

Our middle son works for a security firm. He usually is scheduled at a particular condominium complex, but sometimes he’s given assignments in different parts of the city, or even the state. Most of the time, he works third shift.

One night, his assignment was to secure a vacated steel manufacturing plant. The company had long since closed the plant and was in the process of selling the land to a developer. The plant is in a tough area of Milwaukee — one ridden by crime and poverty. The proximity of the vacant plant made it a convenient place to cause trouble, deal drugs and, sadly, for those in despair to commit suicide. Luke’s job was to patrol a section of the plant in order to ward off riff-raff and prevent calamity. The plant to which Luke was assigned was the same plant at which Dad had worked.

Naturally, hearing about Luke’s assignment brought back memories of my girlhood visits to the plant. He had no idea which section he would guard, but we hoped it would be the same one in which Dad had worked. I described it as clearly as I could, struggling for every detail I could muster. Either way, we figured it would be intriguing and meaningful for Luke to guard the plant at which his grandfather once worked, even if it wasn’t the same section.

Luke wasn’t prepared for what he encountered that night. The place was desolate, dark, and vast. In fact, it was downright creepy because the buildings, although vacated, still had scattered signs of human activity. There were offices with lingering equipment, stairways that led to nowhere, old machines and tools lying around, and even an office chair just sitting in one corner, as if its occupant had just got up and left. Needless to say, Luke wasn’t all too comfortable in this place, and his discomfort grew with each new area or building he entered.

This building was somehow different, but Luke didn’t really know why. By all appearances, it looked to be about the same as all the other buildings. But, it just felt different. Whenever he entered this building, he later told me, he suddenly felt inexplicably safe. It was as if something, or someone, in that building was protecting him. Not wanting to fall into the danger of superstition, he tried not to think too much about it and went about his business. And yet, there was a definite difference. Just for fun, he picked up three rusted steel disks about 3 inches in diameter, leftover from bygone days, brought them home as a gift to me.

“Here you go, Mom,” he said. “I got these from the ‘safe building.’ Even if that wasn’t your dad’s building, at least they’re from the same factory.” I accepted them gratefully and spent a good long time that night, turning the steel disks over and over in my hands, missing Dad, and reveling in good memories of him.

The next day, we chatted about his experiences at the plant.

“Well, I’m sure your grandpa was interceding for your safety all night long,” I said.

“Yeah, but in just one building?” Luke questioned. “How come that one felt so different?”

Could it be that the “safe building” was the building in which my dad had worked?

Curious, we pulled up an aerial view of the plant on the Internet. Luke pointed out the section he had been guarding, and the “safe building.” Since the layout of the plant was not clear in my memory, I wasn’t really sure whether or not it was the same building. We e-mailed the link to the aerial photo to my brother, who remembers these types of things far better than I do.

He e-mailed back, pointed out various features of the plant, street names, and its orientation from our childhood home. Then, he pointed out the building in which Dad had worked. It was Building 36.

How was it that Luke felt safe in that building? When we consider the Communion of Saints, it makes perfect sense. Through the Mystical Body of Christ, we remain united with those who have passed from this life and into purgatory or Heaven. Apparently, God gave grandfather and grandson a chance to connect via a security assignment and an abandoned steel manufacturing plant. The instrument he used was Building 36.