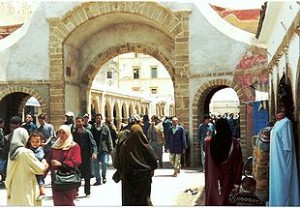 “You can sit here and talk about jihad from here to doomsday, what will it do? Suppose you prove beyond any shadow of doubt that Islam is constitutionally violent, where do you go from there?”

Such was Columbia professor Hamid Dabashi’s response to my assertion that Islamists seek to resurrect the caliphate and wage offensive jihad to bring the world under Islamic rule (during a 2008 debate titled “Clash of Civilizations“).

You see, ever since Egypt became a hot topic in the media, there has been no shortage of pundits warning against the Muslim Brotherhood; warning that an Islamist takeover in Egypt may have a domino effect in the region; warning that the ultimate goal of Islamists around the world is the resurrection of an imperialistic and expansionist caliphate (see Andrew McCarthy’s recent article).  Similarly, the controversy caused by the Ground Zero mosque brought Arabic-Islamic concepts that were formerly the domain of academics, such as sharia, into the fore.

Yet, as the West begins to understand the unique nature of its enemy—caliphate, jihad, and sharia all pose a perpetual, transcendent threat—it must also understand that a unique response is required. The clean, hygienic way the West likes to deal with socio-political conflicts will simply not do this time, especially in the long run.

Consider the caliphate: its very existence would usher in a state of constant hostility.  Both historically and doctrinally, the caliphate’s function is to wage jihad, whenever and wherever possible, to bring the infidel world under Islamic dominion and enforce sharia. In fact, most of what is today called the “Muslim world”—from Morocco to Pakistan—was conquered, bit by bit, by a caliphate that began in Arabia in 632.

A jihad-waging, sharia-enforcing caliphate represents a permanent, ideological enemy—not a temporal foe that can be bought or pacified through diplomacy or concessions.  Such a caliphate is precisely what Islamists around the world are feverishly seeking to establish.  Without active, preemptive measures, it is only a matter of time before they succeed.

In this context, what, exactly, is the Western world prepared to do about it—now, before the caliphate becomes a reality?  Would it be willing to launch a preemptive offensive—politically, legally, educationally, and, if necessary, militarily—to prevent its resurrection?  Could the West ever go on the offensive, openly and confidently—now, when it has the upper-hand—to incapacitate its enemies?

One may argue in the affirmative, pointing to the preemptive Iraq war.  Yet there are subtle and important differences.  The rationale behind the Iraq war was physical and practical: it was limited to the elimination of suspected WMDs and against a specific government, Iraq’s Saddam regime.  War to prevent the creation of a caliphate, on the other hand, is metaphysical and impractical: it is not limited to eliminating material weapons, nor confined to one government or person.

The fact is, the West does not have the political paradigms or language to justify an offensive against an ideological foe in religious garb.  After all, the same international culture that saw to it that an autocrat like Egypt’s Mubarak stepped down—simply because he was handicapped from responding to the protestors in the name of human rights—certainly cannot approve a preemptive offensive by the West articulated in terms of a “religious” threat.

What if an important nation like Egypt does go Islamist, a big domino in the quest of a caliphate?  It is a distinct possibility.  Can we also say that it is distinct possibility that the West would do everything in its power to prevent this from happening?  Of course not: all the Muslim Brotherhood has to do is continue pretending to be “moderate”—recently by removing its by-laws from the Web, as shown by Steven Emerson, including its intention of creating an “Islamic state” presaging the caliphate.

Indeed, the Obama administration has already made it clear that it is willing to engage the Brotherhood, differentiating them from “radicals” like al-Qaeda—even as the Brotherhood’s motto is “Allah is our objective, the prophet is our leader, the Koran is our law, jihad is our way, dying in the way of Allah our highest hope.”  Likewise, a theocratic, eschatologically-driven Iran is on its way to possessing nuclear weapons—all while the international community stands by.

In short, as it becomes clear that violence and intolerance are inextricably linked to concepts like caliphate, jihad, and sharia, so too should it become clear that the threat is here to stay—the caliphate, jihad, and sharia have a 1400-year legacy—prompting Dabashi’s observation: “Suppose you prove beyond any shadow of doubt that Islam is constitutionally violent, where do you go from there?”