Trending Now
You are at:Home»Learn & Live the Faith»Catechesis»Can a Scientist Believe in Miracles?
By Bob Kurland on July 6, 2016 Catechesis, Featured, Science 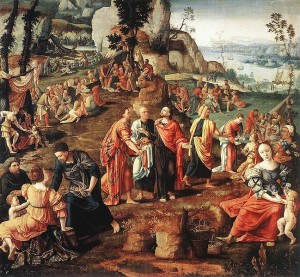 Some 22 years ago when I was being catechized, preparing to enter into the Church, I was much troubled by the Eucharistic phenomenon, transubstantiation. As a physicist, I could not understand how the wafer could become the flesh of Christ and the wine His Sacred Blood.

The wise old priest who was instructing me asked: “Do you believe in the miracle of Christ’s Resurrection?” I answered, “Yes, of course—that’s why I’m going to become a Catholic.” He then said, “Well, if you believe in one miracle, why not a second, or more?” And that answer made a lot of sense to me.

So the first property of a miracle is that it is related to faith in God, as an act or sign from God. Miracles are presumed to be rare events, supernatural — that is, not wrought by natural law.

Certainly not all rare events are miracles. Winning the lottery is a rare event. But if you needed that win to pay for a cancer medication, then you might consider it a miracle. We’ll see below what evidence the Church needs to certify a rare event — a medical cure or other phenomenon — as a miracle.

And finally, I’ll try to show, in both a personal and broader context, that science does not create roadblocks to a belief in miracles — if we assume God exists, is omniscient and omnipotent, then he can, as C.S. Lewis suggests, feed a new event into the pattern of natural law, bring down manna from heaven to feed the Israelites.

How the Church Judges Miracles

I’ll not discuss specific miracles ;  the various types and categories are well covered on the internet  (see the given links):

The Catholic Church has to be very cautious in endorsing miracles. Should a Church approved miracle turn out to be due to natural rather than supernatural causes or, worse yet, to be the product of fakery, the Church will wind up egg on her face. The supposed miracle will be cited by non-believers as additional evidence against the truth of the Church’s theological and moral stance.

A general protocol for approval of “Private Revelations” is given by the Sacred Congregation for Propagation of the Doctrine of the Faith (SCPDF). The first stage is approval by the bishop of the local diocese;  he may seek the aid of a committee of experts. Further approval is given by the SCPDF, either using a permanent commission, as in the case of healing miracles required for canonization, or an ad hoc commission.

These agencies can return three verdicts on whether the event is truly miraculous, not to be explained by natural laws: yes, no, can’t decide (translating from the Latin). Whatever this judgment, and the final judgment of the SCPDF, might be, it should be emphasized that other than those miracles which are part of Doctrine or Dogma (e.g. the Assumption of the Blessed Virgin Mary), the faithful are not required to believe in miracles, although they are encouraged to do so.

Marian Apparitions (paraphrased from the linked source)
1) There must be moral certainty, or at least great probability, that something miraculous has occurred, something that cannot be explained by natural causes, or by deliberate fakery.

2) The person or persons who claim to have had the private revelation must be mentally sound, honest, sincere, of upright conduct, and obedient to ecclesiastical authority.3) The content of the revelation or message must be theologically acceptable, morally sound and free of error.

4) The apparition must yield positive and continuing spiritual assets: for example, prayer, conversion, increase of charity.

Not all Marian apparitions have been approved. The most noteworthy example is that of Medjugorje.

Eucharistic Miracles
Eucharistic miracles occur when the host, previously consecrated, either issues blood or is transformed into human tissue. One of the oldest (8th Century A.D.) occurred at Lanciano Italy. The host was transformed into cardiac tissue, and subjected in 1970-71 and 1981 to histological analyses. The results corresponded in blood type (AB) to that found for the Shroud of Turin.   Remarkably, the tissue remained uncorrupted for the 1100 years after the miracle occurred.

The most recent in Legnicka, Poland occurred in 2013 when a host was dropped and then found to bleed. Examination by pathologists confirmed that it was most likely cardiac tissue.

These results are hotly contested by atheists who claim that they are either the result of fraud or that the internet reports of their occurrence are made up (including several in Buenos Aires when Pope Francis, then Archbishop Bergoglio, supposedly certified the miracle.) Given the reluctance of Church officials to certify miracles which might be revealed as fraudulent or natural (see the section on Healing Miracles below), it seems unlikely that this objection is valid. Whether all internet reports are totally accurate is another question.

Healing Miracles for Canonization
The process of canonization requires that the candidate for sainthood be responsible for at least two miracles. The miracles must be the result of prayer to the saint-to-be and only to him or her. Moreover, the miracle must involve a disease or injury that medical authorities say is totally without hope of cure. A committee of doctors (not all of whom need be Catholic) must examine the medical circumstances of the cure and certify that it is indeed miraculous.

A good example is that given by the canonization of Pope St. John Paul II. Three months after his death a French nun suffering from Parkinson’s disease (the same affliction that Pope St. John Paul II suffered from) prayed to him and woke up one morning in perfect health, even though she had been unable to move her legs before.

The second cure, after his beatification, was that of a Costa Rican woman who had been told by her doctors that her brain aneurysm gave her only a month to live.

We emphasize that the evaluation process for such miracles and for other miracles at shrines, such as Lourdes, is extremely rigorous. A group of doctors have to certify that there has been no previous medical treatment that could give a cure — that is, 0% chance according to conservative diagnosis for a cure. There is no way to argue that fraud is involved in these cases or that something outside of “natural law” has not occurred.

Can a Scientist Believe in Miracles?

Very briefly, the answer to that question is YES! Let me explain in detail. In the first place, it should be evident from the material above that the Church applies rigorous and scrupulous standards in evaluating miracles. Mother Church does not want to be embarrassed when fraud or natural causes are proven to be the cause of what are supposed to be miraculous events.

Secondly, if I were to answer no, I would have to assume that science explains everything, that “Naturalism” (or materialism or scientism) is the only explanation for all things and processes. In other words, I would accept that the so called laws of nature are just that, prescriptive, rather than descriptive attempts to give a mathematical picture of some aspects of our world.

If I believe that God is omnipotent and omniscient, I also would have to wonder why God could not, as C.S. Lewis proposed, feed new events into nature to create what seems to us to be a miracle. The so-called laws of nature, to repeat, are descriptive not prescriptive. God can’t make 2 + 2 = 5, but he can curve space so that the sum of the interior angles of a triangle do not add up to 180 degrees.

Accordingly, my faith in miracles does not contradict my belief that science is a wonderful  tool to understand the world, to help us appreciate the beauty described in Psalm 19A:

The heavens declare the glory of God; and the firmament sheweth his handywork.
Day unto day uttereth speech, and night unto night sheweth knowledge.
There is no speech nor language, where their voice is not heard.

Indeed, to take this a step further, to realize that the “unreasonable effectiveness of mathematics” in science is itself a sort of miracle.