Trending Now
You are at:Home»Featured»‘Canonizations give hope to Christians in the Holy Land’
By ACN-USA News on May 15, 2015 Featured, Those in Need 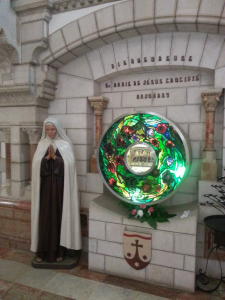 In an interview with international Catholic charity Aid to the Church in Need, Auxiliary Bishop William Shomali said that “sanctity is evident in the new Saints from Palestine. Saint Marie Alphonsine was very humble. Saint Mariam led an intense life of prayer and piety.

“When we read the life of the new saints, we are encouraged to emulate them. It is indeed a great source of encouragement for our Christians here. It also enhances the image of our people, showing that we can produce saints—not just terrorists.”

The bishop reported that more than 2000 pilgrims from Israel, Palestine and Lebanon will be taking part in the ceremony in Rome, most prominent among them Palestinian President “The canonization is first and foremost a spiritual event,” said the prelated, “but when our president heard of the canonization of two Palestinian women, he expressed the wish to travel to Rome. He is a friend of Pope Francis.

“This also has a political dimension. The name of Palestine will appear in the media. Some people will carry the flag. We have no objection to this. But we cannot reduce the event to its political significance. It is first and foremost a spiritual happening.”

There are enormous benefits for the Universal Church, the bishop added: “the two Saints from Palestine belong to the whole Church. One of the healing miracles that led to the canonization of the Blessed Mariam took place in Syracuse, in Sicily. After a novena a child was completely delivered from a heart condition in an inexplicable way. The child will take part in the Holy Mass. This shows that the new saints are intercessors not only for the Holy Land, but for the world Church as a whole.”

“But we shouldn’t see everything in black and white. There were also positive events last year. The Holy Father visited the Holy Land. In 2014 Egypt’s President el-Sisi won the elections. The Copts were happy about this. The anti-ISIS coalition was also established, even if it has not enjoyed any major victory so far. But perhaps the bad has outweighed the good. We hope that the reverse will be the case this year. We pray for this—in particular for the wellbeing of Christians in Syria and Iraq. The Lord is the master of history. He can change its course.”