Trending Now
You are at:Home»Featured»Cardinal Burke: Attacks on Unborn are Rooted in ‘Contraceptive Mentality’
By Patrick B. Craine on November 23, 2011 Featured, Life Issues & Bioethics 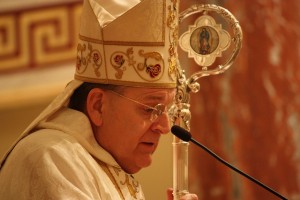 “The attack on the innocent and defenceless life of the unborn has its origin in an erroneous view of human sexuality, which attempts to eliminate, by mechanical or chemical means, the essentially procreative nature of the conjugal act,” the prelate, who heads the Apostolic Signatura (the Vatican’s highest court), told the McHenry County Catholic Prayer Breakfast in the Diocese of Rockford, Illinois on October 31st.

The prelate stressed the essential role of obedience in promoting a culture of life, and lamented that even some bishops had openly dissented from Pope Paul VI’s 1968 encyclical Humanae Vitae, which reiterated the Church’s opposition to contraception.

“A most tragic example of the lack of obedience of faith, also on the part of certain Bishops, was the response of many to the Encyclical Letter Humanae vitae,” he said.  “If the shepherd is not obedient, the flock easily gives way to confusion and error.”

But when the bishop is obedient to the Magisterium, he continued, “then the members of the flock grow in obedience and proceed, with Christ, along the way of salvation.”

“The shepherd must be especially attentive to the assaults of Satan who knows that, if he can strike the shepherd, the work of scattering the flock will be made easy,” he added.

“The so-called ‘contraceptive mentality’ is essentially anti-life,” the cardinal insisted.  “Many forms of so-called contraception are, in fact, abortifacient, that is, they destroy, at its beginning, a life which has already been conceived.”

“Through the spread of the contraceptive mentality, especially among the young, human sexuality is no longer seen as the gift of God, which draws a man and a woman together, in a bond of lifelong and faithful love, crowned by the gift of new human life, but, rather, as a tool for personal gratification,” he explained.

Correcting this “contraceptive thinking,” he said, is “essential to the advancement of the culture of life.”

The bishop also expressed concern that the developed countries of the West have become so “pervasively secularized.”

The U.S. pro-life movement particularly is facing a “period of intense struggle,” he noted, as the U.S. government under President Barack Obama has chosen to follow “openly and aggressively a totally secularist philosophy with its inherent anti-life and anti-family agenda.”

He mentioned specifically a talk by Health and Human Services Secretary Kathleen for the abortion lobby group NARAL on Oct. 6th.  “It is profoundly saddening to note that [Sec. Sebelius] presents herself as a practicing Catholic, while engaging in public speech which is gravely injurious to good morals,” he said.

“Catholics in public office, who obstinately persist in advocating and providing for the most egregious violations of the natural moral law, are the cause of the gravest scandal,” he continued.  “They confuse and lead into error their fellow Catholics and non-Catholics alike regarding the most fundamental truths of the moral law.”

A theme that ran throughout Burke’s talk is that pro-life work should be “full of hope.”  “The fundamental presupposition” of the effort to promote a culture of life, he said, “is the victory of life, which Our Lord Jesus Christ, has already won.”

“The forces which would lead us down the path of cultural death through the denial of the Christian roots of our culture are strong, and we must be steadfast in encouraging all who are engaged in the battle for life and for a culture of life,” he urged.