Trending Now
You are at:Home»Featured»Taking Our Thanksgiving Further
By Genevieve Kineke on November 23, 2011 Featured, Those in Need 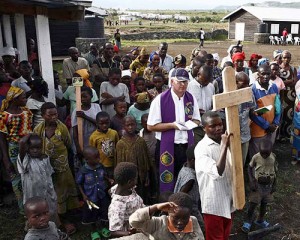 I found myself traveling with nothing to read, so I wandered over to the airport kiosk to find something to occupy me for a few hours. Having a small mountain of unread books at home, I couldn’t justify another, so it had to be a magazine, and who can resist National Geographic? The cover was tantalizing—a newly discovered cache of Anglo-Saxon gold discovered in an English field, but inside was the reminder that we have much to be thankful for, here in the bountiful west.

I scoured my treasure from cover to cover, which meant I came face-to-face with the humanitarian crisis in eastern Congo, centered in Goma, “its population exploding with displaced villagers, soldiers, profiteers, and aid workers. The lava-rumpled city sprawls between Lake Kivu, full of dangerous gases, and the restless Nyiragongo volcano.”

How are your plans for Thanksgiving dinner shaping up? Perhaps that puts questions of seating arrangements and recipes in perspective? This is more than the childhood admonishment: “Eat your peas, there are starving people in Africa;” this is the Christian reality that the Mystical Body is suffering deeply and we neglect so much. I neglect so much.

As with any secular publication, there was the uber-intellectual hand-wringing over too many Africans. Demographers and other academics cast their eyes dispassionately on the situation and considered the long-term consequences of finite resources and cultures in flux. Statistics were offered about how many babies were born to displaced persons—and even how many were born to perfectly happy families who didn’t seem to notice that they were crowding the elephants and mountain gorillas. In the backdrop was the reminder that there are now seven billion people on the planet—many of whom are illiterate and starving. Surely, “someone” must intervene, but what are we to do?

Well, as always, we are to love, even from this yawning distance and without all the details. God’s children—those created in his image and likeness—are suffering, which demands a response.  This begins with prayer, and that prayer may lead us to action. Perhaps not in Africa but in our own neighborhood, where there are problems enough. There is hunger here, though thankfully not from civil wars—more often it springs from broken families. We have our own profiteers, who may not openly sport rifles from dusty jeeps, but who seek to benefit by selling anything from drugs to children. Their market sprawls from coast to coast, affecting every income bracket, multiplying the victims in its wake.

The problems of the world are overwhelming. Sin has its consequences, and then there are the natural disasters inherent to the planet. God knows the magnitude of vice and destruction, just as he knows how very little and inconsequential we are. That is, how inconsequential our actions are when detached from his omnipotence and grace.

The paradox is that they don’t need to remain that way. We can despair of our microscopic efforts, knowing full well that in a world of seven billion, they count for little. Or we can do them anyway in good faith, linking our paltry initiatives to the saving power of God. And then those same infinitesimal works will be magnified by the generosity with which they are offered, rippling outward in a salvific wave of solace—the real help that can only be supplied by God himself.

Love begins in the home, but it needn’t be confined to our families. Love those who gather for this upcoming feast of gratitude, but prayerfully open your heart to the wider world, and see what more God would have you do.