Trending Now
You are at:Home»Featured»Casey Anthony and The Human Tragedy of our Time
By Christina King on June 30, 2011 Featured, Women 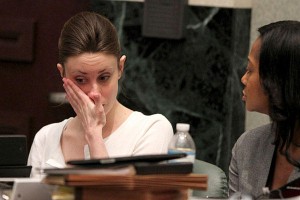 Whenever there is another story on the news involving a woman who has killed her child, I do everything I can not to listen or I change the channel. If I do learn any details (which seems to happen inevitably since every few months there is another incident and the media loves to give us every shocking detail over and over again), I am overwhelmed with emotions. When I heard the details about the woman who drowned all of her children in a bathtub, running after them one by one and then holding them down while the others waited their turn, I actually threw up. When I heard about the woman who put her babies in their car seats and then drove off a bridge, with one escaping to tell us the story, I could not help but have nightmares of her children’s frightening last moments.

Recently, I heard that in New York a newborn baby was thrown down a laundry chute to be incinerated. Thankfully, the chute was filled with garbage causing the mechanism to fail resulting in the discovery of the infant by another tenant following its tiny cries to the garbage room. In a town very near mine, a newborn baby was discovered last month near a dumpster in a parking lot. That baby also survived. However, many, many children do not.

So here we are again, another mother, accused of the unthinkable, killing her child. While I have not followed the specifics of this case and therefore do not have a commentary on the case itself, I am wondering what has the world come to that every day there is another story on the television in which another beautiful little baby has died at the hands of its mother. The case of Casey Anthony has been live-streamed on the web and cable. The entire trial can be watched at any given moment and every image pertaining to this horrific tragedy is shown to us.

The images evoke a deep a profound ache within my very being. It is not the images of Caylee, nor of Casey, but rather of the images of them together that are the most difficult for me to view.

Why is it becoming common place to turn on the evening news and see that a mother has killed her own child? I am sure that there are many contributing factors that have gotten us to this place, one of which is the shift from the family to the individual.  The other factor is that we have lost our understanding of the human person. We have objectified life, seeing each other as objects for use instead of looking at a person and knowing that the reason they were created was to love and to be loved. Theology of The Body holds that the body makes visible the invisible. Our bodies demonstrate a nature and that nature discloses our Creator and our Creator reveals our great dignity.

Here we have the precise antidote to this downward spiral where mothers no longer embrace their great ability to bring life into the world. It is to re-establish the dignity of the human person. What does that mean? It means we must understand our nature to understand our value and our purpose. We must help the people of this wounded world see their inherent value and reveal that they are not something to be consumed, to be used, not a means to an end. A person is somebody, not something.

We have fallen under the tyranny of moral relativism,that is a subjective idea that there is no right or wrong, but rather we decide for our selves what is right or good. It is this error that is paving the way for people to make arbitrary rules for living out their lives. When a personal “truth” replaces intrinsic truth, the individual and his “rights” or “wants” circumvents all others’ rights or wants. The result is mothers who kill their children and we call it “choice” in one circumstance and murder in another. Moral relativism has given mothers like Casey Anthony “permission” to decide what actions are good or bad. Who is teaching the concepts of moral relativism? The voices are everywhere.

At the heart of liberty is the right to define ones own concept of existence of meaning, of the universe, of the mystery of human life (Planned Parenthood Vs. Casey 1992)

Really? The Supreme Court has defined a “right” to “define our own concept” and our own “meaning… of the mystery of human life”? No wonder so many mothers have “defined” it as expendable. I reject this statement which is devoid of love and instead encourage you to consider something far more beautiful that is a remedy for a hurting world.

The remedy for this tragedy is to rediscover our value, our great goodness, our dignity which comes from being made in the image and likeness of God. Until we address the real issue, which is the loss of the dignity of the human person, we will continue treating the symptoms of the disease rather than healing it.

Mary, Mother of Jesus, Please pray for all mothers and grant us the grace to be the mothers we are all called to be. Jesus, take our hearts and give us yours.