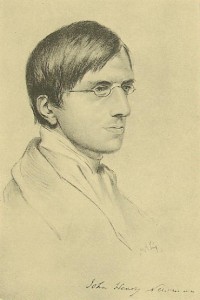 DEEPLY do I feel, ever will I protest, for I can appeal to the ample testimony of history to bear me out, that, in questions of right and wrong, there is nothing really strong in the whole world, nothing decisive and operative, but the voice of him, to whom have been committed the keys of the kingdom and the oversight of Christ’s flock. The voice of Peter is now, as it ever has been, a real authority, infallible when it teaches, prosperous when it commands, ever taking the lead wisely and distinctly in its own province, adding certainty to what is probable, and persuasion to what is certain. Before it speaks, the most saintly may mistake; and after it has spoken, the most gifted must obey.

Peter is no recluse, no abstracted student, no dreamer about the past, no doter upon the dead and gone, no projector of the visionary. Peter for eighteen hundred years has lived in the world; he has seen all fortunes, he has encountered all adversaries, he has shaped himself for all emergencies. If there ever was a power on earth who had an eye for the times, who has confined himself to the practicable, and has been happy in his anticipations, whose words have been deeds, and whose commands prophecies, such is he in the history of ages, who sits from generation to generation in the Chair of the Apostles, as the Vicar of Christ and Doctor of His Church.

It was said by an old philosopher, who declined to reply to an emperor’s arguments, “It is not safe controverting with the master of twenty legions.” What Augustus had in the temporal order, that, and much more, has Peter in the spiritual. When was he ever unequal to the occasion? When has he not risen with the crisis? What dangers have ever daunted him? What sophistry foiled him? What uncertainties misled him? When did ever any power go to war with Peter, material or moral, civilized or savage, and got the better? When did the whole world ever band together against him solitary, and not find him too many for it?

All who take part with Peter are on the winning side. The Apostle of Christ says not in order to unsay; for he has inherited that word which is with power. From the first he has looked through the wide world, of which he has the burden; and according to the need of the day and the inspirations of his Lord, he has set himself, now to one thing, now to another, but to all in season and to nothing in vain. He came first upon an age of refinement and luxury like our own; and in spite of the persecutor, fertile in the resources of his cruelty, he soon gathered, out of all classes of society, the slave, the soldier, the high-born lady, and the sophist, to form a people for his Master’s honour. The savage hordes came down in torrents from the north, hideous even to look upon; and Peter went out with holy water and with benison, and by his very eye he sobered them and backed them in full career. They turned aside and flooded the whole earth, but only to be more surely civilized by him, and to be made ten times more his children even than the older populations they had overwhelmed. Lawless kings arose, sagacious as the Roman, passionate as the Hun, yet in him they found their match, and were shattered, and he lived on. The gates of the earth were opened to the east and west, and men poured out to take possession; and he and his went with them, swept along by zeal and charity, as far as they by enterprise, covetousness, or ambition. Has he failed in his enterprises up to this hour? Did he, in our fathers’ day, fail in his struggle with Joseph of Germany and his confederates—with Napoleon, a greater name, and his dependent kings—that, though in another kind of fight, he should fail in ours? What grey hairs are on the head of Judah, whose youth is renewed as the eagle’s, whose feet are like the feet of harts, and underneath the Everlasting Arms?

“Thus saith the Lord that created thee, O Jacob, and formed thee, O Israel. Fear not, for I have redeemed thee, and called thee by thy name! Thou art Mine.

“When thou shalt pass through the waters, I will be with thee, and the rivers shall not cover thee.

“When thou shalt walk in the fire, thou shalt not be burned, and the flame shall not kindle against thee.

“For I am the Lord thy God, the Holy One of Israel, thy Saviour.

“Fear not, for I am with thee, I am the first, and I am the last, and besides Me there is no God.”

[Cardinal Newman was received into the Catholic Church 170 years ago today, October 9, 1845.]