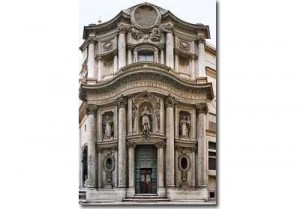 This article focuses on the meaning and uses of the term “tradition.” The next article will speak of the serious error of nostalgia as a motivation for design.

I believe it was C.S. Lewis who coined the term “verbicide”. The meaning and significance of the words “tradition” and “nostalgia” have both suffered from this. Here is what he had to say about this process of changing the meaning of words.

“But the greatest cause of verbicide is the fact that most people are obviously far more anxious to express their approval and disapproval of things than to describe them. Hence the tendency of words to become less descriptive and more evaluative; then become evaluative, while still retaining some hint of the sort of goodness or badness implied; and to end up by being purely evaluative — useless synonyms for good or for bad.”

It’s not hard to understand why so many have expressed disapproval of the architecture of the past 100 years. It’s easy to jump on the bandwagon of condemning it all. The neo-neo classicists see no redeeming quality in any of it. At least I have yet to read or hear them ever state this. They dismiss it all as the ‘zeitgeist of modernism’. As C.S. Lewis implied, using such a term (i.e. zeitgeist), is a statement of disapproval to summarily dismiss any and all sacred architecture which isn’t a representation of works of the past.

It’s easy for people of good will to accept this. There are many examples of seemingly sterile environments devoid of all humanity. But is this really true? Yes … to some extent it is true. But what many fail to recognize is that this has always been the case. Even during the Renaissance, which is held up as an idyllic period in the history of architecture by most architectural historians (the nostalgia trap), was in many respects no different than today. I too believed it was a ‘golden age’ until I learned the truth first hand by studying and working in Florence, Italy.

One of the most important things that I learned was that not all works of architecture during any period in history are of equal value or significance. Some are good and some are bad. And isn’t it, or shouldn’t this be obvious? Simply because two buildings are very similar, stylistically, doesn’t mean they are equally significant. There are many examples of Baroque architecture in Rome. Some are great and some are terrible. An example of a great work of Baroque architecture is the Church of San Carlo alle Quattro Fontane.

As Pope John Paul II pointed out, architects primarily define space. The concave, convex external facade draws you in unlike any other church with a flat facade. You are ‘captured’ by the space defined from the design of the facade. The elliptical floor plan creates an extraordinary spatial effect. In verges on the greatness of organic architecture as defined and developed by Frank Lloyd Wright many years later. Unlike in rectangular spaces, it is not possible for the mind to immediately calculate what the experience of moving through the space will be like.

Think about this for a moment. When you walk through a rectangular space … down a hallway … it is possible for the mind to easily imagine what the experience will be like as you move forward. It is possible for the human mind to imagine how the perspective will change. This is not the case with within an elliptical space. It is also not possible in organic architecture. This is the richness of organic architecture. Why is it so inspiring and exhilarating to drive down the Blue Ridge parkway here in Virginia? It’s because the roadway which winds through the mountains, created by God, presents you with an infinite variety of spaces. I N F I N I T E!

Rectangular spaces have only four vanishing points when constructing a perspective. You typically are only looking in the direction of one of them. That is why the mind can predetermine the experience of moving through that space. Organic spaces have an almost countless number of vanishing points, whether the ‘organic’ design of God or one crafted by an architect. Frank Lloyd Wright understood this. That is one of the primary reasons he is the greatest architect since Brunelleschi. Brunelleschi did just about everything a great architect can do. And while he hinted at the organic, he did not define and then explore organic spaces as Frank Lloyd Wright did.

Now, if you strip all of the Baroque detailing off of the Church of San Carlo alle Quattro Fontane, you are still left with the powerful and very prayerful space as designed by Boromini. THAT’S what makes it so great. It is like a great song, with such a simple and yet powerful melody, supporting lyrics that are meaningful to the millions of people they touch. You can respect the melody and words and yet perform it in countless ‘styles’ and it still remains just as powerful. That’s why a song like “A Song for You” by Leon Russell, has been recorded and performed by countless singers and singer-songwriters for decades. This is why so many variations of Romeo and Juliet have been produced, in ways that make the eternal truths relevant to the masses. People can learn the same lessons from West Side Story without ever seeing Romeo and Juliet. And yet, any musicologist can tell you that just because a piece of music has all of the stylistic elements of Bach, Chopin, Stravinsky, it can easily be garbage; a poor imitation,with little cultural relevance.

Architecture is very similar. The great lessons to be learned from the Rococo, Baroque, Medieval, Renaissance, Gothic architecture, etc., is that what makes them significant is not so much the ‘style’ but the underlying eternal truths these works embody. Mostly, as Pope John II pointed out, it is about the power and relevance of the series of spaces the architect determines. These spaces need to speak to the lives of the people in the period in which they were designed and to the extent possible, those who will live these spaces in the future. Spaces are defined by the language of architecture. And while the truths are eternal, they can easily seem irrelevant if they are not translated into the vernacular. Neo-Neo classicists miss this point entirely. In fact, one of their great heroes (Alberti), makes this perfectly clear in his treatise. He said all architecture MUST include the vernacular. Any yet the neo-neo classicists ignore this entirely. It’s a source of a crisis for them.

So let’s define tradition in light of Catholic teaching. The catechism states that Tradition is a “living transmission” …. of … “all that she believes”. Something that is “living” is clearly something that is not frozen in time. It implies there being change while in no way contradicting the eternal truths of the faith. A building can be dignified, elegant and sacred independent of any style.

If we look at the Bible, we will see there are two instances of where both a building and a ‘product’ were designed according to instructions from God. It doesn’t get any more authoritative than that! The first is the Temple and the second is the Tabernacle and Ark of the Covenant. When one reads the biblical references to the construction of the Temple in 3 Kings, 2 Paralipomenon or the Book of Ezechiel, we see that two things are described: dimensions and materials. There is no reference to any particular style. In the Book of Exodus, when the Lord speaks to Moses, he gives a detailed description of the making of the tabernacle, the ark, the candlestick, etc. Dimensions are again given and the specific materials to be used are also mentioned. There is no mention of any particular style.

What are described are characteristics and qualities. These reflect the eternal truths. For example, it is possible to design a noble, elegant and stately column in numerous materials, reflecting a specific style or no specific style. The column could be designed by people of different cultural backgrounds and yet we would all recognize them as being noble and elegant. The idea that there is one ‘style’ that trumps all others is unfounded.

I have read long and detailed explanations by architectural and art historians about the greatness of classical architecture … and I’m with them on all of that. But then, in order to justify their mimicking or copying these works, they simply say something to the effect of, “classical forms lend themselves particularly well to sacred architecture.” Where is that written? Isn’t the deeper reality of sacred space, or any and all architecture for that matter, associated with the details of the lives of those who will use or inhabit those spaces … the living, not the dead … as well as the detailed functional requirements of any particular space?

In many ways I believe there is a strong desire on the part of many architects to do something so profound, so monumental, that they focus on architectural forms and styles that they can leverage to achieve this. And at the same time, they don’t want to do any of the ‘heavy-lifting’. The heavy lifting is understanding the problems, the fears, the anxieties, the hopes, the aspirations and desires of the people the architect should serve. Yes … serve. It is so much easier to simply ‘serve’ up modifications or a conglomeration of the great works of others, without having to explore the unknown. It has been this way for centuries.

The history teachers presented the great works of the Greeks and Romans as something to emulate, to the point of motivating many to mimic them if not plagiarize them. In some ways it would be like a history teacher teaching that the Gettysburg Address is so great that we must imitate it, instead of realizing that the speech relates to the sentiments of one man, at one time during a critical moment in U.S. history, even though the message was for a nation and had far reaching consequences. And yet what neo-neo-classicists do is design structures that say …

“ Three score and six years ago, our daddy’s brought hitherto this continent….” …. you get the point.

The next article will give some insight into the fatal trap of nostalgia, that while it can affect any architect or designer, it represents a particular form of slavery for the neo-neo-classicist.