Trending Now
You are at:Home»Columnists»Catholic Bishops and the Nuns
By Colleen Carroll Campbell on May 18, 2012 Columnists, Featured, Vocations 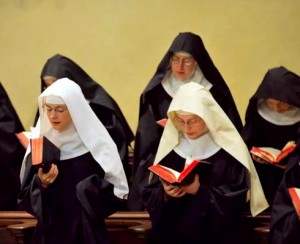 The Vatican called it a reform but it’s actually a “war against nuns,” an unprovoked “crackdown” on the dwindling ranks of America’s 55,000-plus religious sisters by a power-hungry pope and his ungrateful bishops. Rather than thanking the aging sisters for their years of service to the oppressed, the patriarchal Catholic power structure is punishing them by putting their chief umbrella organization into receivership. The goal: Force the good sisters to stop focusing so much on the poor and start fixating on the same petty social issues that preoccupy bishops.

Well, at least that’s what the wire stories say. Complete with photos of sweet-faced young nuns sporting old-fashioned habits as they kneel in communal prayer, most reports about the doctrinal assessment released by the Vatican last month have portrayed its planned reform of the Leadership Conference of Women Religious as an out-of-the-blue, over-the-top assault on America’s most beloved and uncontroversial Catholics. It has been cast as the equivalent of a bishop excommunicating Mother Teresa because she skipped the March for Life to nurse lepers.

As is often the case in secular press coverage of Catholic matters, though, that isn’t the full story — or even the half of it. For starters, Mother Teresa’s sisters — and most of the religious orders boasting those young, habited nuns typically pictured in articles about this controversy — don’t even belong to the group targeted by the Vatican. The Missionaries of Charity, like several other thriving Catholic religious communities here in the St. Louis area, belong to the Council of Major Superiors of Women Religious, another, smaller umbrella organization founded two decades ago by American religious sisters voicing the same concerns about the LCWR that the Vatican did last month.

Those sisters, and more than a few whose religious orders still belong to the LCWR, have lamented for years that an organization formed at the Vatican’s request and that officially answers to the Vatican shows such ambivalence to and disregard for Catholic teaching on everything from the role of Jesus in salvation history to the right to life of every human person. And like many lay Catholics bewildered by the turn toward New Age spirituality and trendy political activism among religious orders once known for their traditional piety and charitable work, these sisters see the Vatican’s reform of the LCWR as amply justified.

It’s also worth noting that the Vatican document widely panned as an insult to American religious sisters begins with praise for their “great contribution” to the church in forming and staffing “many schools, hospitals and institutions of support for the poor.” The document is not intended “to offer judgment on the faith and life of women religious,” it says; it simply aims to analyze doctrinal problems in an organization that represents those women — problems that have serious repercussions for all Catholics.

Among those repercussions is confusion about what the Catholic Church teaches. Whether they like it or not, religious sisters and their organizations are viewed in the wider culture as representatives of the church itself.

When the leadership of the LCWR publicly rejects Catholic teaching on the all-male priesthood, as it did in 1977, or publishes a handbook encouraging sisters to consider scrapping celebration of the Mass because some find the presence of a male priest “objectionable,” or hosts a keynote speaker at its 2007 national assembly who calls Catholic sisters to move “beyond the church, even beyond Jesus” — well, it’s not hard to see why non-Catholics and even many Catholics might be confused about what the church teaches and how much it matters. Nor is it surprising that the Vatican would try to rein in a group that enjoys all the perks of calling itself Catholic without abiding by the restraints that come with that institutional identity — namely, the responsibility to publicly defend Catholic teachings even when they clash with the cultural zeitgeist.

The real problem with groups like the LCWR is not their rebellion against church authority but their conformity to the spirit of the age. In attempting to become “relevant” to the world, they have rejected the most characteristic markers of Catholic religious life — from communal living to shared prayer regimens and fidelity to church teaching. Yet a 2009 survey by Georgetown University’s Center for Applied Research in the Apostolate found that those are the very markers that attract today’s young adults to religious life.

The Vatican is not waging a war on nuns. It is calling the LCWR and its graying membership to rediscover the riches of tradition, to renew their commitment to a faith ever ancient and ever new. It’s a challenging and humbling call, but it’s not an act of aggression. It’s an invitation to renewal, one that is long overdue.