Trending Now
You are at:Home»Featured»Catholic Dad—a Book to Inspire
By Patti Maguire Armstrong on September 23, 2014 Featured, Men, On Books, Parenting 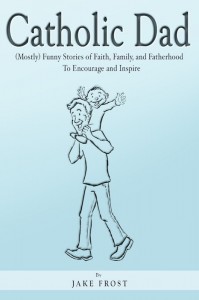 Society is schizophrenic on fatherhood. Studies show that by every conceivable measure, children are better off with fathers. Yet the entertainment world often portrays them as bumbling or non-essential. The feminist movement has furthered that notion because at least for some take-charge kind of women, men just get in the way anyways.

But it isn’t so, that men get in the way. They are supposed to be leading the way, but something went wrong in too many families. The sad thing about bad examples is that they tend to rub off. Boys and girls without Daddies get confused and stay the course.

So many men have gone missing from their families that it’s refreshing to read the thoughts of a man who just wants to breathe fatherhood for a time. Jake Frost is that man and the book Catholic Dad is his thoughts on fatherhood.

His ponderings often converge with Scripture. I especially love the quotes at the end of each chapter. Here are two favorites:   “Courage is fear that has said its prayers” –Dorothy Bernard and “No talent can survive the blight of neglect” –Anonymous.

Jake is just a plain old Dad thinking about how much he loves being a dad even through the difficulties. Nowadays, that’s heroic. I suppose it always was, but with so many of them missing, we can see clearly now that nothing takes the place of a good Dad.

As the mother of a large family, when I read this theme in a number of Frost’s entries I can almost feel that old fatigue that comes from waking up at night for babies. Nighttime childcare may be an issue that divides parents, from co-sleeping, to rocking a baby to sleep, to letting him cry it out.

Regardless of the chosen approach, I discovered a gem in one essay to which everyone can relate. Frost was a nightwalker. When his daughter woke up crying, he felt it took “forever” to walk around with her until she settled back down to sleep. A friend suggested that Frost become a clock-watcher and that the time would go by quickly. He discovered that what seemed “endless” turned out to be only a few minutes. On the first night, it was six minutes. His thoughts that followed, however, were something that continued on.

“At three in the morning, it feels like endless hours as you walk back and forth in the baby’s room. You think you must be putting a thousand miles of tread on ten feet worth of carpet. But when I watched the clock, I was amazed: in reality I only took six minutes to get her back to sleep.

“All I needed was a point of reference to put things in perspective.

In the short run, the clock is a great point of reference. But for the big work of parenting, God gave us the real reference point to put our task into perspective: eternity. God “put eternity into man’s mind…” Eccl 3, 11.

“We’re going to live forever, and our kids are too. So when it gets hard, remember the magnitude of our calling as parents: ‘an eternal weight of glory beyond all comparison…’” 2 Cor 4,17.

Even though I’m not a Dad, I could relate to many of those thoughts. As a matter of fact, I can feel their weight at this stage in my life. My kids are ages 31 to 12. Babyhood seems so long ago in respect to how far we’ve come and yet, those days and sleepless nights that sometimes felt like they dragged on, were over in what now seems like a blink of an eye.

With an eye on eternity, Jake experiences fatherhood in a way relevant to his faith in the here and now. In the end, children become very relevant to our eternity. We are given the responsibility of leading them to God and along the way, if we try to do well, that is exactly where they lead us.