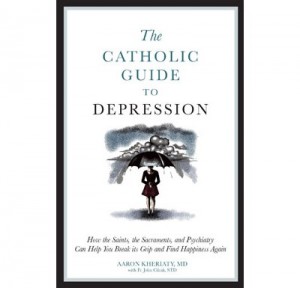 Being father to five young boys and maintaining both a university teaching post and a busy clinical practice would seem to be a prescription for physical and emotional meltdown. Yet in addition to all this, Catholic psychiatrist Dr. Aaron Kheriaty found time to write a very practical and much-needed book on depression.

The Catholic Guide to Depression: How the Saints, the Sacraments, and Psychiatry Can Help You Break Its Grip and Find Happiness Again (co-authored with Father John Cihak and published by Sophia Institute Press) provides a deeply informed, insightful and well-balanced approach to a widespread and very personal problem. There is no such thing as “Catholic depression” but there is a distinctive Catholic approach to this and other mental conditions that draws upon the best of modern science and the traditional spirituality of the Church.

Dr. Kheriaty is Director of Residency Training and Medical Education in the Department of Psychiatry at the University of California, Irvine, and is co-director of the program in Medical Ethics at the School of Medicine there. He received his B.A. in Philosophy from Notre Dame and his medical degree from Georgetown University. Fathers for Good exchanged e-mails with him for this interview.

Fathers for Good: You point out that the words “psychiatry” and “psychology” are based on the Greek word for “soul” – and that the Church has centuries of wisdom in this area. Yet it seems that these medical fields are based on secular and even anti-religious foundations. What’s a Catholic to do?

Dr. Kheriaty: It’s true, according to its original Greek root, the word “psychiatrist” literally means “doctor of the soul.” But in modern psychiatry, this original meaning has largely been abandoned. Psychiatrists today tend to focus on the body – especially the brain – to the exclusion of the soul. Other critics have leveled the opposite complaint against psychiatry and psychology, claiming that we overstep our bounds and often tread on territory that was once occupied by religion. For example, the great Bishop Fulton Sheen wondered whether the psychoanalyst’s couch had replaced the priest’s confessional in the modern world.

Despite the legitimate concerns raised by these critics, Blessed John Paul II encouraged a dialogue between science/medicine and religion, and he reaffirmed that a genuine dialogue presupposes that both parties have something worthwhile to say to one another. The confessional was never meant to cure neurosis, and the analyst’s couch was never meant to absolve sin. John Paul II said the following in an address to a group of psychiatrists in 1993:

“The confessional is not and cannot be an alternative to the psychotherapist’s office, nor can one expect the Sacrament of Penance to heal truly pathological conditions. The confessor is not a physician or a healer in the technical sense of the term; in fact, if the condition of the penitent seems to require medical care, the confessor should not deal with the matter himself, but should send the penitent to competent and honest professionals.”

How can a good Catholic trust himself to psychiatry and psychology? As Blessed John Paul II says here, it is important to find “competent” and “honest” professionals – those who understand the boundaries of their discipline, and who can approach a patient’s spiritual, religious, and moral convictions with respect, even if the psychiatrist does not share these convictions.

Clergy and medical professionals should work together here. I try to encourage a “both-and” rather than “either-or” approach to healing. When a patient who is a religious believer asks whether he should pray more or take a medication to help with an episode of depression, my answer will likely be “yes” to both.

FFG: Is depression all in our minds, or a chemical imbalance of the brain?

Dr. Kheriaty: Depression is a complex condition that affects more than just a person’s emotions; it impairs one’s cognition, one’s perceptions of the world, one’s physical health and bodily functioning. The causes of depression are likewise complex. The medical model that characterizes depression as simply a “chemical imbalance in the brain” is true but also incomplete. Neurobiological and genetic factors do play a causative role; but psychological, interpersonal, behavioral, cultural, social, moral, and indeed, spiritual factors also play a role. Depression should be understood and treated from all of these complementary perspectives.

Medications and other biological treatments have an important therapeutic role in many cases, as does psychotherapy provided by competent, sensitive, and skilled professionals. These should be integrated with spiritual support and spiritual direction, a life of prayer and the sacraments. Diagnosing the complex interplay of body and mind is often not easy, and requires a respectful reverence before the mystery of the human person. Again, to quote Blessed John Paul II from the same address I cited above:

“By its very nature your work often brings you to the threshold of human mystery. It involves sensitivity to the tangled workings of the human mind and heart, and openness to the ultimate concerns that give meaning to people’s lives. These areas are of the utmost importance to the Church, and they call to mind the urgent need for a constructive dialogue between science and religion for the sake of shedding greater light on the mystery of man in his fullness.”

It’s my hope that The Catholic Guide to Depression can, in some modest way, be a contribution to this dialogue.

FFG: Some depressed people are against taking “mind-altering” drugs such as antidepressants. What do you say to them?

FFG: You say that mental illness and depression usually can’t be cured by prayer or the sacraments alone.

Dr. Kheriaty: Depression and other mental illnesses are not reducible entirely to spiritual or moral problems. Like other medical illnesses, biological factors like one’s genetic makeup, or environmental factors outside a person’s control, like early life trauma or attachment problems, play an important role in depression. If we ignore these factors and prematurely “spiritualize” every emotional or mental health problem, we risk ignoring important means of healing. We also risk unjustly stigmatizing the person who is suffering from depression, and blaming the victim for something that may not be his or her fault.

Human beings are not pure spirits like angels; we are ensouled bodies, and the bodily dimension cannot be left behind. In the Apostles’ Creed, Christians profess faith in the “resurrection of the body.” We are neither disembodied souls, nor are we simply material bodies. Rather, in each human person there is a substantial unity between soul and body, between spirit and matter. This Christian perspective is consistent with experimental findings from modern science. Modern medicine has shown that there is a profound connection between the mind and the body: what affects the one has profound effects on the other. For example, modern neuro-imaging techniques have demonstrated that psychotherapy can produce the same changes in the brain as antidepressant medications. This is why I try to approach depression both from “above,” examining its psychological, social, and spiritual causes and cures, as well as from “below,” examining its genetic and other biological roots and its medical remedies.

FFG: You bring up the ancient “four humors” theory of personality and behavior.

Dr. Kheriaty: The “four humors” theory of depression, which grew out of the Hippocratic school of thinking, acknowledges that physical and bodily factors play a significant role in depression. The ancients believed that illness was caused by an imbalance in the bodily “humors” or fluids (blood, phlegm, black bile, yellow bile). In the case of depression, they believed there was an excess of black bile, or “melan-choler”. While modern medicine obviously no longer subscribes to the details of this theory, the basic premise of the theory – that depression has bodily causes – is very much with us. Today we are apt to speak more in terms of neurotransmitters (serotonin, dopamine, and norepinephrine) in the brain than humors in the body; but the basic premise is the same. It was only in the late 19th century, with the theories of Freud and the early psychoanalysts, that the focus shifted to unconscious psychological factors as the causes of mental illness. In recent decades, the trend toward “biological psychiatry” has shifted back in the direction of the ancient humoral theory. So the idea that physical or biological factors play a role in depression is nothing new; it is not an invention of modern neuroscience, but has ancient roots.

FFG: Tell us about your own life. How do you work your time as father, husband and medical professional?

Dr. Kheriaty: My wife is a marvelous woman who somehow manages five boys at home while I’m at the office. Her job as a mother and homemaker makes my job as a psychiatrist look easy by comparison! As with most people today, it is a struggle to balance the demands of work, family, social life, and so on. The key, I think, is to make time every day for prayer, and to receive the sacraments frequently. I try to examine in prayer and on a yearly retreat my use of time to see whether things are getting out of balance. It’s important to ask whether family life is being squeezed by professional, social, or other activities.

I’ve found that somehow when we put God first in our life and attend to our spiritual life, our Lord helps to multiply our time. Prayer helps us to keep things –work, family life, friendships, etc. – in the proper perspective. It’s a daily challenge to strike the right balance, and often trying to meet all the demands is tiring. But it is also a great joy and blessing to be entrusted both with the upbringing of my children at home, and with the care of patients at work. I trust that if I remain faithful, God will let me rest someday with him in heaven. Until then, I try my best to offer to God my professional work, my family life, my friendships, and my prayer to God, in the hopes that with his grace, these efforts will bear fruit.