Trending Now
You are at:Home»Featured»Central African Republic: Saying “No” to Hatred and Revenge
By ACN-USA News on February 18, 2014 Featured, Those in Need 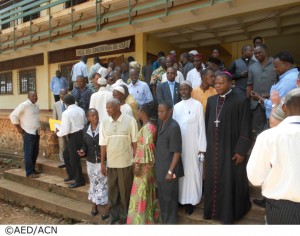 A local Catholic has expressed a resounding “No” to hatred and revenge in the Central African Republic in that face of hatred and conflict.

Archbishop Dieudonnè Nzapalainga of Bangui made his commented while speaking recently with international Catholic charity Aid to the Church in Need (ACN).

In the interview, the archbishop lamented that the Central African Republic hatred had “entered the veins of the people” and he seconded the warnings of the United Nations about the threat of an impending genocide.

He described how he had recently traveled to a town by the name of Bodango, some 125 miles from the capital Bangui, a community from which all the Muslims had disappeared.

When he asked members of the Anti-Balaka what had happened to them, he was told that the Muslims had been driven out.

“That over 200 Muslims, along with all their children and old people could have walked 125 miles is impossible,” he said.

He told two government ministers that he “had seen things that make one think of a genocide,” but the officials insisted that the people had merely been driven out.

“If there is no one to hold back the hand of the devil here, he will achieve his goal. Many people will be hunted down and killed,” the archbishop warned.

Yet he emphasized that it was wrong to speak about an interreligious conflict. He described the Anti-Balaka, who are often described in the media as a “Christian militia” as a “self-defense movement that has now left the politicians behind.”

Similarly, in Bohong, a small town about 10 miles from Bouar, where the Séléka rebels had attacked the Christian population, Archbishop Nzapalainga was reminded of the genocide in Rwanda.

“When I arrived there, part of one area of the town has been completely burned down. I also saw that people had been burnt alive. I saw human bones and human heads.”

“I had only ever seen that sort of thing in films about Rwanda before, but never here with us. I think that evil was there. Now the evil has touched us. It shows itself in the desire to kill, to destroy. This is the devil.”

What is above all necessary now is to restore security in the country, he argued. “This is the priority of priorities. Absolutely! This is the first thing of all!”

People were living in fear and terror, he said, the prevailing attitude was, “My neighbor is the one with weapons, and I am afraid of him.”

The archbishop called on the United Nations to send peacekeeping troops to protect people and said that the current military presence was inadequate, given the size of the country.

“Even in the capital Bangui it proved impossible,” he complained. The situation is very dangerous, he said, and there is a threat of “anarchy, chaos, total disorder.” The archbishop pointed to missionaries in particular as “a point of reference” and a “protective bulwark” for the people.

“Through them the people can see God. They also see that the power of love lies in them.”

He emphasized the fact that these missionaries had not been compelled to stay on but had remained of their own free will. Their presence was “like a light, lighting up the night,” he said.

“The devil scatters, God gathers. When the people gather around the Church, then God is there,” the archbishop explained.

The Church must be “the heart that beats in the rhythm of love, without distinguishing as to religion or ethnic identity,” the prelate said.

The archbishop concluded: “The Bible is a book that says, ‘Comfort ye, comfort ye my people.’ This comforting is not merely a theory. It becomes effective when I stand at the side of my brother, who is enraged.”

“I experience his suffering, his weeping. And often it is both beautiful, and yet at the same time painful, that in Africa, when someone dies, the people come together, weeping, and fall into one another’s arms to support one another.”

“They share their pain in this mourning. My brother suffers with me, my sister suffers with me. This is the kind of sympathy that is shown by the other person. And I believe that God is there.”