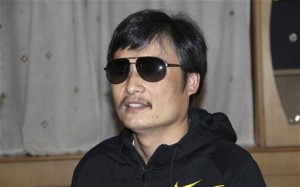 I was going to devote this article to my recent trip to New Zealand, where I gave seven talks to a total of over 3,000 people. But then a blind Chinese human rights activist named Chen Guangcheng escaped from house arrest, and my phone began to ring off the hook.

The media wanted to know what I thought of this case, so similar to my own. You see, Chen originally got in trouble in the same manner that I did: by reporting on forced abortions and forced sterilizations being carried out by Communist Party officials in the village he was living in.

Of course, our experiences were widely separated in space and time. I was living in the far south of China in 1980 when the one-child policy was first imposed upon the peasants of the Pearl River Delta. Chen was living in the far northern province of Shandung in 2005 when that same policy, some 25 years later, resulted in the arrest and abortion of thousands of women in his county alone.

We were both arrested for our trouble, but here the similarities end. I was held for three days and then released, largely due to my get-out-jail-free card—also known as a U.S. Passport.

Chen, on the other hand, was a subject of the People’s Republic of China. He was arrested, brought before a kangaroo court, and sentenced to four years in prison for “disturbing the public order.” Thereafter he was put under “house arrest,” without even the pretense of a trial. Up to a hundred security personnel patrolled the streets of his village to make sure he was kept sequestered and silent.

A self-taught country lawyer selflessly trying to help his fellow citizens would be a sympathetic figure to many Chinese. Add to this the fact that he is blind, is the father of two small children, and has been jailed by corrupt officials on trumped up charges.

But what makes him an iconic figure to his countryman is his exposé of the one-child policy.

Bear in mind that almost every Chinese family has been impacted in some way by the loss of a loved one because of the one-child per family policy. Virtually everyone in China is missing a son or a daughter, or a brother or a sister because some Communist Party hack found out that their wife or mother was pregnant with an “illegal” second or third child, arrested them for the “crime” of being pregnant, and took them in against their will for an abortion.

Chen documented 7,000 such cases, taking down the names and addresses of those women who were victimized, as well as the particulars of the officials who committed these crimes.

Now you can see why the Chinese Communist Party is so eager to silence Chen. Not only has he exposed their crimes against the Chinese people, he has at least the potential to generate massive protests against the brutal one-child policy.

No wonder he is being called China’s Sakharov. Like Sakharov, he has courageously spoken truth to power, and has become the conscience of the Chinese people where forced abortions and forced sterilizations are concerned. Like Sakharov, he deserves the Nobel Peace Prize.

Update: As of May 8, Chen has said by phone that he is hopeful he and his family will be allowed to travel to the U.S. And Vice President Biden has expressed the same hope, stating, “We expect the Chinese to stick to that commitment.” But Chen fears that his remaining relatives in China will suffer reprisals.