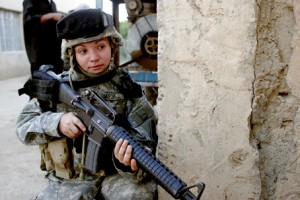 Concerning the question of sending American women into combat, we have thus far looked at the trajectory of the feminist movement, specifically how it went from advocating basic equality between the sexes to perverting and deconstructing sexuality altogether. There have been two distinct and deliberate effects of this radical feminism: the first being a blurring of the line between masculinity and femininity; the second being the creation of an atmosphere of sexual promiscuity, in which sexual intimacy is no longer ordered to marriage and children. Both effects are already proving harmful to women and families, but are also seriously impacting the ability of our armed forces to succeed with their mission.

On a practical level, however, it is important from the outset to consider whether women are capable of the physical rigors of long-term combat operations. One woman who can speak to the question is Captain Katie Petronio, USMC, who was deployed to both Iraq and Afghanistan, where she participated in and led missions in combat zones. Her assessment was firm: “I am here to tell you that we are not all created equal, and attempting to place females in the infantry will not improve the Marine Corps as the Nation’s force-in-readiness or improve our national security.”

After excelling at hockey at Bowdoin College in Maine, she joined the Marines and quickly proved herself a resilient and motivated officer. For five years she kept up with the demands of her units, working 16-hour days as an engineer in extremely rugged terrain. Eventually, months of physical and emotional stress took their toll, and a key concern became obvious. She notes, “I can say with 100 percent assurance that despite my accomplishments, there is no way I could endure the physical demands of the infantrymen whom I worked beside as their combat load and constant deployment cycle would leave me facing medical separation long before the option of retirement.”

Short-term exposure to such grueling efforts or simulated conditions could not reveal what Captain Petronio learned, because it became a question of longevity. When the pressure of combat turns from weeks to months—even years—one has to concede that women’s bodies cannot endure the hardship and fight effectively. If women with compromised physical abilities are encouraged to persevere because of a social experiment, the men around them will be either endangered or imposed upon to take up the slack. That cannot help the overall mission—or the morale.

Captain Petronio has paid a heroic price for her service already. Besides severe muscle atrophy in her legs, she has also been diagnosed with polycystic ovarian syndrome because of what she was exposed to over the course of her deployment. She doesn’t bemoan the loss of her fertility, but wonders who is behind the push for the integration of women into combat units. She is unaware of any female Marines asking for more punishing service options, nor was she aware of any congressional initiatives to that end.

It is evident that civilian special interest groups have driven the agenda thus far, and unfortunately none of them have first-hand knowledge of the military life they are manipulating—which would account for their unrealistic expectations. These ideologues are tinkering with the armed forces without adequate data concerning long-term effects; they are “modifying” essential standards so that women can succeed; and they are ignoring the ultimate good—troop readiness—in order to achieve a perceived good: total sexual parity.

If the United States could be reasonably sure that there were no military entanglements on the near horizon, or if there was a severe shortage of capable men willing to fill the ranks at present, perhaps we could consider a change in policy. In the former case, data could be gathered without endangering lives, and in the latter case self-defense would justify such extraordinary measures.  But with willing men able to deploy on multiple fronts against existing foes, this is not the time to experiment with feminist fantasies—because the consequences are fatal and all too real.

The final segment of this series will look at the Catholic view of women and whether combat can mesh with authentic femininity.