Trending Now
You are at:Home»Featured»Chilling View from the Joint Chiefs
By Genevieve Kineke on January 26, 2013 Featured, Government & Politics, The Social Order 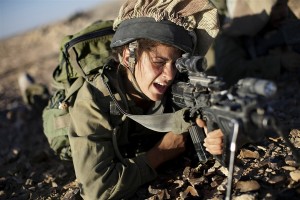 With the recent declaration by the Joint Chiefs of Staff, it would seem that there is an indisputable decision to allow women to serve in combat units in the future. To argue to the contrary might be an exercise in futility—much like closing the barn door after the horses have bolted—but this is not so. A decision that would have been unthinkable fifty years ago (and thus a waste of time in discussing) is now upon us, striking a large segment of our population as deeply wrong, but for reasons that are difficult to put into words. It is for that reason that I’d like to explore the main problems with such a policy, and to harness the elusive arguments that we need to counter it.

The reasons against sending women into combat are many, but the argument in favor of doing so flows organically from the sweeping changes in western culture over the last century—changes that are unhealthy humanly, socially, and spiritually. Given the modern-day consensus concerning the foundational vocations of men and women, the understanding of human sexuality, and the mission of the military, one is nearly tongue-tied in speaking out against the status quo, but it is the underlying premises that we should be disputing.

Feminism over the last century has brought tremendous change to the way that most women understand their lives. Much of the ground-swell support came in reaction to undeniable sexism and strains of misogyny that existed in earlier times—one need only watch old movies and observe what passed for humor to get a taste of what women had to put up with. While certain elements of the shift in attitudes have been welcome, there are also aspects of the feminist revolution that are violently destructive to the feminine vocation. To begin, it is important to make distinctions among the strains of feminism, which have differing objectives.

Early in the equal rights movement, many feminists that we now call equity feminists believed that men and women share a common dignity, and should share an equal standing before the law. In terms of education, inheritance, and employment, this version of feminism provided a noble contribution to society overall, because there was no effort to dispute the fundamental differences between men and women. Because of these initial efforts, women gained access to many schools and jobs from which they had either been legally barred or discouraged from pursuing by cultural norms.

It must be noted that the Catholic Church has always delighted in the tremendous gifts of women. Even in the earliest centuries, the equal dignity of girls was firmly taught, and wherever the faith took root, women religious made possible the growth of schools, hospitals, orphanages, and other venues that allowed women to leave the home and enrich their communities. It cannot be disputed, though, that after the Protestant reformation—and the attendant loss of the religious profession for women—many opportunities for women were lost. While basic Christianity honored motherhood and appreciated femininity, marriage was the only option for most women, and there were fewer opportunities, especially for higher education. These were the circumstances which led to popular discontent among women.

After the first wave of feminist reaction to sexism in society, a more radical form of thinking took root, which established a deeply problematic view. At the height of the sexual revolution, these radical feminists incorporated into their philosophy the express notion that sexual license is a fundamental human right. Despite their anger towards the double-standard that has often existed—allowing men to be promiscuous and irresponsible—they chose not to demand sexual purity for all, but rather to pursue those ends that would allow women to be promiscuous without public censure or consequence. Thus, widespread access to contraception and abortion became essential parts of the agenda, and of such thinking Sandra Fluke stands as proud witness even today.

One further wave of feminism—which has prevailed in the last decade—contributes to the current situation. Gender feminism emerged, joining forces with many other streams of deconstructionist thought. Thus, we are faced with the attempted redefinition of marriage, the normalization of cross-gendered behaviors, and rampant sexual exhibitionism in ways that spare none—not even our youngest children. The traditional understanding of motherhood and fatherhood is deplored as sexist and reactionary, and those who raise the question of Biblical values and natural law are being shunned as bigots and haters.

Together, these groups have relentlessly pushed an androgynous view of humanity in which all cultural norms are dismissed as mere artificial constructs that inhibit human freedom. Such is the social landscape in which the Joint Chiefs of Staff have acted, buckling to current trends and caving to philosophies that are just as pernicious as enemy combatants.

In the next installment, we will consider how the military has already caved to the sexual revolution and shifted its entire mission as a result.