Trending Now
You are at:Home»Featured»Christmas in a Stricken Community: Where was God?
By Dr. Gerard Nadal on January 1, 2016 Featured, Those in Need 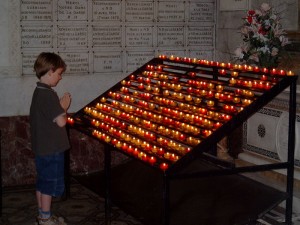 Living in a community stricken by scores of deaths each year from pills and cheap heroin of unprecedented potency, the question of where God was is raised in thousands of hearts in unfathomable grief. Our young people are getting addicted and dying in epidemic proportions. These are good kids, from good homes, good schools, good sports teams and scouting units, good churches and good neighbors. So, where was God?

It is the plaintive cry of Martha at the death of Lazarus, “Lord if you had been here, my brother would not have died.”

But God was there with our young people. He’s been there all along. We don’t recognize His face because it looks too much like the parents,

and the countless others who role-model good, clean living; who exhort our young to avoid evil and to do good.

We never ask where God was at the graduation ceremonies, sports awards, confirmations and communions, and the thousand other good things that happened in the life of the child. That’s normal.

We expect that somehow He should pull a miracle at the hour of peril and save the young from the consequences of a single, reckless decision. What parent wouldn’t trade their own life for their children’s? Yet, that’s what today is all about. He did just that. The nativity and the cross align on the same salvific axis. The Divine Condescension of God taking on human flesh, teaching us in simple parables and profound commands, and finally, the self-sacrifice to free us from the eternal consequences of our own rebellion.

“Honor your father and your mother, so that you may live long in the land the Lord your God is giving you.”

That land is the land of adulthood, with the glories of marriage, and the love of a husband or wife, of children and grandchildren, of career and contribution, of savoring so much of a beautiful world and all of its many wonders. And it can all be lost in a single act of recklessness, of turning to the wrong source to assuage our pain and suffering on the road.

If we are to heal this blight as a community, perhaps the time has come to stop blaming God when it all goes wrong, and to really begin to give Him the attribution for all of the blessings, and the praise when it all goes well. So many curse God in the greatest moment of trial when we should humbly acknowledge that all too often we haven’t played it His way.

“Honor your father and your mother, so that you may live long in the land the Lord your God is giving you.”

To mother and father we should add:

The greatest tragedy in this community is that we are losing so many young people in a community that has an overwhelmingly large number of solid citizens who lavish their time on our young in an unbelievable number of youth activities. The Face of God is everywhere on Staten Island.

The healing and consolation begin with this recognition.