Trending Now
You are at:Home»Featured»Christopher West Refines His Answers, But Questions Remain
By Brian Killian on February 7, 2012 Featured, On Books 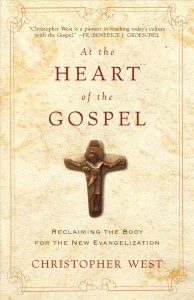 At the Heart of the Gospel, the new book by Christopher West, is the fruit of West’s sabbatical from speaking after controversy broke following a television interview. West’s new book is primarily two things. First, it’s a summary of the main points of West’s lectures and writings over the years. West takes a deep breath, slows down, and lays out his argument step by step. West also marshals plenty of quotations from old and new authorities to back him up. There are plenty of quotes from the Catechism, Pope Benedict XVI, Cardinal Scola, the saints, and of course Pope John Paul II and his Theology of the Body.

The second aspect of the book is West’s response to his critics. In the appendices West addresses two big points of contention. The first is the controversy that has swirled around West’s treatment of the delicate question of sodomy in the context of marital foreplay. The second appendix deals with West’s claims about spousal analogies in the Church’s liturgies — especially the ceremony of blessing the baptismal font. West doesn’t back off of his positions here, but he adds additional explanations and clarification. West also admits that he has made mistakes in his presentations in the past. But he mostly sticks to his guns. And at least on some issues, he certainly should.

The heart of West’s thinking is the ‘great mystery’, the spousal analogy that is found explicitly formulated by Saint Paul in Ephesians 5. This is where Paul says that the ‘one flesh’ union of man and woman found in Genesis is a mystery of Christ and the church. Paul is basically saying that the union of spouses in the sacrament of marriage is an allegory of the mystery of the Church.

Just as sex is the most intimate sign of the spouses love for each other, so the Eucharist is the most intimate sign of the love Christ has for his church. Hence there is a certain analogous relationship between these two forms of becoming ‘one body’. In a sense, making love is the spouses’ Eucharist. And likewise the Eucharist manifests God’s eros towards mankind. This analogy is like a ray of light that illuminates both mysteries in and through each other. This is what West is getting at when he says that the spousal analogy ‘works both ways’.

The implications of this fundamental analogy for the theology of marriage have not always been given very much attention. Revelation does indeed have something to say to spouses even in this most intimate part of their lives. And God intended this relationship in creation from the beginning. The spousal relationship foreshadows in some way the Incarnation. There isn’t any human reality more profound than spousal love to image the love God has for humanity. If there were, Saint Paul would have used that and not the ‘one flesh’ of husband and wife. On the other hand, it’s only the passion, death, and resurrection of Christ that fully reveals this spousal reality and makes of it a ‘sign’.

I believe that West is standing on firm ground here. In so far as West’s critics are attacking the spousal analogy and its implications, they are off base. West is certainly correct to see some Catholics reacting to something perfectly traditional as though it were unorthodox. I’ve seen it myself. But that’s not the whole story.

A Problem of Language

It can’t be discounted that there are a good number of people who find something ‘off’ to West’s writings and talks. I have also found this to be the case. It’s clear from what West writes in this book that he doesn’t intend to present a reductive vision of sexuality, but nonetheless his words do at times give that impression. Why does his writing seem off to many of his critics? Well, here’s my theory.

What’s the difference between these two sentences?

Most people would immediately reject the first statement. The second statement nearly everyone would agree with. What kind of love is at the heart of the gospel? The spousal kind of love. Most people would likely understand that the reference to a spousal kind of love is an analogy. God is not literally male or female. The marriage in the book of Revelation is not a literal human marriage (the form of which is passing away). Sexuality too is implicit in understanding of spousal love.

‘Spousal love’ necessarily connotes sexuality as part of its meaning, because spousal love is ordered toward the fruitfulness of procreation. But the word ‘sex’, or ‘sexuality’, does not necessarily connote love (or at least if it does, the ‘love’ it connotes is much less than ‘spousal love’).Therefore to use the word ‘sex’ or ‘sexuality’ is to lose the spousal context. That’s why no one would accept the statement that sex is the heart of the gospel, no matter how you qualified it. But many would accept that a spousal kind of love is at the heart of the gospel. It matters what words you use.

West says that he wants to rehabilitate words like ‘sex’ and ‘sexuality’ the same way that the Church Fathers rehabilitated the word ‘eros’. It would be an interesting study to see how the Fathers did this with ‘eros’, but West has so far not succeeded in elevating the word ‘sex’ to include a spousal meaning. Consequently if West uses words that do not connote a holistic understanding of love and sexuality, his readers or listeners will understand him to be saying something much more reductive than he intends.

This might be a source of the confusion and hostility of many of West’s critics. His critics have cause for concern, not necessarily because West is thinking wrongly but because he is sometimes using language wrongly. This isn’t just West’s problem. I recently saw a headline for an interview with West as part of his book publicity that read “The Saving Power of Sex”. Sex, of course, doesn’t have any saving power. It would be much truer to speak of the power of Christ to save sex. It’s inappropriate to equate sex with the redemptive power of Christ. Here’s another example.

In Chapter 2, “The Wound of Puritanism”, the very first sentence says: “Pope Benedict XVI observes that a hallmark of Christian faith genuinely lived is ‘the attitude of joy in, and affirmation of the body, of sexuality’. The pope doesn’t use the word ‘hallmark’. Yes, a hallmark of Christian faith is affirmation of the body, but to specify sexuality here puts too fine a point on it. St. Paul wrote about hallmarks of Christian faith genuinely lived. His hallmarks were justice, peace, and the joy that comes from the Holy Spirit. West’s use of the pope’s words makes it seem like Paul forgot to include sexuality. Yes, genuine faith affirms the body and sexuality, but genuine Christians don’t go around celebrating sexuality all the time. West seems to put things out of place or over-emphasize things.

I’ve noticed this dis-integrating effect of West’s language when speaking of the body as well. Paradoxically, when you emphasize the body too much you end up separating it from the person.

Admittedly, this business of trying to elevate language is extremely tricky. West alludes to the problem in his book. It’s a problem that we Catholics should work together to solve. Philosophers, writers, theologians, no one man or woman can tackle this thorny problem alone.

I don’t know how satisfied West’s critics will be with this new book. I have a feeling that they will not be pacified. This book is an apology (as in ‘defense’) for all the positions that have been the most controversial. At least it’s an advancement of the debate because West takes pains to explain as best and as comprehensively as he can those positions that are such a sore spot for his critics. Overall, West has made a stronger case for himself, with plenty of arguments from authority. If West’s critics are still certain of West’s unorthodoxy, the ball is now back in their court.

Brian Killian is a writer, thinker, husband, and father. He studied undergraduate philosophy at a Benedictine university and some graduate philosophy at a Basilian university. He is a perpetual student of rhetoric, new media, the intersection of marketing and evangelisation, and the adventure of life in faith. Since becoming unemployed during the dot-com crash of 2000, he has lived in Canada with his family. He has been a columnist for a small Catholic newspaper in Atlantic Canada, a contributor to several online Catholic portals, and a professional freelance copywriter.