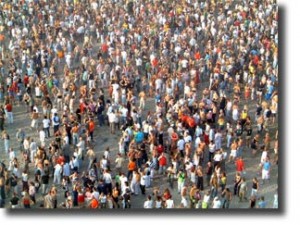 Population control advocates are miffed that the UN Climate Summit in Paris will not address fertility reduction.

“It’s pretty hard to reduce your carbon footprint when you keep adding more feet…” said Population Media Center in a newsletter, a population control group that lingers on the fringes of the Paris negotiations.

The group says world leaders are “irresponsible” for neglecting policies to reduce populations in their efforts to limit carbon emissions. It describes contraception as a cure-all for eliminating poverty, war, crime, and protecting the environment.

Contraception is a “one-off cost” (one time expense), they claim, whose “benefits multiply in perpetuity via each never-existing person’s never-existing descendants.”

The group claims each dollar spent on contraception can avert nearly 1 ton of carbon emissions, and touts the energy saving benefits of preventing “births and hence lifetimes” citing a study paid for by Population Matters.

The study, which does not claim to be peer reviewed, assumes that millions of women who currently do not use contraceptives for reasons such as health concerns and religious objections will decide to—if more money is spent by governments, corporations and donors on contraception.

It relies on the flawed notion of “unmet need” for family planning. Although a powerful fundraising tool, the concept does not measure actual demand for contraceptives. Less than a tenth of women described as having “unmet need” claim to have difficulty obtaining them. The only way to meet the purported “unmet need” would be if women who do not want to use contraceptives were somehow made to use them.

Aside from the defects of the study, the UN Population Division—an authoritative source that has traditionally been sympathetic to fertility reduction—has already debunked the basis of the claims in the study touted by Population Media Matters.

A UN report released earlier this year is arguably the final word on whether investing in contraception should be considered in the arsenal of policies to reduce carbon emissions. It finds that population policies have little impact on carbon emissions compared to changes in production and consumption, and sound environmental policy.

Earlier this year, John Wilmoth, who heads the UN Population Division, criticized the climate change establishment for using flawed science in an attempt to link population to climate. Wilmoth explained that there is “relatively little uncertainty” in population projections over the coming century, but there is “complete uncertainty” about carbon emissions as they relate to population.

Lack of progress on an international agreement on climate change will prove costly to population control efforts.

If the climate talks in Paris are ultimately successful, it will require countries to mobilize unprecedented amounts of resources in an attempt to change to the Earth’s climate. Former U.S. Secretary of State Hillary Clinton and UN Secretary General Ban Ki-moon promised $100 billion a year in climate aid.

Over time these resources would dwarf the public and private development assistance on which population control groups currently rely—and could become their new lifeline if they can convince the world to give them a seat at the table.