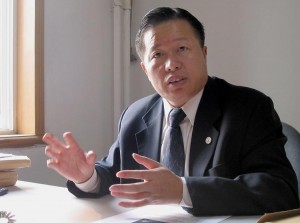 This Tuesday Congressman Chris Smith (R-NJ) chairman of the U.S. China Commission presided at a hearing entitled “The Case and Treatment of Prominent Human Rights Lawyer Gao Zhisheng” with Co-Chairman U.S. Sen. Sherrod Brown (D–OH). At the same time China’s Vice President Xi Jinping (in line to assume the presidency in March 2013) was meeting with President Obama and Vice President Biden in the White House. The Commission met to review the imprisonment of six prominent Chinese dissidents and heard testimony from the wives of two of the jailed men who called for their husbands release. Congressman Smith said he hoped President Obama would not put human rights last on the agenda as he did last January when Chinese President Hu Jintao visited.

Gao Zhisheng’s wife, Geng He, testified that her husband was arrested after he wrote an open letter to the U.S. Congress exposing human rights abuses in China. Mr. Gao, a human rights attorney, advocated for “marginalized groups in China— including religious practitioners, rural workers, and human rights activists.” He has been repeatedly imprisoned since 2006 with Chinese authorities refusing to release information on his whereabouts or condition. His wife describes his arrest:

Policemen covered his head with a black mask and took him into a room where they stripped him naked and beat him. They used electric batons to shock him all over his body—specifically his private parts—turning his skin black. After losing consciousness from the torture, he awoke covered in urine. Later, his captors used cigarette smoke to burn his eyes so severely that he could not open them.

In addition to the human rights abuses experienced by imprisoned dissidents, Congressman Smith addressed the one-child policy in his opening statement.

Today in China, rather than being given maternal care, pregnant women without birth control permits are hunted down and their babies forcibly aborted. They are mocked, belittled and humiliated. There are no single moms in China—except those who somehow evade the family planning cadres and conceal their pregnancy. For three decades, brothers and sisters have been illegal; a mother has absolutely no right to protect her baby from state sponsored violence.

During the hearing Congressman Smith praised President Bush for effectively dealing with China’s human rights abuses while president and criticized the Obama administration for its “quiet diplomacy” efforts which equated to a policy of “indifference.” Witnesses agreed with Smith’s assessment.  Jared Genser, founder of Freedom Now expressed disappointment that the Obama administration ignored requests from the wives of the imprisoned men to meet with them. It was his opinion that movement from the Chinese government on the release of the detainees would only occur if our high level officials engaged in this.

Bob Fu, founder and president of Chia Aid was also critical of the administrations policy of “quiet diplomacy,” saying for the past three years this administration put human rights and religious freedom on the back seat by failing to appoint an Ambassador-at-large for Religious Freedom. Fu believes that a lack of response from the State dept and White House regarding China’s refusal to allow a meeting with the Ambassador and the Chinese government counterpart only emboldened Chinese government officials.

Anticipating the White House meeting with Vice President Xi, several members of Congress sent a letter to President Obama asking him to include specific issues in his meeting. Among them were the ongoing human rights violations including prolonged and illegal detentions and the enforcement of the one-child policy, as well as the intention of China’s military expansion, the trade imbalance and China’s failure to protect intellectual property rights.

Media outlets reported on Tuesday’s White House meeting claiming President Obama was “friendly but firm.” An official White House release of the president’s remarks on human rights seemed to be limited to just one. “On critical issues like human rights we will continue to emphasize what we believe is the importance of recognizing the aspirations and rights of all people,” Obama said. It would seem Congressman Smith’s assessment of the Obama administrations policy of being one of “indifference” would be accurate.