No matter how it is interpreted, the Supreme Court’s ruling on Obamacare was a landmark decision. On June 28th the Court narrowly voted 5-4 that the Patient Protection Affordable Care Act (ACA) or “Obamacare” is a constitutional law properly legislated by congress. Surprising many was Chief Justice John Roberts siding with the usual suspects from the left side of the bench to be the 5th vote and not Justice Kennedy, thereby giving Obamacare the Supreme Court’s blessing. Yes, this is a victory for Obama but one that comes at a high price, as we’ll see later.

The ruling allows the law to remain intact as the law of the land. The only modification the Court made was to rule Congress’s expansion of Medicaid unconstitutional since it threatened states with the forfeiting of their existing Medicaid funds if they did not accept the expansion. Nevertheless, the Court allowed the expansion to go forward with an “opt out” provision that states may choose, enabling them to keep their current Medicaid funding. The seemingly insignificant “opt out” is actually a very important ruling because it sets precedence from the Supreme Court for states’ rights over the Federal Government.

The controversial aspect of the lawsuit and primary reason it was brought before the Supreme Court was whether or not it was constitutional for Congress to mandate by decree of law that individuals must buy health insurance or pay a “penalty” to the IRS. The Court ruled (7-2) that Congress does not have the authority to mandate commerce, the buying and selling of products, to citizens and that the ACA legislated under the premise of a commerce clause was unconstitutional, as it takes away a basic freedom, namely liberty.

The precedent set in this decision limits the Federal Government’s power to regulate commerce. This was a signature decision and exceptional news for many who have fought against those who desire that the Federal Government take over commerce to varying degrees. And Roberts’ genius was to bring two judges from the left to join the right in this ruling, which will certainly bring about lawsuits against the government’s previous and future moves to go too far in controlling commerce.

Interestingly enough, this was the clause under which President Obama was selling the ACA to the public and Congress, and it failed. If Obama’s lawyers had stopped there, the entire Obamacare law would have been struck down as unconstitutional. So what happened?

Despite the fact that Obama repeatedly told Congress and citizens the ACA was not a tax and, now infamously, said in an interview with George Stephanopoulos and thus to the whole world that his healthcare law is “absolutely not a tax increase”, his lawyers then unexpectedly argued before the Supreme Court that it was a tax, even though it was penned a “penalty” in the law. This was, of course, once their commerce argument failed.

In a surprising twist of judicial interpretation, Chief Justice Roberts sided with the “Government” lawyers. He argued his point in the majority opinion as follows:

The most straightforward reading of the individual mandate is that it commands individuals to purchase insurance. But, for the reasons explained, the Commerce Clause does not give Congress that power. It is therefore necessary to turn to the Government’s alternative ar­gument: that the mandate may be upheld as within Congress’s power to “lay and collect Taxes.” Art. I, §8, cl. 1. In pressing its taxing power argument, the Government asks the Court to view the man­date as imposing a tax on those who do not buy that product. Be­cause “every reasonable construction must be resorted to, in order to save a statute from unconstitutionality,” Hooper v. California, 155 U. S. 648, 657, the question is whether it is “fairly possible” to inter­pret the mandate as imposing such a tax, Crowell v. Benson, 285 U. S. 22, 62. Pp. 31-32.

Citing precedence from the above cases, Chief Justice Roberts illustrates he is attempting to rule, as he should, as a bipartisan judge with prudential deference toward the intent of the law as the legislative and executive branches of our government, who we elect to represent us and pass laws reflective of our desires, deemed appropriate and not a judicial activist wielding legislative corrections from the bench that he feels appropriate. This also reflects his high regard for the Supreme Court to truly be a non-partisan institution and not an activist court, which has been their reputation for some time. 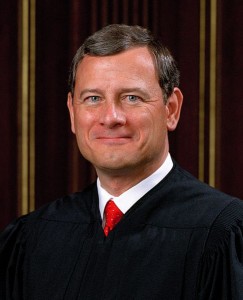 Roberts went on in his opinion to make himself clearer:

The Framers created a Federal Government of limited powers, and assigned to this Court the duty of enforcing those limits. The Court does so today. But the Court does not express an opinion on the wisdom of the Affordable Care Act. Under the Constitution, that judgment is reserved to the people.

He is saying the decision does not embrace Obamacare as good or bad public policy but determines its constitutionality. He continues:

… it is not [the Court’s]job to protect the people from the consequences of their political choices…. We [the Court]possess neither the expertise nor the prerogative to make policy judgments. Those decisions are entrusted to our Nation’s elected leaders, who can be thrown out of office if the people disagree with them.

Not only is he providing greater clarity on his opinion, he is teaching the American people a “supreme” and providentially timed civics tutorial: if you are not satisfied with Obamacare and your representatives who voted it in, vote them out!

Immediately Republican Presidential nominee Mitt Romney and many other Republicans were holding press conferences stating no matter the ruling, Obamacare is still bad policy and we’re calling for Congress to repeal it. In fact, even after the ruling polls still show that the majority of Americans do not like Obamacare. Also there’s good news for those Americans, now that this law has been ruled a tax, it will only takes 51 votes in the Senate to repeal it versus the 60 it needed before, given the Republicans will maintain control of the House in the November elections.

The Effects of the Obamacare Tax

The fact that Obamacare is a tax has highlighted two main, yet disputed concerns, one bad and one good. Your particular value assessment of either will depend upon which side of the political fence you reside.

“The result is that Washington has unlimited power to impose new purchase mandates and the courts will find them constitutional if Congress calls them taxes, or even if it calls them something else and judges call them taxes,” says the Wall Street Journal Editorial Board. “Supreme Court precedents going back to the 1920s and 1930s define penalties and taxes as mutually exclusive and critically different.”

Roberts refutes this assessment in his opinion:

Upholding the individual mandate under the Taxing Clause does not recognize any new federal power. It determines that Congress has used an existing one.

Whatever the result, it will be difficult for our politicians to pull off this trick again, which risks political suicide.

President Obama and the Democrats have lied to Americans and again raised our taxes with the ACA. Obama repeatedly promised in speeches, “I will not raise taxes one single dime.” Forbes contributor Merrill Matthews, financial and health care expert, reports “the mandate becomes the largest tax increase in U.S. history. …. And because the cost of the coverage will be similar even though incomes vary significantly, the lower the income the higher the effective tax rate – in essence, the most regressive tax in U.S. history, too.” Whether it is the largest ever or not, the fact is that Obamacare will be a huge tax increase, especially on the very citizens who Obama and the Democrats say they wish to rescue financially, middle class American families.

So the Court has made the new Obama tax a hot political issue in a very important election year that will help more Republican candidates get elected to Congress in November than Democrats, and maybe even put a Republican president in the White House. Only time will tell.

The Legal Question of Constitutionality

At the core of the ruling is a heated debate over the constitutionality of the Chief Justice’s decision in his ruling Obamacare a tax? Did he actually rewrite the law which called the mandate a “penalty” and make it a tax? That is what the dissenting opinion articulated in a strong argument, as well as many others. Obviously, intelligent legal minds have studied the case and thought differently than the majority. So were they correct?

Let’s first consider the contrary argument. Didn’t everyone in Congress know it was a tax? That’s what every Republican was saying after receiving the consultation of their lawyers, right? So how is it now deemed rewriting the law to call it a tax when everyone knew it was a tax to begin with? Let’s not forget, Obama’s lawyers actually argued this was the Federal Government’s intention, as seen above in the opinion, and asked for the Court to consider it so in defense of the legislation. Was Roberts simply calling it like it is?

The answer comes down to your judgment and that of history. Whether Roberts knowingly and willfully made the right or wrong decision and broke his vow to the U.S. Constitution, as some have postulated, we certainly cannot know, as that falls within the interior forum of his soul which God alone can know and judge.

The Future of the Health and Human
Services (HHS) Mandate

Now that the Supreme Court has rendered Obamacare valid law, its HHS mandate is still very much alive and our freedoms to freely exercise our religion and conscience are still in peril. If you’ve forgotten, the mandate requires all employer health insurance plans to provide free contraceptives, sterilizations and abortion-inducing drugs, regardless of any moral or religious objections.

So the numerous lawsuits against the HHS mandate will continue to move forward to the Supreme Court. Most likely it will be struck down by the Court considering four justices (Scalia, Kennedy, Thomas, and Alito) voted against Obamacare altogether and Roberts’ previous opinions suggest he will join them.

It is interesting to note that Roberts’ ruling on Obamacare, which appeases the critics who say the Court rules only along political lines, also sets the Court up nicely to strike down the HHS mandate and not be considered a one-sided, conservative, activist Court in doing so; as well as setting itself up for other controversial cases in their future.

Overall, the objective wins for Chief Justice John Roberts, America and her people contained within this historic ruling outweigh any losses that may have occurred.

Most urgently, since there is no guarantee the Supreme Court will overturn the HHS mandate, Americans must mobilize politically and vote for representatives in November who will repeal it. We, America’s citizens, must continue in our resolve to do all we can to protect and defend our U.S. and state constitutional rights, against the growing trend of those who wish to eradicate them. Let us remember that these are the inalienable rights of life, liberty and the pursuit of happiness, to which freedom of religion and conscience belong.

Don’t give up the fight!