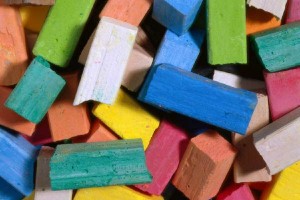 You’ve got to take whatever life throws at you.  And if you’re a parent, you probably have to wipe it up, too — especially when it comes to craft time.

Few words can strike more fear in the hearts of parents with young toddlers than “craft time.”  When the paint is flying and the glue is dripping, things can get a little distressing—particularly for your furniture.

I’m always interested in old parenting “how-to” books from yesteryear, and in one from 1964 called “A Do-It-Yourself Guide to Family Fun and Recreation” by Richard Frisbee, I found this about craft time:

Creativity involves curiosity, experimentation, exploration.  From the parent’s point of view, it also involves messes—crayon faces in the wrong places, spilled paint and chemicals, widely strewn paper and cloth scraps—and noise.  The natural reaction is to put a stop to it.

Some parents I know just refuse to do crafts at home, probably because they’ve seen our carpets.  Because in our family, we love drippy, sparkly, sticky, gooey, colorful old craft time.  We are frequent crafters, and our multi-colored kid’s crafting table proudly bears the mark of many a happy, creative afternoon.  At least once a day, sometimes twice or even thrice, our older daughter will say:  “I want to do a craft.”  The one year old simply exclaims:  “Craft!”  And so we delve into our supply of glue and glitter; string and scissors; buttons, bows, and “who-knows” (which are all the little bits of odd things saved for ‘who-knows-what,’ since you just never know when you might need something exactly like that), and begin creating.

Each time we do, a new mystery is afoot.  Because no matter what our intentions at the outset, we can never be sure where our crafting will take us.  I’ve finally learned, after years of collecting data in the wild, that starting a new craft means embarking on a journey into the unknown.  And strangely, the unexpected twists and turns of the creative process used to be just about as stress inducing as the mess potential.  Spills I learned to anticipate (more or less), and take appropriate advanced precautions to mediate the damage.  With sponges at the ready and only washable paints deployed at the table, and an old dumpster-fodder throw rug protecting the floor, Daddy could deal with most vicissitudes of crafting’s dirty side.  But I’ve never figured how to predict the final destination of the crafting odyssey once we set out on the road of pre-school creativity.

My best laid plans, my most carefully assembled supplies, my most assiduously detailed step-by-step road map for craft completion, rarely do any of them bare much resemblance to the craft as it actually unfolds in the real world.

Take our Bear Caves.  Our girls love the “Big Bear, Little Bear” books by Waddell and Firth.  So, I thought, why not make our own bear caves out of cardboard boxes?  First we’d scour the park for little pebbles, then save some cardboard boxes from packages that come in the mail, and glue the stones onto the boxes.  We’d cut flaps out of the boxes for doors and windows, and glue sticks on our diminutive portals of ingress and egress for a little natural-wood charm to offset the austerity of our stone walls.  In the end, we’d have beautifully rustic little bear caves we could decorate with furniture made from spools of thread, those little three-legged plastic tables that come in pizza delivery boxes, and stamps for pictures on the wall.

Things started well.  We had great fun amassing a pyramid of pebbles in the park.  Back at home the girls loved squeezing the tubes of glue as hard as they could and spreading the gooey gunk all over the boxes.  Next we started pressing our little stones into the glue.  So far, so good.  All was going according to plan and we had pleasantly rugged mini-grizzly caverns in the early stages of gestation.

But craft time is fluid and dynamic, not static.  What you see one moment changes the next.  Liz, our older daughter, put down her little handful of pebbles and ran off.  She came back bearing a bucket of “jewels”—colored glass stones we acquired to serve as fairy treasures for another craft.

“Look how pretty these are on my bear cave!”  Liz enthused as she arranged them onto the glue of her cave walls.  Then she actually started removing the park stones that were already stuck onto the cardboard and replacing them with her fairy jewels.  Brown and grey rock gave way to shiny bits of pink and lavender.

Soon her little sister joined in the act, retrieving a jar of marbles to add a splash of color to her Bear Cave.  Next, out came their plastic bracelet-making beads and suddenly our bear abodes sparkled with peach-colored plastic butterflies and fuchsia stars.  My rough-hued vision of wilderness crafting faded before a burgeoning panoply of flowers and jewels spread in a pastel harmony of pinks and purples, salmon and sky-blue, like a princess rainbow across the walls of the Bear Caves.

I found all this very disconcerting.  Bear caves are supposed to be dens for fearsome, shaggy beasts of tooth and claw that lumber through forests primeval and ramble the rocky heights of untamed mountains.  There are no gems or jewels, hearts or butterflies on bear caves.  Only sticks and stones:  black, brown, and gray.  Some natural wood accents on the doors and windows is acceptable.  But definitely no lavender or fuchsia.

Our whole project was transmogrifying from a bear cave into Tinkerbell’s summer cottage.

Times like these I struggle to stay my hand.  I have to check a tendency to want to force things to adhere to my own preconceived script.  In battling this desire to control and mold, to remake the world in my own image, craft time has become for me one of the many little homilies of the Domestic Church.  It’s been a lesson in what Scripture tells us:  “In his mind a man plans his course, but the Lord directs his steps.”  Prv 16, 9.

After all, the thing with crafting is the doing.  It’s the exercise of imagination and motor skills.  Learning to overcome obstacles and find a way to get things done.  Developing foresight, expanding the event horizon beyond the next five minutes and starting to realize that bigger things can be achieved with applied effort over a period of days, or even weeks.  And of course, crafts are about fun:  engaging the world of God’s creation, exploring, and getting your hands dirty.

And those very skills:  creativity, finding a way to get things done, imagination and inspiration, getting your hands dirty, just doing, are the very elements of the unexpected that lead away from Daddy’s preconceived notions into uncharted waters.

As it is with crafts, so it is with life.  Things don’t always (or maybe I should say “often”) go as we expect.  Life is a journey into unexplored territory, and we’ve got to deal with the surprising twists and turns as they come, clean-up the inevitable spills along the way, and realize we’re not really in control.  The very things that make a life well-lived and worth living are themselves elements of the unexpected, leading us away from the courses we plot for ourselves and onto the grand pilgrimage into the unknown that God calls us to.  When we are willing to leave the confines of our own ways and step into that larger unknown, wonderful surprises await us, like when we set out seeking only stones and instead find beautiful jewels.