WARNING! SPOILERS AHEAD. (That is if you want to read Inferno of your own free will.) 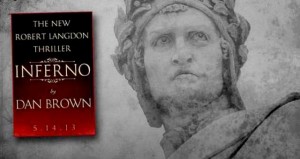 I recently had the displeasure of reading Dan Brown’s new novel, Inferno, because I heard it had transhumanist themes. Essentially, it was the same book as Angels and Demons and The Da Vinci Code except this time the backdrop was Florence, Venice and Istanbul instead of Rome. In characteristic Dan Brown style, the research was shoddy, the Catholic Church was the bad guy, and complex issues and philosophies were given the shallowest of treatments leaving the average reader believing in fiction set up as fact. As a result, I found this book beyond painful to read. Considering that I love to read just about anything, that is saying quite a bit.

Where do I begin? First, Brown sets up a fictional problem — human overpopulation — and awkwardly places it in the middle of secret codes and Renaissance art, fiction and architecture. Of course, Robert Langdon is back to race all over European cities trying to stop something sinister.

The sinister event is the release of a deadly virus engineered by transhumanist and brilliant biologist, Bertrand Zobrist. Zobrist sees himself as a martyr willing to do what others won’t.  Zobrist insists that if the human population does not dramatically reduce now our world will become just like Dante’s fictional depiction of Hell in the infinitely better work The Divine Comedy. (Hence the title of the book, Inferno.)

Both the “villain” Zobrist and the “heroine” Sienna Brooks, a young, genius doctor who befriends Robert Langdon in his mad dash all over Florence trying to stop Zobrist’s plague, are insistent that because we keep having children (and the “evil” Catholic Church discourages the use of contraception) the demise of the human race is inevitable. Sienna actually tells Langdon:

“I can tell you without a doubt that without some kind of drastic change, the end of our species is coming. And it’s coming fast. It won’t be fire, brimstone, apocalypse, or nuclear war . . . it will be total collapse due to the number of people on the planet. The mathematics is indisputable.”

Wait. I have heard that before. Ah yes. First it was Robert Malthus in the late 18th century warning us of catastrophe because of overpopulation — catastrophe that has yet to happen. Then it was Paul Ehlrich, in his book The Population Bomb, (the cover of which asks, “Population control or race to oblivion?”) who told us that because of overpopulation, there would be mass famine by the 1980s. I am sure Ehlrich thought his math was indisputable too.

Of course, Brown does not take the time to debunk the overpopulation myth. A quick look at the United Nations Department of Economic and Social Affairs Population Division report World Population to 2300 would have revealed that the human population is estimated to level out under 9 billion and then decline. Or a quick Internet search would have shown that the UN Food and Agriculture Organization predicts that by 2030 global food production will exceed the population growth. Ah details. They get in the way of a good fictional narrative where the world’s problems can be blamed on the Catholic Church.

Zobrist is a transhumanist who is eager for the advent of the “post-human,” an engineered human that is resistant to illness, ignorance and death. Zobrist is afraid that the catastrophe of human overpopulation will destroy us all before we can become “post-humans” that can live better lives longer. Never mind that human overpopulation might actually be a problem if all humans could live for hundreds of years or even forever. Zobrist also commits suicide which seems as likely for a “want to live forever” transhumanist as it would be for a devout Catholic.

At first it seems that Brown treats transhumanism properly, as a dangerous philosophy that will create a two-tiered society where the rich are not just richer but also biologically superior. Brown even mentions the similarities between transhumanism and eugenics. Langdon, when he first hears of transhumanist ideas, says, “Sounds ominous.”

But from there everything goes downhill in a hurry. Turns out Sienna was Zobrist’s lover and is also a transhumanist. She is the “good” kind of transhumanist. The super smart, compassionate kind that everyone can love. And when they finally find Zobrist’s “plague” under Istanbul, it has already been released. It is not a plague after all; just a sweet little virus that renders one-third of the population sterile and the other two-thirds less fertile.

Once all the plot twists are revealed, the characters don’t seem all that bothered with Zobrist’s crime. They all kind of say, “Oh well. Damage done. But bigger problem solved. And no one had to die.” The reader of Inferno is left thinking that the forced sterilization of 2.3 billion people without their consent is no big deal and I can imagine many readers may even secretly wish a non-fiction Zobrist would emerge to “save us from ourselves.”

I was left feeling that Brown is a closet transhumanist. The reviewer for H+, the transhumanist magazine, had the same idea:

Despite the fact that he has his hero Langdon reply “Sounds ominous.” when he first learns about tranhsumanism, his transhumanist side kick and misunderstod [sic]heroine FS 2080 has the first name “Sienna”, a type of brown.  This was a conscious choice of the author and not an accident obviously.

After I finished the book I started to suspect Dan Brown is a secret transhumanist and was hanging out on some transhumanist forums around 2010-2011 under a pseudonym.

While Inferno does expose transhumanism’s links to eugenics, especially in the forced sterilization arena, the problem is that Brown leaves the reader wondering, “What is the harm?” I am sure the populace during the early 20th century eugenics movement felt the same about the forced sterilizations that went on in the name of “bettering mankind.” Let us never forget that eugenics was the tinder for the Holocaust in World War II.

So while Brown seems to have no major beef with transhumanism, I still agree with Francis Fukuyama, economist at the Johns Hopkins School of Advanced International Studies, that transhumanism just maybe an idea that poses “greatest threat to the welfare of humanity.”