Trending Now
You are at:Home»Columnists»Dawn of the Living Dead
By Rev. Tucker Cordani on April 5, 2015 Columnists, Evangelization, Featured 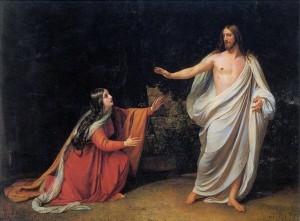 Mary Magdalene wept. Inconsolable. Bereft. Her mind raced. What’s going on here? she thought. I think I need to go lie down, put a warm towel across my forehead and drink a cup of herbal tea.

Too much, too soon, too fast, and I can’t wrap my mind around it.

They say it is darkest before the dawn and so it appeared to Maggie. She cried, “The Lord is dead.” Worse, the body of he who raised her from the gutter was stolen by grave robbers!

She only told the Carpenter that she was a farm girl to hide the truth of her former life of ill-repute. She went off the reservation. How could he who knows all not know about her?

Lord, you know everything, you know that I love you.

When he wrote her name in the sand she still bore the bruises on her cheeks from the stones that the hypocrites hurled at her as retribution for her former occupation as an all-night girl.

Every sinner has a future; every saint has a past.

But the Lord, who was kind and merciful, met her where she was. He admitted her to the prestigious College of Apostles. Title IX (9)? I don’t think so. He saw something in her that she could not see in herself: mercy, the hallmark of the Christian.

Jesus was down with the women’s movement and he commissioned Maggie, formerly of the Jerusalem red-light district, to be the Apostle to the Apostles.

Maggie was first responder to the Resurrection. She saw and she believed. Now she dared to speak.

What Maggie could not yet understand was that, with the death of the Lord, a new era began in history: the breakdown of the barrier between life and death, truth and lies, love and hate, fortitude and fear. In a word—Resurrection.

The Resurrection is the greatest event in human history, along with the Incarnation that preceded Christ’s rising from the dead. God became one of us. Like us, he died. Then he rose. No more fear of death—death was only the beginning. As with an onion, we can peel back the layers with stinging tears but never reach the core. Too much of everything is never enough.

It’s a matter of faith, and if we’re honest with ourselves we don’t have to think too hard on it.

If we believe that God created the heavens and the earth and turned himself into a man to walk but thirty years among us, then it’s possible to understand, albeit cursorily, that he raised his Son Jesus from the dead. Let’s think on that a moment.

Maggie held great faith in Jesus. He forgave her sins. He raised her up. He revealed to her his plan of salvation.

That morning in the cemetery sealed the deal for this most devoted Apostle. She didn’t just understand. She was convinced. Empowered.

“How can I repay the Lord for his goodness to me,” she thought.

Tell her story to another Christian. Be all she could be: a messenger. That’s what the apostle is born to be.

We are the Apostles of the new generation. We have a story to tell.

The Resurrection is not a question to be answered, but a mystery to be solved. I prefer to follow the money until I stand before God who says, “You in your hardness of heart, I told you so, O yee of little faith.”

Acceptance of the truth overrides my shameful disbelief.

At sunrise a gravedigger appeared to Maggie, dressed in sheets as white as the woman’s face. “Woman, why are you weeping? Why do you seek the living among the dead? Behold, he is not here; he has been raised.”

Nolo me tangere. “Don’t touch me,” Jesus told Maggie, “for I have not yet ascended to my Father.”

“Atta girl. Now go. Tell Peter and his mob to get off their duffs and to start moving. We’ve got work to do.”

“What if they don’t believe me?” she asked.

“Tell them to turn off ESPN, put away the Xbox, get out the door, light out, and look around.” In other words, preach the gospel.

The conversation with a man she believed to be dead, but who was alive, enlightened and empowered the mind of this timid woman.

An evangelizer is somebody who fearlessly proclaims the Word of God. Now Maggie was prepared in ways she never thought possible.

Jesus held great faith in her. He saw in her what she could not see in herself.

Despite her incredulity she remembered her Job. “I know that my redeemer lives and in the end he will stand upon the earth.”

She was friends with the Woman at the Well, four times divorced, who said, “I know that the Messiah is coming, the one called Christ; when he comes he will tell us everything.”

Experience is the best teacher. Everything appeared as it was: in Christ.

From beyond the grave the Christ, he speaks — to me, to you, to them, to everybody. Everybody needs somebody to love.

The mystery of the Resurrection may never be solved. When we celebrate Easter we stand among the pioneers who lived, loved, evangelized, and were martyred because they believed that the words spoken by Jesus about his passion, death, and resurrection are true.

Questions abound. Christ is the answer. Bank on it.

Neither a wise man nor a fool would die for a lie. The Easter proclamation is Ancestry.com, the story of our forebears who blazed great trails.

The Song Remains the Same. May we remain on the same song sheet.

Augustine wrote, “He who sings prays twice.” Glory to God in the highest! Sing! glory to God!