During the subcommittee hearing, Rep. Tim Murphy (R-Pa.) said that contraception provided by insurance companies to people employed by religious organizations under the future form of the rule Sebelius described would not be was not free.

“Who pays for it? There’s no such thing as a free service,” Murphy asked.

Sebelius responded that that is not the case with insurance.

“The reduction in the number of pregnancies compensates for cost of contraception,” Sebelius answered.

Murphy expressed surprise by the answer.

“So you are saying, by not having babies born, we are going to save money on health care?” Murphy asked.

Sebelius replied, “Providing contraception is a critical preventive health benefit for women and for their children.”

“Not having babies born is a critical benefit. This is absolutely amazing to me. I yield back,” he said.

Sebelius responded, “Family planning is a critical health benefit in this country, according to the Institute of Medicine.” 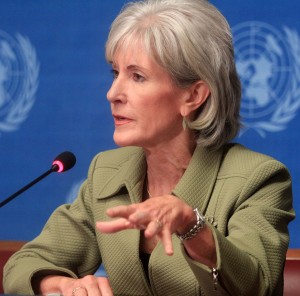 Quite aside from the fact that nobody is incensed that the government is now directing private industry to provide goods and services for free, the twin claims that decreasing the population offsets the cost of such mandates to industry, and that contraception is a, “critical preventive health benefit for women and for their children,” tell us all we need to know about the depravity of the political left in this nation.

Lowering cholesterol and salt intake are “critical preventive health benefits” as they prevent disease states such as atherosclerosis, hypertension, etc.

Eliminating tobacco is a “critical preventive health benefit” as it reduces chances of developing lung and throat cancer.

Now we are told by the HHS Secretary that pregnancy is a potential health risk not only to women, but their existing children as well. This is the trajectory the twin evils of abortion and contraception have had us on all along. No less a prophet than Blessed Mother Theresa of Calcutta saw this coming decades ago:

America needs no words from me to see how your decision in Roe v. Wade has deformed a great nation. The so-called right to abortion has pitted mothers against their children and women against men. It has sown violence and discord at the heart of the most intimate human relationships. It has aggravated the derogation of the father’s role in an increasingly fatherless society. It has portrayed the greatest of gifts — a child — as a competitor, an intrusion, and an inconvenience. It has nominally accorded mothers unfettered dominion over the independent lives of their physically dependent sons and daughters

And, in granting this unconscionable power, it has exposed many women to unjust and selfish demands from their husbands or other sexual partners. Human rights are not a privilege conferred by government. They are every human being’s entitlement by virtue of his humanity. The right to life does not depend, and must not be declared to be contingent, on the pleasure of anyone else, not even a parent or a sovereign.

While it is axiomatic that families and nations do not grow and prosper by shrinking, the question needs to be asked. What is behind the political left’s emphasis on reducing the size of our population, especially in light of the dwindling numbers of employees who will be available to support retirees on Social Security, Medicaid and Medicare?

It seems to me that the Obama crew has it entirely wrong. The only way to fix the funding shortfalls for senior citizen programs is to increase the size of the nation, her tax-paying workforce, and the size of her economy. Having aborted 54 million citizens over the past 39 years, as well as the offspring they’ll never have, has devastated our senior entitlement programs.

Again, it is axiomatic that growth and prosperity are tied to…

There is no logical, economic, political, or philosophical explanation for the model of stewardship espoused by the left. Sebelius has revealed, again, the pitting of the mother against the child of the womb and has now added the pitting of the child of the womb against its siblings. She has reduced pregnancy to the level of a disease state in the Federal system of health management.

The most merciful thing that the large family does to one of its infant members is to kill it. The same factors which create the terrible infant mortality rate, and which swell the death rate of children between the ages of one and five, operate even more extensively to lower the health rate of the surviving members. Moreover, the overcrowded homes of large families reared in poverty contribute to this condition. Lack of medical attention is still another factor, so that the child who must struggle for health in competition with other members of a closely packed family has still great difficulties to meet after its poor constitution and malnutrition have been accounted for.

From “Woman and the New Race,” page 63. Book can be read online here.

Such sentiments from two prominent Catholic women arise from the crosscurrents of poorly formed morality and ethics, and encountering human suffering. It would seem that in the Sanger-Sebelius circles not much has changed in 90 years. Their response to suffering and death is not charity and expanding economic opportunity. The response is more death.

It is a cramped worldview that sees human struggle and only envisions death, or nonexistence as the solution. We can do better than these people.