Trending Now
You are at:Home»Featured»Deer Season a Half Century Ago
By Dr. Paul Kengor on November 28, 2011 Featured, Men 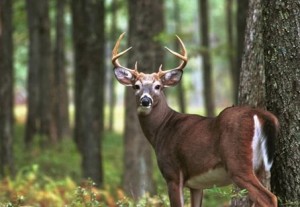 This week hunters across America storm the woods loaded for deer. For yet another indication of how times have changed, consider this account of Deer Season a half century ago:

My mother’s family lived in Emporium, Pennsylvania, as did dozens of their relatives. Emporium is a tiny town nestled in the mountains near the north/central part of the state. Back in the 1940s, when my mother was born, my grandmother had worked as a Rosie Riveter at the Sylvania plant. Some reading this article will remember owning a huge, heavy Sylvania TV—back when you got only three channels.

Sylvania employed half the town. Farming was another means of employment, which my grandfather and his parents and nine siblings had done down the road in Rich Valley.

Still, neither Sylvania nor farming nor anything else did much to populate tiny Emporium.

Once a year, however, the place was flooded with people. That time of year was Deer Season, when out-of-town hunters arrived like an incoming Army, loaded with rifles and bullets. “Army” is a good metaphor, given that a large portion of the hunters were World War II vets. They came from the mills and mines of Pittsburgh and Western Pennsylvania. They came to shoot a deer.

During that special week, Emporium’s streets were bustling, the bars were jammed, and churches had more people than usual, including St. Mark’s, where hunters sought out the priest for a blessing before heading into the woods.

The lone hotel was full, leaving hunters looking for lodging. Some packed into makeshift hunting camps. Some slept in their cars. Sleeping in a car was no big deal to guys who had fought in Germany, France, the Battle of the Bulge. Nonetheless, they searched for a place with a roof, heat, a bathroom—which brings me to my main focus:

My grandmother always took in boarders during Deer Season. In fact, the whole town did. Up and down every street, hunters knocked on doors asking if the home was taking boarders. Bear in mind, these were complete strangers carrying guns and lots of ammunition. And yet, there was never any fear that they were a threat to a household.

“I never heard of any problems anywhere,” recalls my mother, who was a little girl when the hunters stayed at her house. “There was never any concern about the safety of anyone, including the kids. Today you can’t trust anyone. It was different then.”

It was very different. There was also a general trust of hunters, a trust I believe is still merited and shared in those areas. My Uncle Carl, my mom’s brother, says, “I still think that hunters are a special breed and even though they kill animals most are very caring, trustworthy, and law abiding.”

My uncle remembers my grandparents taking in so many people that he lost track. “During hunting season our house was a zoo,” he says.

For a few dollars per person, my grandparents hosted two or three hunters per night, giving them a bedroom and maybe the backroom. The hunters marched inside with all their gear. As evening fell, early in the winter, my grandmother made dinner for everyone. They all shared a meal. The hunters talked and played and joked with the kids. After dinner, they got their equipment in order and went to bed—snoring loudly through the night.

Around 5:00 a.m., my grandmother made breakfast for the hunters, typically bacon and ham and eggs.

The meals were special. “I enjoyed the stories at night and breakfast in the morning as much as the hunting,” says my uncle.

Then they were off to the woods. If they shot a deer early, some headed straight back to Pittsburgh, hoisting the gutted carcass atop the Oldsmobile. Others, if they got a deer late, might return to the house, where my grandmother cooked up some venison. If they had no luck, they stayed another night or two.

This scene was repeated in house after house in Emporium. My Aunt Della, who lived across the railroad tracks and river, took in boarders in an apartment above her garage. She tended to get the same guys year to year. I’m sure her Rigatoni and meatballs were a factor.

Can you imagine this today? Any of this?

Yes, the culture has really changed. America has changed.